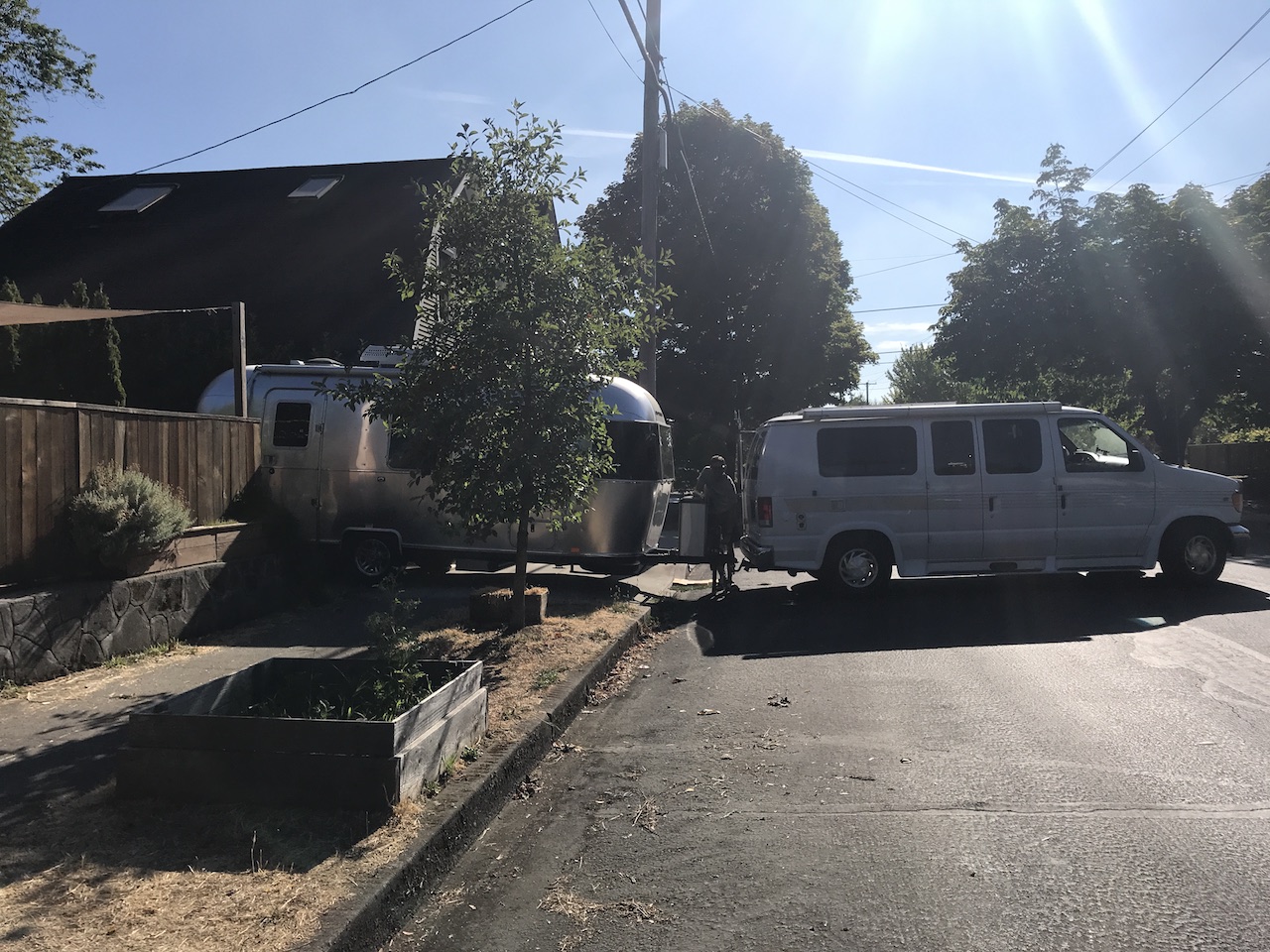 The Airstream Sport 22 unfortunately comes out of the factory with very low ground clearance.  The grey water tank hangs down below the frame of the camper at the rear, where it drags pulling into and out of driveways that have more than a negligible slope.  More than once we’ve winced as the tank made a terrible grinding sound as it dragged across the asphalt on the way out of a gas station parking lot.  It was time to give this Airstream a lift.

Getting Wobbles into our Driveway

Prior to the lift, getting Wobbles the Airstream into our driveway was a multi-hour maneuver, involving multiple different height hitches and wooden blocks to make a ramp.

After returning from a trip, first we would park on the street and change from our load distributing hitch to a hitch with a 4″ drop.  Dropping the hitch 4″ would raise the back of the camper up about the same distance, giving us enough clearance for the gray water tank and sewer drain at the rear.  We would then place some wooden blocks at the point where the side of the street meets our driveway ramp (the lowest point).  Slowly, we’d back the trailer up until the grey water tank cleared the top of our driveway ramp.  Soon, the spare tire holder at the front of the trailer would begin rubbing on the driveway.

At this point we would stop, unhitch, change to a hitch with a 2″ rise, and re-hitch the trailer.  All the while our van would be pretty much blocking the street, so I was in a panic to hitch up as fast as possible.  With the higher hitch the spare tire holder would just barely clear the driveway.

I ordered the lift kit from Dexter, the company that makes the axles that Airstream uses.  The lift kit (Dexter #11 Lift Kit) was designed for 2-axle trailers, so it came with twice as many parts as I needed, so I sold the other half of the kit to another Airstream Sport 22 owner.

Airstream doesn’t approve of lift kits, so having the dealer do the install was out of the question (I asked and they declined).  I was nervous about jacking up the trailer, as I don’t have a lot of experience with such things (nor do I have any jacks).  Fortunately, my friend Josh had both the equipment and experience.  I brought the trailer over to his driveway and we got to work.

The install took us about 4 hours.  It involved jacking up the trailer, removing the bolts holding the axle in place, dropping the axle about 3″ using a hydraulic jack, inserting the spacer blocks from the lift kit, and bolting everything back together.

While the wheels were off, I also took the opportunity to touch up a few rust spots around the wheel wells with some Rustoleum spray paint.

The only real complication was that for some unknown reason Airstream chose to run the propane line through the axle bracket.  They must have run the copper pipe through prior to flaring the ends, as it did not fit back out through.  Since I didn’t have a replacement propane line, I chose to just bend the copper pipe downward with the axle.  It’s not the prettiest solution, and perhaps some day I will replace the pipe with a new one and run it up above the axle.

I’ve only done a short test drive after installing the lift kit, but it felt like it towed just as good as before.  The best part: I was able to back straight into our driveway without any blocks or hitch changes!

16 Comments on “Giving our Airstream a lift”