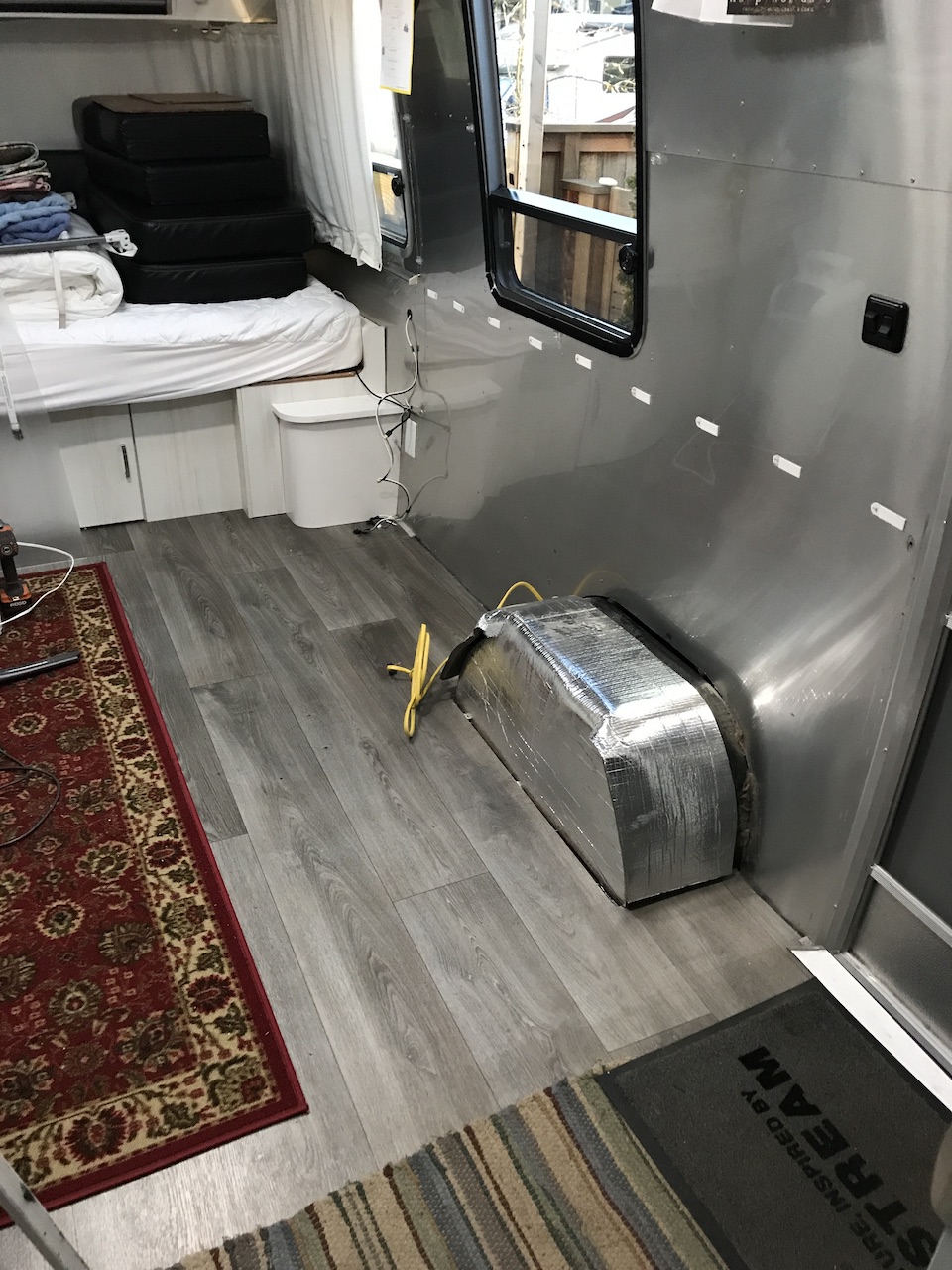 We loved our little Airstream Sport 22 camper during our 5-month adventure. However, having the girls both share the dinette bed isn’t totally ideal. Our 5-year-old told us she missed having her own bed. To that end, it’s my goal to replace the dinette in the Airstream with bunk beds.

Why we’re removing the dinette

Reason 1: We don’t use it often

It sounded really great in theory, being able to convert the dinette into a bed for our 2 girls at night and then back into a dining table during the day. We could have a good sized table to eat at AND a place for our girls to sleep, all within our tiny confines.

However, the reality is that in the 5 months that we travelled this winter, we probably only converted their bed back into a dinette about 3-4 times. It’s funny, because it’s really not that hard to do– it probably takes 5 minutes. However, it also means heaping all their girls’ bedding (mattress pad, pillows, blankets) onto our bed.

Instead of converting the dinette back to a table, we usually had our oldest eat at the tiny “desk” by the foot of our bed and our youngest eat on a small camp table on the floor.

However, as you can see from the pictures, the small desk is too small, so we had to put a cutting board on-top to make it large enough to hold a plate. And the “small” camp table also takes up the entire hallway. Not only that, but it took up space, along with the dinette cushions and more, in our large “closet” (aka the shower).

And of-course, we try whenever the weather is nice to eat outside anyways.

When we needed table space for other reasons, such as the girls making crafts, we generally improvised anyways rather than converting the dinette table.

Reason 2: The girls need their own beds

For this last trip, the dinette bed worked. However, the girls are growing taller quickly. We had them sleep head-to-toe to give them each their own space, but already they would sometimes kick each other by accident in the night.

Our oldest really enjoys having her own space at home. When she wakes up in the morning, she can find a nook to read quietly to herself without waking anyone else up. Sharing the dinette, when one girl wakes up they generally both wake up.

Reason 3: The storage in the dinette isn’t very accessible

The dinette has two main storage areas on each side. One side is easily accessible, and we use it for shoe storage. The other side involves pulling the cushions up to get in. This would be pretty quick and easy, except them we’ve added a bed rail and mattress topper which all need to be shoved aside to get in.

We found that one of our biggest frustrations in the 5-months was having things we use every day stored in inaccessible places. Most of our food was either under the dinette, under the main bed, or in the van.

After we remove the dinette, we intend to put a large drawer where the under-dinette storage cubbies once were.

Reason 4: The hallway is tight

With the dinette in place, the hallway is quite narrow. If Sarah and I want to pass each other, we need to each stand sideways and squeeze ourselves against the opposite side furniture. And when there are children playing in the hallway, then there’s just no way around!

Our bunk bed will be able to be 8″ narrower than the current dinette, which should make the hallway feel quite a bit roomier.

Removing the dinette was quite easy and only took about an hour. With a few dozen screws removed I was able to remove the dinette, while leaving the majority of it assembled. Putting it back in in the future will be quite easy.

The only slightly tricky bit was some wires (both 12v and 110v) had to be disconnected before the pieces could be completely removed from the trailer.

For now the dinette will live in our basement, so we can put it back in if/when we sell the trailer in the future.

In our living room, the girls thought the dinette pieces made an excellent fort!

You can read part II, III and IV of this series of posts here:

1 Comment on “Building a bunk bed for our Airstream Sport 22FB: Part I (removing the dinette)”