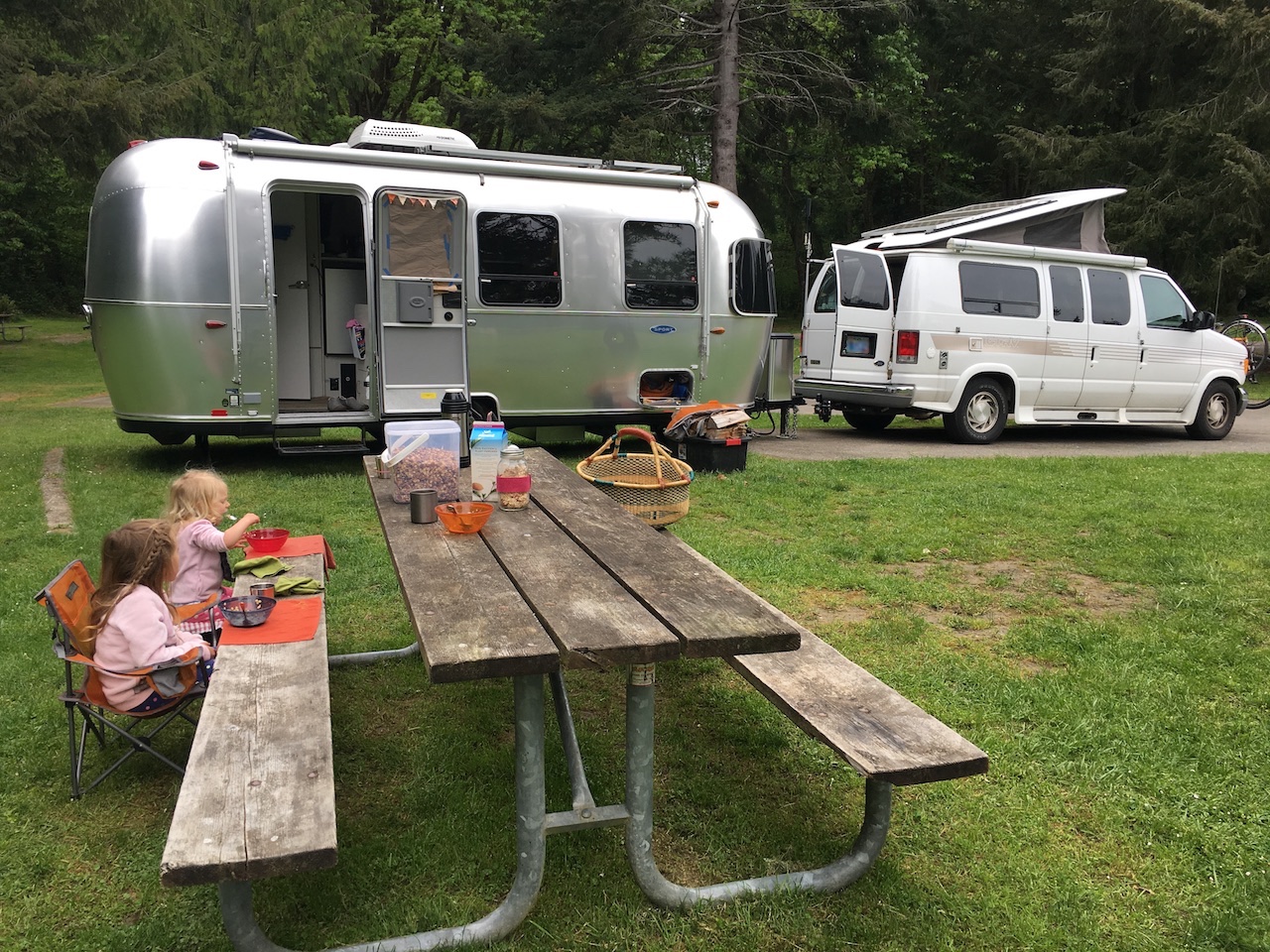 We’ve started our next “test trip” with the girls in our new camping rig, “Wobbles” the Airstream and “Dimes” the van (which has recently been given this name by our 4-year-old).  We’re exploring the Olympic Peninsula and Olympic National park for 2+ weeks.  Since our girls don’t make driving long distances particularly easy or pleasant, we’re trying to break up the drives as much as possible.  Therefore, we reserved the last available campsite at Dosewallips State Park, part way up the peninsula,  in order break up our drive up to the North-Eastern corner of the peninsula.

We got a late start to our trip because we needed to stick around at home for the morning on Saturday to clean our AirBnB cottage, as a guest was just checking out and we hadn’t scheduled someone else to clean.  Also, I was concerned about the weight distribution between the Airstream and the van, as we had packed for this trip as if it was the “big one” to see how well our stuff fit. I drove to a weigh-station around noon, and initially the rear axle of the van weighed in as over capacity, so I had to adjust our weight-distributing trailer hitch to shift the weight off the rear axle and then re-weigh.  By the time I got home and we finished packing the last few items, it was 2:00– I bit of a late start with a 3 hour drive ahead of us (which takes much much longer with screaming little ones and frequent bathroom stops).

We didn’t get in to Dosewallips State Park until about 6:30, which normally would have been time to start getting the girls ready for bed.  We cooked dinner at a rest stop on the way up as we knew it would be too late for dinner when we arrived.  We had reserved a site that claimed it was big enough for a “large RV”… however, when we pulled up to our supposed site (the only one that didn’t already have campers in it), we saw instead a short paved driveway that was at a rather steep incline, only about long enough to fit the van, and not the trailer.  The campsites were located in a large open field, so there was no divider or privacy between the sites, and the neighboring campers had set their tents down in a spot that was just a few feet from our site’s driveway.  They were a large, noisy group, complete with small off-leash yippee dogs (which Sarah is not exactly a fan of).

Fortunately, since it was grass behind the driveway of our site, we were able to back the trailer up onto the field (just barely, as our trailer has very little ground clearance).  The girls were excited to be at a new place, and the campground was full of loud children who were up late playing, so bedtime was a long, frustrating ordeal, and they ended up falling asleep way past their bedtime.

I was beginning to wish I had only booked one night at the site instead of two.

The next morning was beautiful and sunny.  We all went for a morning run around the campground using the new double-wide stroller/bike trailer that we purchased off Craigslist last week for the trip.  Then, after breakfast, I realized something great– it was Sunday morning.  The crowds at the campground were likely just there for the weekend and would be heading home before the 11am checkout time.  I pulled up the campground reservation website on my phone just to confirm and saw that our entire loop of the campground was going to be empty, aside from us!

To our  delight, one by one all of the other campers in our loop packed up and headed off until it was just us remaining.  Suddenly, what previously seemed like a lousy campsite turned into an amazing campsite.

Dosewallips isn’t a huge park, and there isn’t particularly a lot of attractions in the area (at-least not if you’re not into clamming).  It’s more of a stop along the way up the Olympic Peninsula.

Something to note was that there was elk poop everywhere in the campground!  Exciting as this may seem, we didn’t actually get to see any, we were just lucky enough to see clear signs that they enjoyed frequent visits to the park too.  It made for quite the obstacle course for the girls on their bikes!

Dosewallips River runs through the campground, and the girls enjoyed digging in the muddy sand along its edge.  The river runs into the Hood Canal (part of Puget Sound) .. although when we tried to go look at the canal the girls were melting down from their less than stellar night of sleep, so we didn’t really get to explore it.

We decided to just take it easy and let the girls ride their bikes around the circular road by our site– there would (hopefully) be other days (at other campgrounds) for more serious exploring.

From here we’re headed up to the north-eastern point of the Peninsula at Fort Worden State Park.