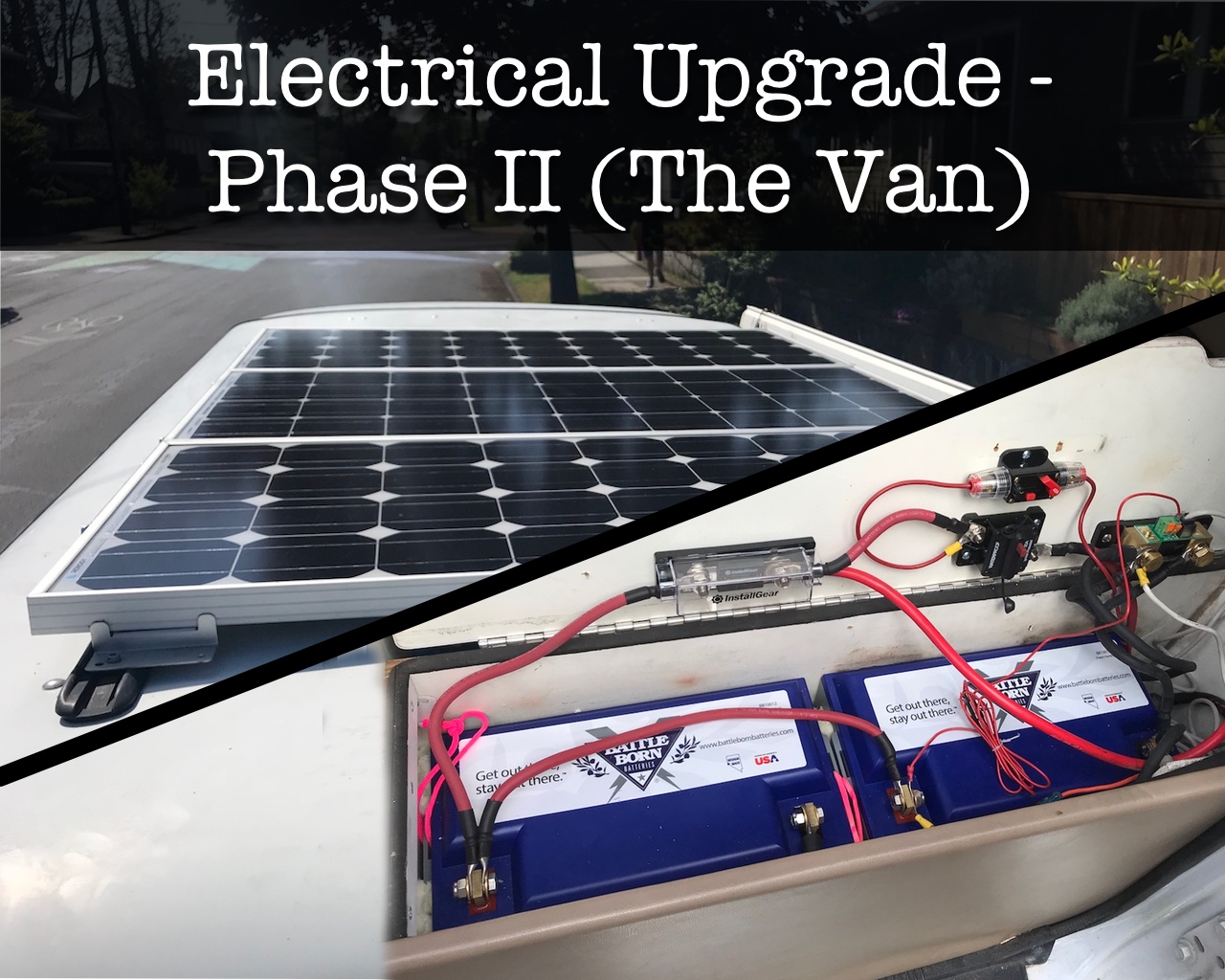 Our GTRV camper van came fresh from Craigslist with two open cell lead acid deep cycle house batteries installed in a sealed battery box in the rear of the van (and vented to the outside).  These two batteries provided roughly 100 amp-hours of capacity.  In this phase of the electrical system upgrades, we’re going to replace these two batteries with lithium batteries, which will double the capacity to 200 amp-hours and reduce the weight from about 100 pounds to 60 pounds (that might not sound like much, but since we’re just about at the van’s weight capacity when we are towing Wobbles (the Airstream), every pound is important to us.  We’ll also be adding a battery monitor (the same one we installed in the Airstream).

For this phase of the project, I used the same BattleBorn brand Lithium batteries that I had installed in the Airstream in Phase I.  I also used the same Victron BMV-712 battery monitor.

For solar panels, I used the Renogy brand 100 watt solar panels.  They are monocrystalline panels, which used to be more efficient than the often cheaper polycrystalline panels– although from what I gather the two types of panels are almost equivalent now in terms of efficiency.  I mostly went with Renogy because I’ve purchased a few of their products in the past and they’ve always worked great.

However, what I didn’t realize until I watched this video is just how sensitive solar panels are to partial shading.  Even a small shadow on the corner of one panel can cause that panel to produce no output.  And when the panels are in series, one panel producing no output causes the entire array to produce no output.  When the panels are in parallel, a single panel being shaded only causes that one panel to stop producing output– the other panels in the array, assuming they aren’t also shaded, can continue to produce.

For this reason, I’m going to switch from series to parallel on the solar panels on the van.

I bought the following new parts for this phase:

Additionally, the following components I had already installed on the van previously:

Adding up the total of the new gear and what was already installed, the van electrical system upgrades total $2808.89.

Previously, I had installed the two 100 watt panels onto the existing track on the roof of the van, using the 4 Renogy solar panel mounting brackets on each panel, with the brackets bolted into the track.  However, with separate mounting brackets on each panel, there was a gap of about 4″ between each panel for the brackets.  This was fine with 2 panels, but in order to fit 3 panels no the roof track, I needed to get the panels to sit right next to each other with no gaps.

I accomplished this by buying two pieces of flat 1.25″ x 4′ x 1/8″ aluminum.  I laid all 3 panels upside down next to each other, clamped the aluminum flats to the sides, drilled holes through the aluminum flats and the aluminum channels on the panels, and then bolted them together.  I left the existing mounting brackets on the two outside panels, but put no brackets on the middle panel.  When done, I essentially had one large rigid solar panel unit, with 2 mounting brackets accessible at each end, and 4 more in the middle that were not accessible, but would sit flat on the van roof track for support.  I bolted the exposed 4 brackets to the roof track.

I installed the two BattleBorn lithium batteries in the existing battery compartment of the camper van, where the old lead acid batteries used to sit.  The batteries were a tight squeeze, but since they’re designed to be drop-in replacements for lead acid batteries the dimensions were roughly the same as the old batteries.  I wired the two batteries in parallel.  On the positive side of the circuit, I added a 250amp fuse.  I ran the negative side of the circuit through the shunt resistor that is part of the Victron BMV-712 battery monitor system.  There’s also an 80-amp breaker that goes to the winch connector that connects to the Airstream, and a 25-amp breaker that connects to the 7-way trailer connector (I keep this breaker off when towing the Airstream, since it charges through the winch connector now and no longer through the smaller-gauge 7-way connector).

I had trouble finding a spot to install the screen of the voltage monitor, but was able to find a spot right next to the ceiling squished amongst the speaker, thermostat and thermometer.

With the new electrical components installed in the van, we can park the van somewhere sunny even if our Airstream is parked in the shade.  The van batteries can charge up during the day, and then we can bring it back to camp and plug it into the Airstream to transfer the power back to the camper.  Or, if both the van and Airstream are parked together in the sun, we can leave the two connected and enjoy 650 watts of solar power.  Once we’ve gotten some use out of the system I’ll write about the results.