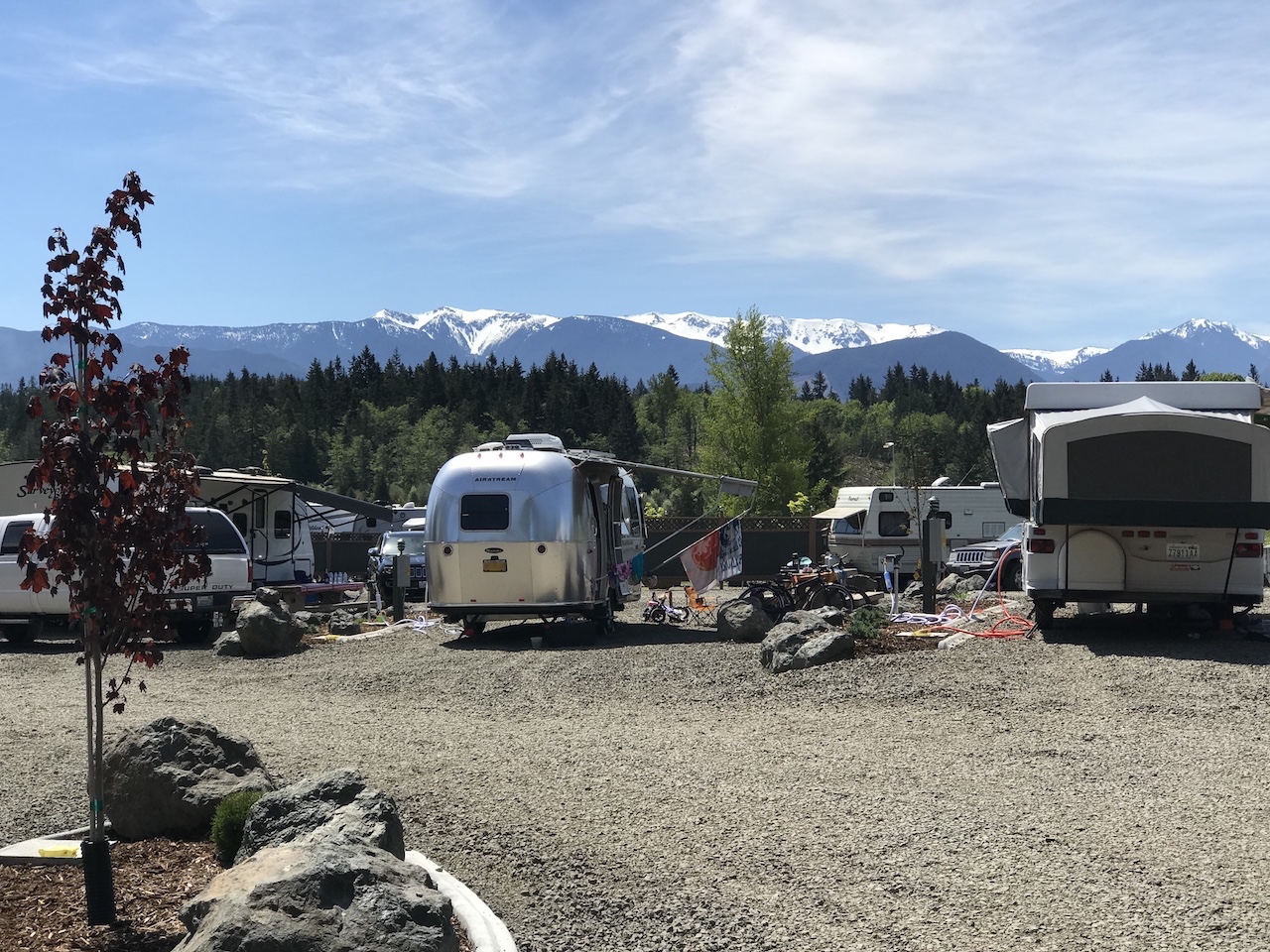 I know!  We stayed at a KOA.  I can only half believe I am admitting this to the public.  Don’t get me wrong, KOA’s are not bad places to stay, however, I don’t really consider them “camping” spots either.  They are full of luxuries that do not go under my definition of camping.  At a KOA that Justin and I once stayed at we were forced to listen to a horrific Elvis impersonator painfully sing who-knows-what being blasted from loud speakers throughout the park.  It was enough to make someone’s ears bleed.  As you can guess, I was a bit skeptical having this on our list of stops but we were due for a clean load of laundry.  Truth be told, it was a great stay!

The first day we went to Hurricane Ridge.  It was supposed to be an hour drive one way, but it felt like a 3 hour drive due to a screaming-her-head-off 2-year-old and lots of construction.  Any-who, just as we pulled into the visitor center parking lot our little one fell asleep. We drove in circles around the parking lot for another 7 or so minutes just to seal the deal and make sure our little screamer was sound asleep! Ha! So, sadly, she missed it but the rest of us thoroughly enjoyed it!  There was snow and lots of it! The banks by the road were easily 5-6 ft high and on the snow packed hills that we explored it was at least 4 ft in places.  The viewpoint gave us a 270° view of the snow peaked Olympic Mountain Range.  It was spectacular!

On the drive back down the mountain we saw lots of cars pulled off the side of a non-friendly pull-off road and wondered what was going on.  We soon were pulled over and gawking with the rest of the tourists.  There, just by the side of the road, was a beautiful Mama black bear with her two sweet fuzzy little bear cubs grazing!  Oh my goodness, the cuteness!!  It was amazing and a bit scary.  Unlike some of the other folks, we stayed a safe distance from the Mama and her bears.  At one point the Mama picked up her pace and ran across the street.  That was enough to make my heart pound and I immediately took my sweet 4-year-old back to the safety of our van.  The bear would have had many other closer more convenient gawkers to take out before she got to us but I wasn’t chancing it.  It was also so special seeing this sweet family of bears because it was so close to Mother’s Day.  I couldn’t help thinking what a proud Mama she must have been to have such sweet little ones.

A lazy day at KOA

The second day at the KOA we had planned to take the ferry on foot (and potentially with bikes) over to Victoria.  However, we learned that since it was off-season there was only one ferry throughout the day which would pick us up nearby in Port Angeles at around 8am and wouldn’t drop us off again until 5:30pm.  We thought this sounded like too long of a day to keep stress to a minimum.  Based on this ferry schedule coupled with the high price of the ferry we decided to take advantage of the luxuries that KOA provides instead (which we were paying for anyways in the higher camping prices). It was a great choice! It was a leisurely day of swimming in the pool, playing on the playground, the girls helping the staff water plants, me doing laundry, crafting and going on a hay ride (which was terrifying for our 2 year old for some reason).  Just what we needed!  Also, the staff were so very nice.  Sorry for bashing you KOA!

I think my attitude changed about KOA for a couple of reasons.  One being, we were sleeping in our camper which meant we could control noise and light fairly well.  We have kids now and KOA’s are very kid centered.  When Justin and I had previously stayed at the KOA we didn’t have kids yet.  It was also a nice treat to do laundry and have the pool on a hot day.

Last but absolutely not least is the Game Farm visit.  A KOA staff member had highly recommended us going to a game farm not far from the campground.  This game farm used to house most of the animals for Walt Disney productions.  Until they became so digital that is.  The farm was created to house orphaned or abandoned animals and now mostly consists of the animals that have been born here from ancestral orphans.  At the gate you pay your entry fee and are given the opportunity to buy loaves of bread to feed to the animals.  You drive through the game farm with windows down but bodies inside observing and feeding the animals.  Some of the most amazing we fed were the llamas, elk and buffalo.

The llamas were hilarious and so very bold!  They would stick their funny looking heads right in the car and gobble up as much bread as we were willing to give them.  When we were done feeding them, they clearly did not like our decision.  Those stubborn llamas would stand stark still and not move out of our way.  Even when we moved the vehicle forward they simply and ever so stiffly would tilt their long necks away to avoid getting bonked by our mirrors.  I wonder how many non-patient drivers have run over these awkward animals.

In the buffalo and elk enclosure the rule was to keep your vehicle moving at all times as they can do major damage.  The elk were certainly intimidating to feed due to their size and height.  I never realized how tall they are!  When a big buck leaned in for a piece of bread I nearly threw it at him!  But most exciting of all was feeding the buffalo. Their faces are SO giant, their horns so big, their tongues so long, their bodies so strong…we all became panicked as one ran at our open window to get his share of our bread.  All of a sudden we all panicked and I had our 4-year-old screaming, “Buffalo!!!” while clamoring over my lap to get away from it, my 2-year-old saying, “I don’t want to do it again!,” me urging Justin to keep the vehicle moving as I was dropping my handfuls of bread out of haste and Justin yelling for more bread as he had a needy buffalo on his side too!  Oh my word! Their tongues are like arms! Haha!  This was the highlight of the trip for me for sure!