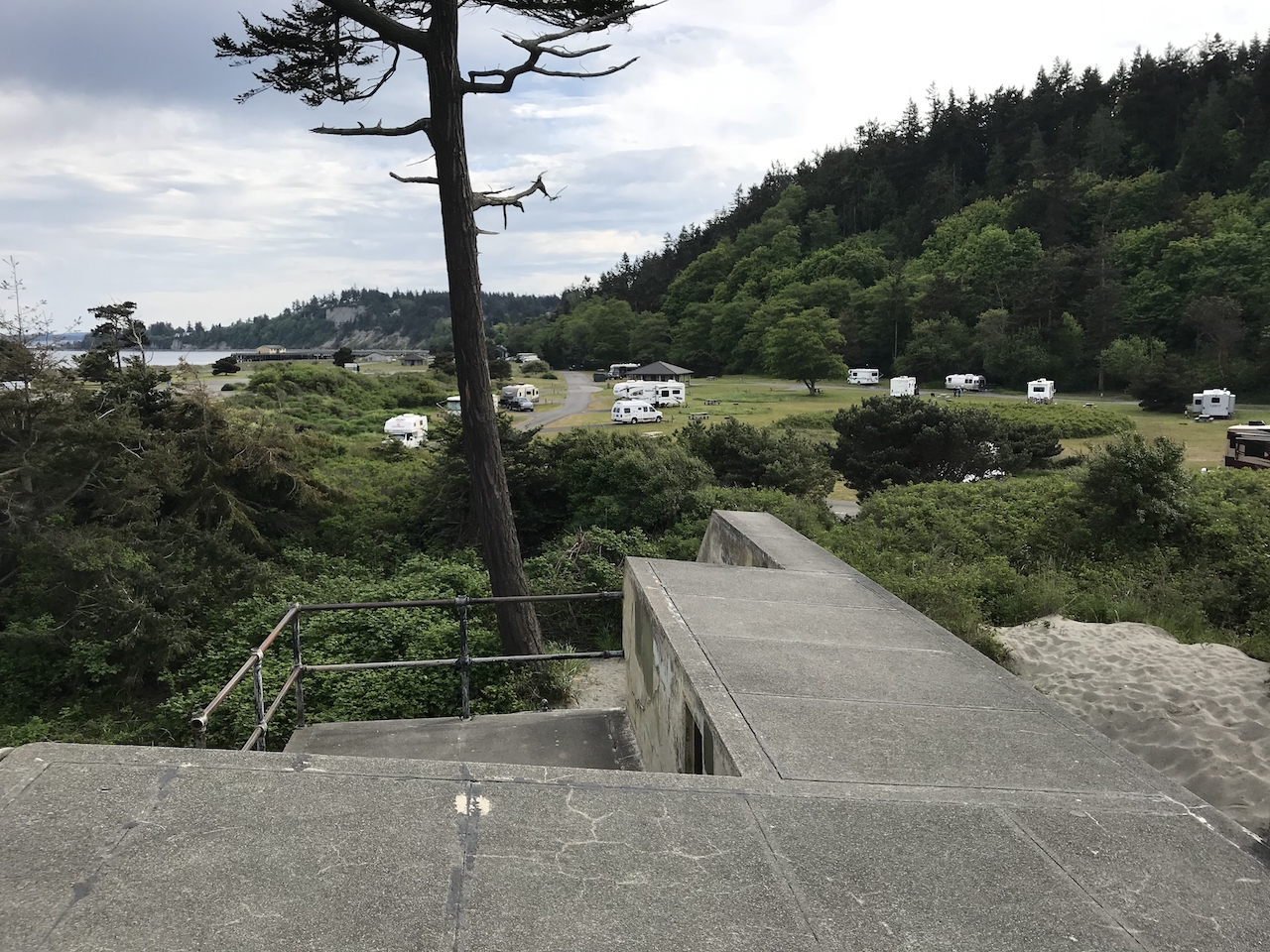 For the second stop on our 2 week Olympic Peninsula trip we drove 1 hour from Dosewallips State Park up to Fort Worden State Park in Port Townsend.  Since it was a Monday, we didn’t make reservations and assumed we’d have no problem finding a site.  As it turned out when we arrived there were only 2 sites available for the 4-day stretch that we wanted to stay (at-least at the more popular beach campground), so we considered ourselves lucky to have snagged one!  We loved Fort Worden and the surrounding Port Townsend– there was so much to explore that we couldn’t see it all in our 4 day visit.

We really enjoyed staying at Fort Worden. The beach campground is the type of campground that we used to avoid like the plague– basically an open field with RV style campsites spaced about every 40 feet with no trees for privacy. However, now that we have an RV we have a different perspective.

Despite the campground being nearly full, it was quite quiet (especially compared to our weekend stay at Dosewallips State Park). I’m not sure if this was more attributed to the fact that it was a weekday, or that there were only RVs and most people stayed inside (we could see the glowing television screens through their windows at night). In fact, being some of the only families with kids in the campground, we may have been the loudest.

A perk was that our site was near a paved loop for RV turnarounds but it acted as a great bike race course for the girls! It was far enough away from our site that it gave the girls a sense of freedom and close enough where we could still see them. It’s the little things. 🙂

Just across the street from our site was the Puget Sound! The girls had so much fun exploring driftwood forts, collecting rocks, seaweed air pockets, crabs, shells and sea glass. Our 2-year-old collected the corpses of tiny crabs throughout our trip. “Aw, what precious little sweet things” she would say. Should I have told her they were dead?? They now have a home in her traveling treasure box! We saw lots of curious seals in the water, river otters, crabs beneath the tide and even a jellyfish! The shore was brimming with life as was the campground. There were so many deer!!

We’ve explored a number of different forts in Oregon and Washington recently and they do all start to look the same after visiting 2 or 3. However, Fort Worden was definitely the coolest we’ve visited. It’s a huge, beautiful property, half manicured with all the original buildings (which felt like a college campus) and half wooded with a dozen or so concrete forts scattered around the bluffs. It was incredible how vast this place was! We would be walking through the dense forest of the bluff passing deer and other wildlife when out of nowhere up popped a city of concrete forts and history! The secrecy and scheming that went on there was exciting to think about.

Usually we go to forts and guess what little nooks, metalwork, tubing and tracks were used for but there is little signage giving hints to their purpose. This time before bringing the girls to the fort I did some research and found out some fun facts to spice up the tour. It was fun for my curiosity and hopefully made it more meaningful for the girls. That being said, Fort Warden actually did have pretty great informational signs. Hurray!

Another really neat thing about Fort Warden is that they have started and are continuing to use the old buildings for things like yoga, dance and wood-crafting studios, and a pub, plus they rented out a lot of the houses to vacationers. Brilliant! This idea came to them after realizing how much it would cost to remove all that concrete! Haha. Good choice.

While exploring, the girls especially liked the echoey tunnel we found that went under one of the roads. It was used to get from one of the hidden barracks to the fort. How incredible!

.Since the girls little legs don’t last very long walking, we appreciated all the paved stroller friendly roads between the forts.

We really love staying at campgrounds that are within biking distance to a town. During our 4 days at Fort Worden State Park, we didn’t need to drive our van once as we could bike or walk everywhere we wanted to go.

The main part of Port Townsend was only several miles of a bike ride from the campground. On the way into town we took the long way around to try avoiding some of the big hills and it was lovely. Challenging but definitely doable. Since we recently picked up a 2-kid bike trailer, we were able to tow the girls into town.

Town was oh so sweetly split into downtown and uptown. Quite literally what their titles state. Downtown was at the bottom of a large hill snuggled down by the shoreline. Breezy and quaint. Down by the water we discovered a fun play ship out on the boardwalk by a wooden boat making place. On the edge of downtown we found a beautiful stone fountain speckled with pink and white rhododendron blossoms. Just stunning! Naturally the girls scooped one out for each of us to wear. Just behind the fountain tucked into the hillside was a never-ending wide staircase to, of course, uptown!

Uptown is where we found a nice playground, a community swimming pool, a good co-op, and an amazing little bakery. In my opinion, a city is nothing without a good bakery!

On the bike ride home we decided we would take the route as the crow flies. And…let’s just say the hill was much much bigger this way. I’m proud to say we only took one break for a drink then continued upward feeling the burn. We did end up getting back to the campsite a lot quicker via giant hill and got some needed exercise too!

It was really a beautiful place to visit!