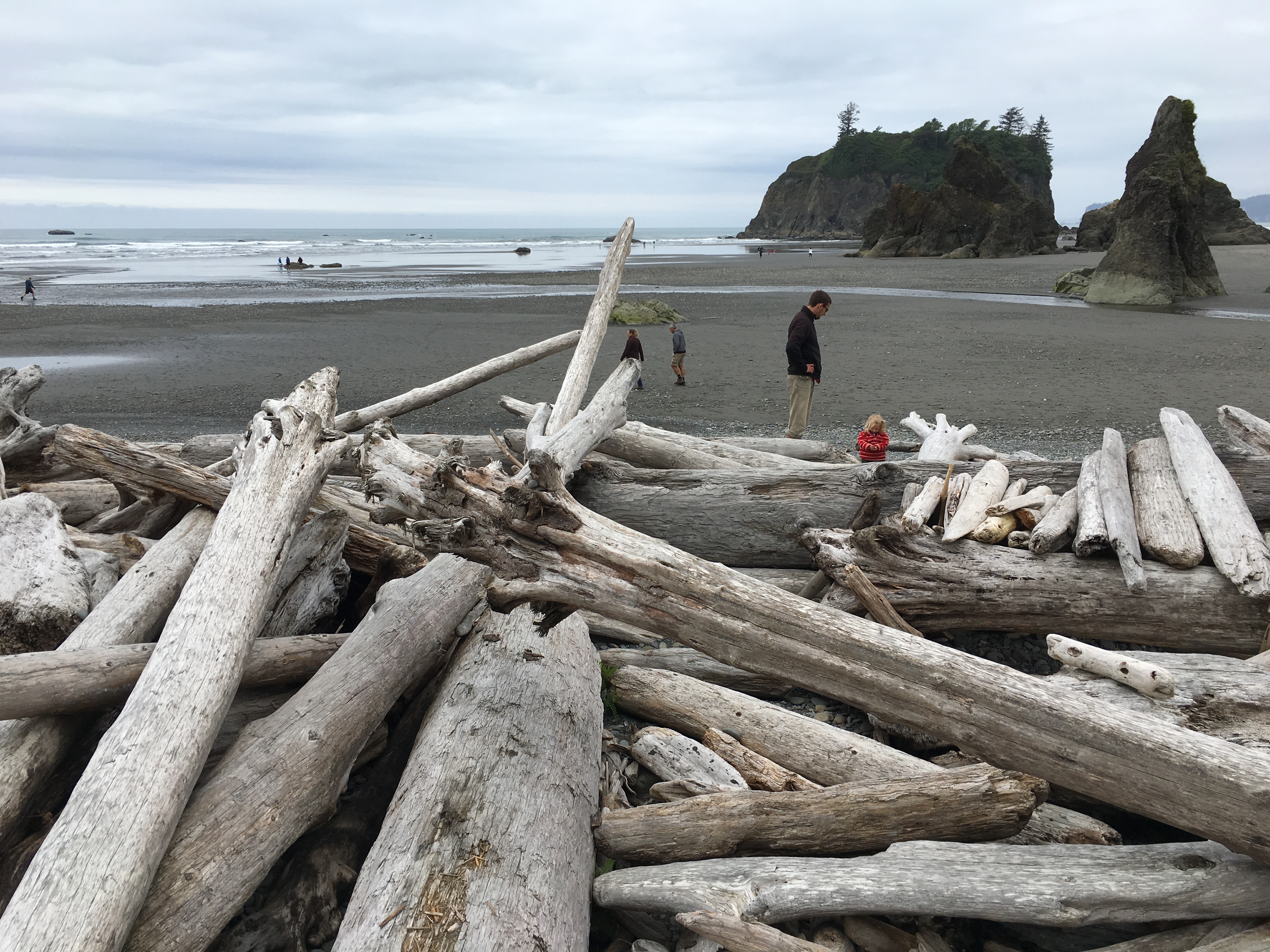 A campground right on the beach!  We arrived a little after noon on a Friday and weren’t sure what we would find left as far as scenic sites.  As you may have guessed, all the beach view sites were taken.  Something we noticed though was that the beach sites were pretty tiny.  Of course there were a couple that had a little more space but as a whole you paid a price for your view.  Not far away from the beach we found a lovely site with a hidden gem!

There was enough room for Wobbles and a sideways Dimes in the site.  After setting up camp we realized the campsite was SO much more amazing that we had hoped for!  Tucked in the side of the site was a little clearing in the woods (that could be used for a tent).  The girls and I walked in pretending we were in a magical forest and what did we turn to see??  The most magnificent tree gnome guarding the entrance!  It was a giant burl that was shaped exactly like an old tree gnome, drippy sap nose and all!!  It was incredible!  I was taken back myself but to see the girls in utter awe was so precious.  Our 4 year old breathlessly exhaled, “It really IS magical!.”  In agreeable hysterical giggles came from our 2 year old.  As the girls showed us, it was a perfect nook for labyrinth making and fairy dancing.

Late into the evening a group of campers who may or may not had too much to drink clambered through the woods expecting to find their campsite but happened upon our wise tree gnome instead.  They all stopped dead in their tracks and Ooed and Ahhed claiming that we had the most magical site they had ever seen.  I had to agree, it was pretty awesome!

The beach was a short walk from our site and to our littlest one’s delight chalk full of crap skulls (don’t ask).  There were also plenty of “angel wings” (razor clam shells that were still attached) to discover.  We also found a river of slime!  That’s the only way to describe it.  It was an extremely shallow steam inundated with algae.  Fun to poke at!  We heard that there was also a “tree of life” somewhere on the beach which basically lost all the earth from under it therefore now straddles two pieces of land held suspended by its roots.  The girls were not up for the hunt so we skipped it.  Eh, we’ve got to leave something for next time.

There were lots of beaches within biking distance from the campground.  However, sadly, the road was really dangerous therefore we drove.  Most of the beaches were nondescript given numerical titles, “beach one”, “beach two”… All but one beach that is.  Ruby Beach was named and we found that it was fantastic (therefore worth a name)!

After climbing over log upon sea washed log the beach seemed endless.  Unfortunately I wore sneakers, not great footwear for the beach so Justin ended up carrying me over the mountain stream that separated one side of the beach from the other (such a gentleman). We happened to go during low tide which gave us the perfect opportunity for tide pool scouting.  The tide pools were outstanding!!  None of us had ever seen one in a natural environment before.

Surrounding a large rock were hundreds of green sea anemones!!  The ones that were under water were waving their sticky little tentacles but there were others above water level that were packed with sand.  Clearly this is a daily thing for them, but it looked sad.  Justin splashed water on some above water and when he did they pulsed open, then closed again.  Really neat to see.  We also saw a handful of yellow and red sea stars!  The rock itself seemed to be chattering or crackling at us.  Almost as if we just poured some milk on a bowl of Rice Krispies.  Upon closer look, the rock was alive!!  Barnacles!  Justin caught one of them moving, like a bird’s beak in a carved out rock.  The clicking sound was their little “beaks” chomping.  Creepy looking!  Though, we didn’t realize how creepy they really were until we got home and watched this video:

Oh my heavens!!  That is stinking creepy!!  Thank goodness we didn’t see that video before we found the tide pool.