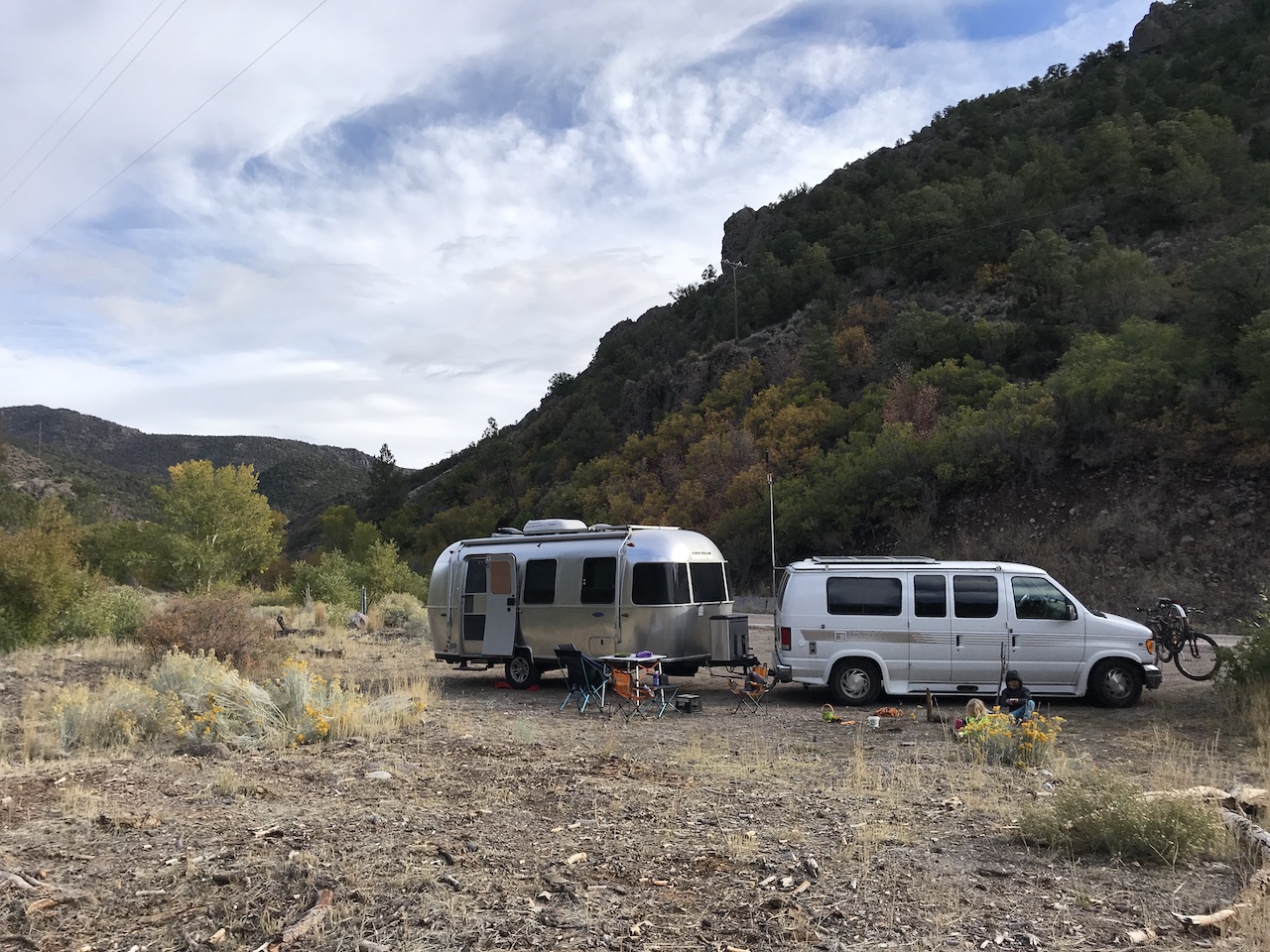 After Salt Lake City, we hit the road to head toward Zion National Park. On the way we ended up finding a great spot to boon-dock for a night and enjoyed our first truly quiet night of the trip.

The drive from Salt Lake City to Zion was going to be 5-6 hours (despite the 80 mph speed limits in Utah, we prefer to go about 60 in our pokey van). To split the drive up, we planned on finding a spot to camp for one night somewhere in between. My first thought was the Beaver Utah KOA, but we’ve stayed the majority of our nights so far on this trip at KOAs (7 out of 11 nights), and they’re fairly expensive ($50+ night) and not always the most pleasant environments. Using the Allstays Camp & RV iPhone app (an app I definitely recommend, as it shows the locations of all sorts of campgrounds and it works without cell service) I found a National Forest campground, Little Cottonwood Campground, in the Fishlake National Forest just outside of Beaver, UT. We punched the coordinates into Google Maps and began the 3.5 hour drive to the campground.

When we finally arrived at Little Cottonwood Campground, however, we were disappointed to be greeted by a locked gate across the road. I checked the Allstays app again and realized I had overlooked that it said the campground was only open through September (it now being October 10th). We had just enough space to turn around while towing our Airstream, and headed back toward Beaver to stay at either the KOA or one of the other campgrounds we passed on our way in.

On our way out of the National Forest we noticed a few other RVs camped along the side of the road, and then saw a pull-off up ahead that was vacant. We pulled in and decided it would be a lovely place to camp.

Well, lovely except for the smell of rotting flesh. As we pulled in Sarah noticed a deer leg on the ground. Holding her breath, she slapped it into the bushes using a stick. However, it wasn’t until we had set up camp that we noticed that the rest of the deer (or at-least what was left of the rest of the deer) was behind a bush on the other side of the camp. When the breeze blew toward the West all was good– but when the air moved toward the East, our camp was smelling not so fresh. There was also a high concentration of flies– likely because of the carcass.  Oh well, we could deal with those things for one night– it was otherwise a lovely place to camp.

A gunshot ringing out reminded us that it was hunting season in these parts, so we took a neon-yellow vest from our roadside emergency kit and used it to make our youngest a little more visible!

So far on this trip we’ve been in fairly populated areas– even the first night of the trip when we were boon-docking on BLM land outside of The Painted Hills we were still in the company of many other RVers. Here, however, we were all by ourselves, and it was a nice change. A few cars would go past on the road each hour, and cows would periodically roam by, but otherwise we were alone.

The girls enjoyed being in nature again– building fairy gardens is one of their favorite activities when we’re camping, but the paved KOA driveways hadn’t lent themselves to good fairy garden building. As soon as we pulled into this spot, the girls were at work digging holes, propping up sticks, foraging for bark and tying things together to make homes for their fairies.

Sarah and I took advantage of the fact that we didn’t have any neighbors to bother by getting some good daytime guitar practice in … and by good, I mean that I tried belting out some songs that were not in my vocal range, something I wouldn’t have done at a campground out of respect for the eardrums of fellow campers!

While Sarah was putting our oldest to sleep, our younger daughter (who was staying up later since she took a nap on the drive) and I made a campfire. Later, after Sarah emerged from the camper, our youngest said: “Mama, what are those sparkles in the sky?” She had never seen real stars before! In our non-nomatic life we live in a city so we don’t usually have an unobstructed view of the sky without light pollution… that, and her bedtime is usually before it’s dark out, at-least in the warmer months. You could see her little brain working hard trying to connect her concept of stars and planets with the little sparkling dots she was seeing in the sky.

After the girls were asleep, Sarah and I enjoyed the solitude while keeping warm around the campfire– our first real campfire of the trip (aside from a quick daytime marshmellow roasting fire we had on the 2nd night of the trip).

For the next 3 weeks or so we’ll be exploring southern Utah’s National Parks and monuments. No doubt we’ll be spending a lot of time in busy campgrounds, but I do hope we’re able to find the occasional spot away from the crowds to enjoy more of this tranquility.