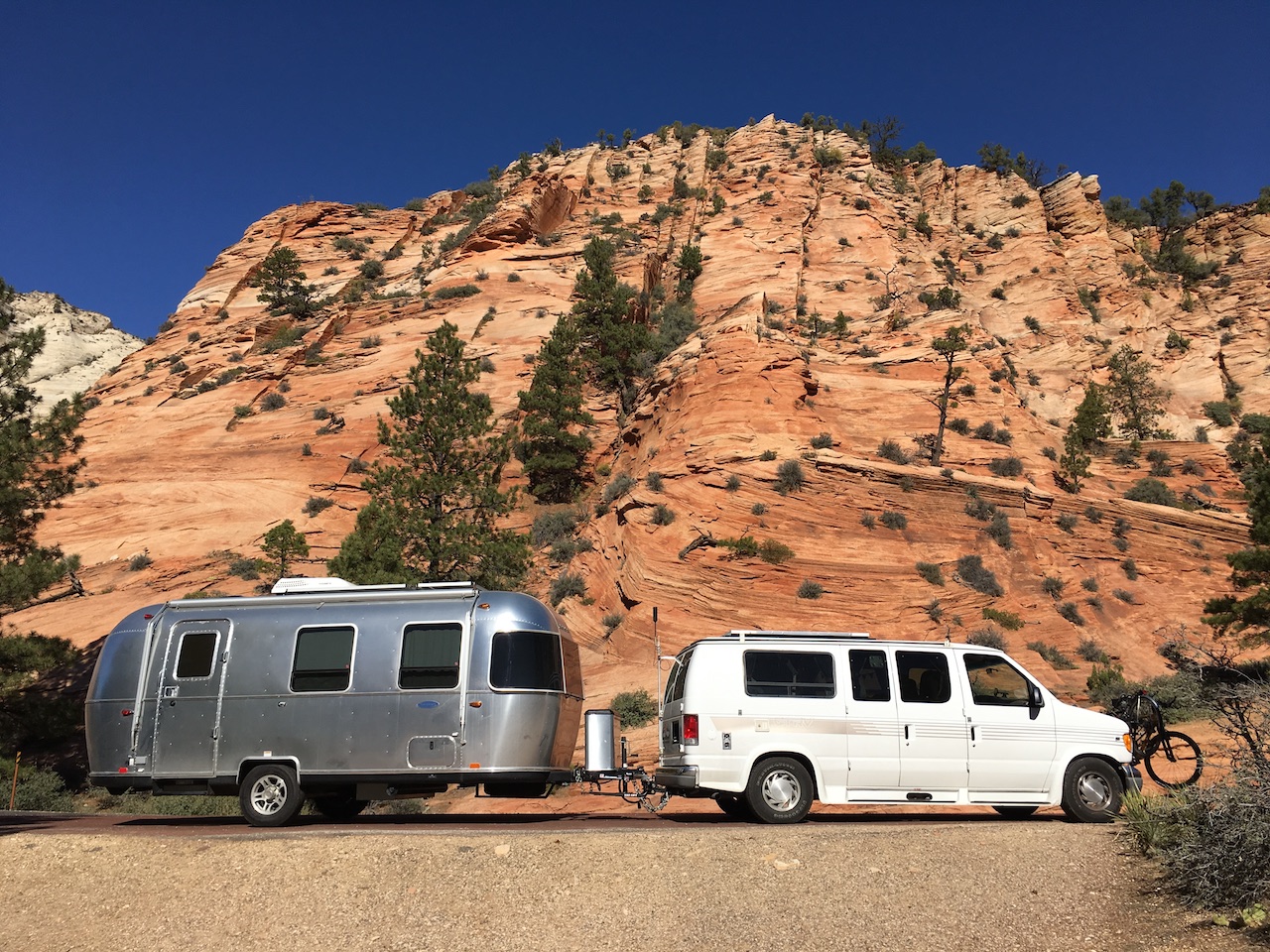 The road trip to Zion from our last campsite was smooth sailing with some fun pit stops.  Once at Zion we explored trails and the local scene for 3 day and 2 nights.  What a spectacular place!

Leaving in the morning from our off-the-grid campsite was easy peasy as we didn’t bother unhooking Wobbles (the Airstream) the night before.  We were almost to Zion when we saw a quaint little western themed “town” and decided to see what it had to offer.

Here, we got to feed lamas, sheep, ponies and a donkey.  It was a total tourist trap that we happily fell into.  The land was covered in prickly pear cactus which were bearing large, very juicy, pink fruit.  Inside the parlor we sat next to a ghost playing piano while we shared a bowl of prickly pear ice cream and sat on horse saddles, tractor seats and rugged wooden stools.

Luckily, we experienced rain only while driving on our first day.  Though, upon arriving at Zion the rain had caused flash floods which led to some closed trails.  Throughout our stay we witnessed some “rivers” of water that were here on our first day yet not on our 2nd after the floods had subsided.  Pretty incredible change!

South Campground where we stayed was a great location!  It had a great tree for the girls to monkey on and had those beautiful white, tan and red rocks as a backdrop.  It didn’t feel crowded, was within a very short bike ride (with bike lanes) out of the park to the nearest town, near a shuttle stop and practically on a biking/walking path that meanders along the Virgin River, or what we called the “Cocoa River” since it looked like cold cocoa flowing.

On our arrival day we spent our time checking out the Visiter Center and letting the girls play around the campground.  We also started the Jr Ranger Workbook for Zion.  We went on the short Archeology Trail to the site where an ancient Pueblo tribe had built food storage structures.  Sadly, we just missed a tarantula that passing hikers saw on the trail.  However, the trail came with a great view.

While I was making dinner, Justin took the girls biking on the Pa’rus trail (a paved trail that starts at the Visitor Center and goes right by South Campground, which is the only trail in the park that allows bikes.)

We went on 2 beautiful yet very crowded trails: The Lower Emerald Pool and Weeping Rock.  On these hikes we saw a mama and baby mule deer, which have amazingly large ears, a rock squirrel and a grub which after talking to a ranger we now know was a Scarab Beetle larvae!  The larvae was the strangest sight with a very thick, juicy, white transparent body with a black head and tiny front legs.

The falls were really just a trickle but it was beautiful to see while standing underneath carved out sandstone and seeing the light reflect off the water dripping from above.  The red rock is absolutely incredible and semi-irresistible to use as face paint; at least according to our 5 year old.

The girls each earned dimes and walked on their own two feet for both of the hikes with minimal complaining. 🙂 After much compromise, our 3 year old’s stuffed bunny, Bun Bun came on our adventures for the day riding mostly on her back.

Both the trails we hiked and the shuttles we rode were very crowded!  I’m sure it was probably because we chose the easy and beautiful hikes … but that part was a bit stressful.  It takes away from the journey of a walk or the beauty of the destination when there are 40 other people pointing their iPhones at the same thing.  It was still amazing but something to note.

While I was putting our youngest to bed, Justin and our 5-year old had a close-up encounter with a deer.  The deer was just munching away at it’s grass and could care less that our 5 year old was running laps 10 feet away!

We started our 3rd day with a family run, something that we’d love to be a more regular event (not because I love running, I don’t, but because it feels good to have some allotted time to get some exercise in).

After breakfast the girls and Justin biked while I ran along side to go to the Human History Museum where there was a ranger talk and an informational video about the park.  It was also here that the girls and I read book after book in their gift shop while Justin biked back to the campsite to retrieve the Jr Ranger Workbook our oldest was working on.  I also purchased a fanny pack!  Who knew I should have kept my Mini-Mouse fanny pack from when I was five?!  That’s right people…they’re back and so darn practical!

After completing the Jr Ranger Workbook, our oldest was very timidly sworn into being a Zion Jr Ranger!  And, because our youngest was too young for the program but helped Kira out, she was awarded a Jr Ranger In Training sticker (that I will make into a pin).  So nice!

For our last adventure of the day we wanted to be sure to take advantage of the bike friendly ride out of the park and into Springdale, the town just outside the park.  We were hoping to pick up a couple grocery items such as cereal but found the prices too outrageous to swallow.  We left the store with apples and carrots, which were within a normal price range.

We spied a brew pub in town and thought that might be a good place to eat dinner on the beautiful 72* sunny day.  Upon arrival we found more than we had expected.  The pub was having their Oktoberfest complete with live music and 3 gigantic bouncy houses for kids to play on at no cost!  The girls were ecstatic!!  Though, there were a couple collapses of houses and rug burns on children, they had a blast!  It was delicious food too.

Everyone was in high spirits until we tried to get a family picture by the Zion sign upon re-entering the park.  Melt down city!  Worth it??  Justin says yes.  I say, probably. 🙂  Until next time Zion!  It was incredible!