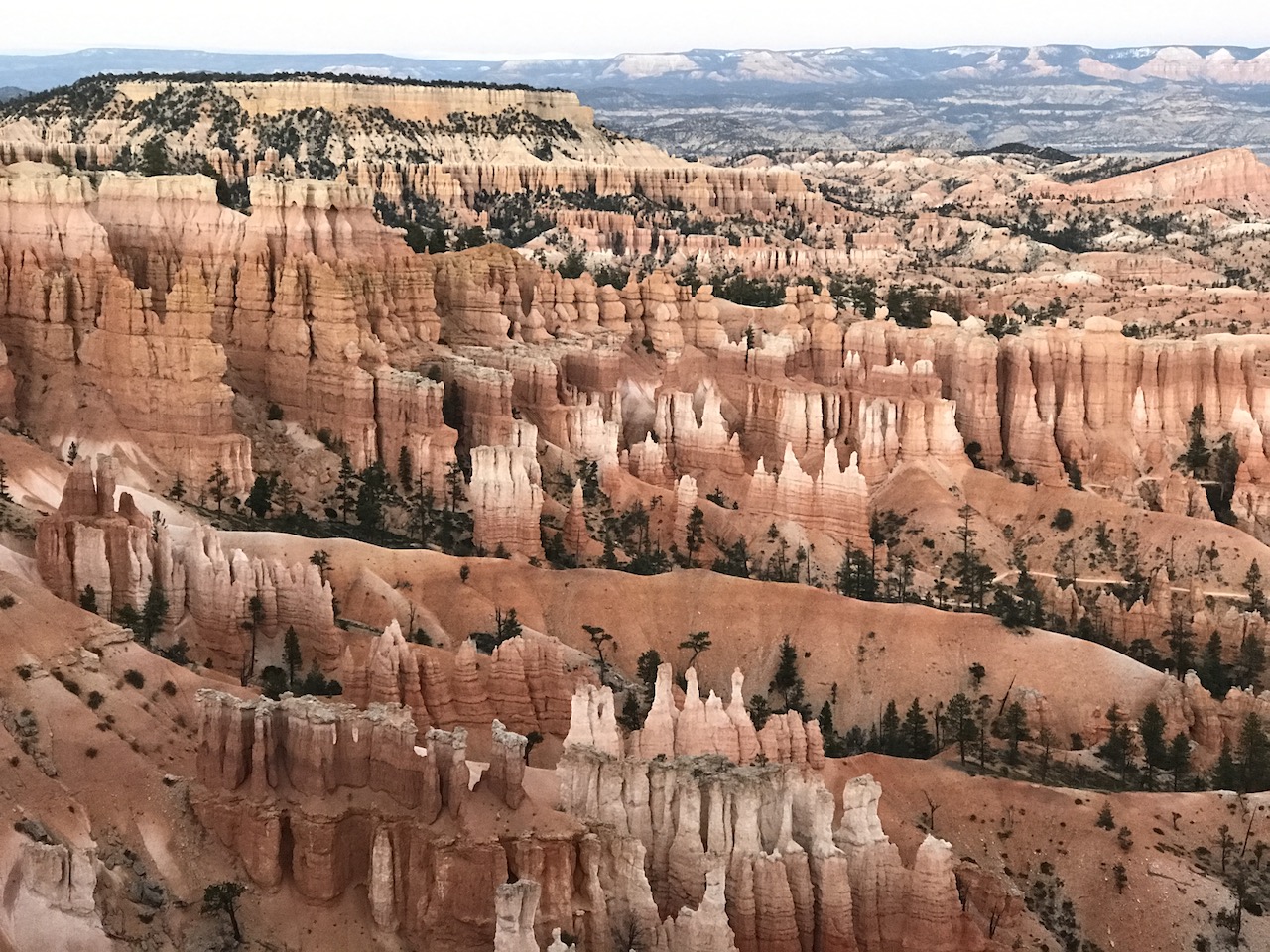 We ended up staying in Bryce Canyon for 2 days in frigid temperatures. The rocks are just so spectacular they almost look like someone painted them orange! We hiked, we biked, we explored and our 2 girls became official Jr Rangers of the park.

On the drive from Zion to Bryce we found a nice pit stop next to a field of big furry buffalo! One little one even stuck it’s head out of it’s wooden fence to say hello to us. Yes, it probably thought we were going to feed it but it still was a friendly hello.

After looking at the weather report for Bryce we were frantically looking for antifreeze to have as a back-up to put in Wobbles (airstream) tanks if needed. However, the options in the middle of nowhere are few and far between. No luck! Some reports were calling for a low of 30* while others were calling for a low of 15*. Quite different! We were moving forward and hoping for the best.

What a spectacular entrance into the park Bryce has! You enter under a beautiful rock archway through Red Rock Canyon. This is a sight to be seen yet it gets more amazing as you get closer to the actual boundaries of the National Park. The rocks become more vibrant oranges and whites and hoodoos start appearing.

The campgrounds are first come first serve at Bryce this time of year so we figured we had a pretty good chance of getting a spot since it was so cold. Sure enough, there were plenty of sites available. There was a little debacle though getting to our site of choice. A fairly large size camper towing an SUV on a trailer went down the very rough and narrow one way campground road the wrong way! Even worse, another large camper followed in his path. Oy! Justin was able to back Dimes (our tow van) and Wobbles up a bit (yet there was another camper backing up from a pull-off spot behind us) and direct the guy pulling the car into an empty campsite via a 12 point turn. :P. Oh dear!

I’m not sure why this happens but the girls have a switch that is flipped as soon as we pull into a new campsite. Maybe it’s the excitment, the exhaustion of being in the car so long, or the fact that they know we have to concentrate. Whatever the cause, they turn into crazy screaming children who are practically tearing each other’s hair out. It usually results in Justin trying to back into the site with this craziness going on, him loosing his marbles with all the screaming, me pulling usually our youngest out of Dimes in the midst of her fit of rage, Justin and I not being able to hear each other on the walkie talkies due to screaming on one end or the other, followed by our youngest’s mood deteriating for the next half hour while we set up camp and she follows us letting us know loud and clear she is miserable. Ha! It’s quite a show folks. Next campground we stay at I am initiating the rule that once we have a site chosen, one child immediately comes out with me and one stays in Dimes. I’ll keep you all posted.

On our day of arrival Justin took both girls on a bike ride to the Visitor Center to pick up some Jr Ranger books, get an accurate weather report and give me some needed time alone to cook dinner. Justin found that they have a Jr Ranger program for our 3 year old as well as our 5 year old. This was exciting since most of the Jr Ranger programs are for 5-6 and up. He also learned that the low was 14* for the night and in the 30’s for a high the next day! Eek!!

At this point, we only paid for one night since we weren’t sure how Wobbles would do with freezing temperatures with the potential for freezing pipes. We also weren’t sure how the girls would do with the cold. Since we weren’t sure if we would stay another night we wanted to be sure to make sunset at Sunset Point, just a short walk (for an adult anyway) from our site. We bunddled the girls up and popped them in the stroller. Oh my! Let’s just say I am positive all the sunset viewers were very glad when we left. Our girls were anything but well behaved. But, silver lining…the view was stunning, the hoodoos glowing!

Well, we learned that our outdoor lcd screened thermometer does not work in 14* weather. We kept the furnace temperature at 60*, dressed in our warm nighties, and snuggled up in our blankets and we stayed nice and toasty. And, no frozen pipes!! Yes! It helped to keep the furnace on i’m sure and in addition, we left all our cabinets with pipes open to the inner warmth.

When we woke it was still in the low 20’s so we decided to stay inside until it became closer to freezing figuring we wouldn’t last long in that cold. It was actually quite a pleasant slow morning. The girls and I worked on their Jr Ranger books together which lent itself nicely into schooling for the day. We also let the girls watch one episode of a PBS kids show of their choice (which we had downloaded onto a tablet ahead of time) while Justin and I prepped for our hike.

We chose the Navajo Loop Trail which left from Sunset Point not far from our campsite. Justin and I had done this trail before on our honeymoon and loved it so we thought we would share it with the girls. The trail decends quite rapidly down a series of switch backs into the beautiful hoodoo covered “canyon.”

Side note: Even though Bryce is labeled a canyon it actually doesn’t fit the definition. Bryce only has water running through it parts of the year, it is not deeper than wide and it only has one wall rather than the 2 that canyons have.

The trail follows along the floor where the hoodoos stand meandering along a dried stream bed, through rock arches, windows, hoodoos of every shape and size and past some scattered twisted barked ponderosa pine trees. It was amazing the difference in temperature the sun and wind made. While in the canyon the wind was mild and sun shining. However, on the way back up, even though we were working harder we were in a shadow with increasing wind as we ascended making it a bit nippy!

This 1.1 mile hike was deemed a 2 dime hike due to the cold and the steep climb out of the canyon. Both girls hiked without complaints focusing their attention on picking up trash (as Jr Rangers in training), exploring arches and caves and finding shapes in the hoodoos.

Our 5 year old zipped right up the climb out as well. However, our 3 year old, about 1/2 of the way up the many switch backs, wondered why we had taken her on this hike. At this point she had earned one of the possible two dimes for the hike and was offered to be carried (I actually would have preferred it at that point) but the prospect of another dime was something she wasn’t willing to forfeit. Up we went with lots of stops and me using every trick up my sleeve to make the climb not seem like a death march.

End result: all four of us made it out of the canyon with a great hike in our memory books and sunshine waiting at the top for us. We listened to a ranger talk (the last activity to check off the list of a Jr Ranger in training) and the girls were sworn in as official Bryce Jr Rangers!

We then took advantage of the amazing bike trail at Bryce and rode our bikes to the visitor center a little under 2 miles away. Our oldest rode her bike, and after some convincing, our yougest rode in the bike trailer towed by Justin. Very nice ride along the windey paved path, past the lodge, grocery store (where they have a couple of fresh veggies per day in addition to camping essentials and souveniuers) and to the museum/visitor center.

Bryce is absolutely beautiful, one of my favorite parks I have visited, but the cold is taking a toll on our enjoyment of it so we have decided to move on tomorrow. Until next time Bryce!