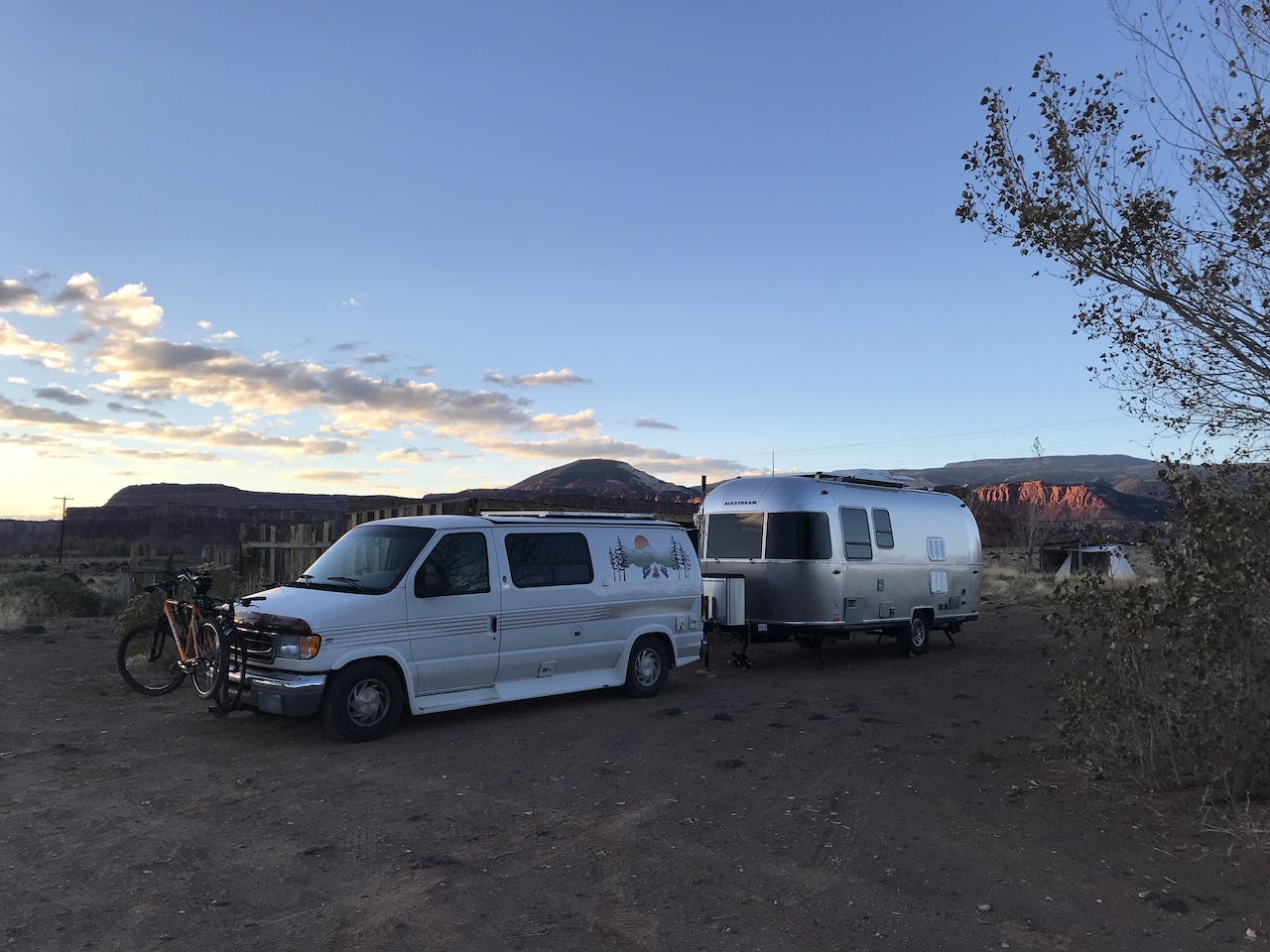 The journey from Kodachrome Basin State Park was quite the trip!  What we thought would be a 1.5 hour drive to our next location turned into more than a 3 hour drive which included climbing to nearly 10,000 ft.  We finally arrived in a cute little town named Torrey.

We left the state park around 11am, by no means an early start to the day.  Our plan was to camp on BLM land somewhere in Escalante National Monument (between the Kodachrome Basin State Park and Capital Reef National Park, where we had a reservation later in the week).

However, when we arrived at the Escalante Interagency Visitor Center they informed us that the road we were planning on boon-docking on (Hole in the Rock Road) was only accessible by 4 wheel drive vehicles due to the recent rain and the fine clay powder ground.  They gave us a tip that there was one paved road in the Escalante National Monument, Burr Trail Road, that had some spots for dispersed camping.

Using the tips the rangers gave us, we ventured onto Burr Trail Road which we were told had many camping spots.  The first pull-off we found looked good enough.  Not ideal but fine for a night or two.  Despite the fairly steep slope getting into the site it was easy to maneuver into.  We were hoping to stay hitched since it was for a short time.  However, we were a little off kilter side to side so we attempted to use our leveler blocks to raise one side.  And this is when the trouble started…

As Justin pulled Wobbles forward onto the leveler block it proceeded to sink deeper and deeper into the ground.  When walking on this ground it seemed hard packed yet with any kind of pressure you quickly learned it was simply fine sand.  No problem, we thought, we’ll just back Dimes and Wobbles up and drive closer to the inner part of the pull-off where the ground is more level.  Ha!  Easier said than done.  The combo of Dimes being pretty weak going in reverse (sorry old man) and the ground being so soft was not good.  Almost as soon as Justin started backing up the rear tires started to spin out.  One gas peddle pump later, the wheel had made a 12″ hole.  Yikes!

We were debating whether we should pull out of the site and attempt another swing at it or move on.  After recalling that the next 3 days called for rain, knowing that the ground turns into a vehicle trap with rain, and the fact that we had only very spotty cell service, we decided that it wasn’t safe or smart to camp here.

We moved onward in the direction toward Capitol Reef, continuing to look for a place to pull over and camp for the night.  I won’t bore you with the details of each site we looked at along the way but they were either closed (National Forest campgrounds), taken by others (Saturday night), with room but full of hunters, deer carcasses hung or being gutted, guns strewn about (Yuck and yikes!  No thank you!) or too cold to brave due to the elevation (it’s one thing to brave the cold if there is something amazing to see but it’s another to freeze your buns off while just off a main road in barren land).

Along our journey we seemed to be having van trouble.  Poor old dimes was barely moving up some of the hill climbs and it felt, to Justin, like the transmission was slipping.  Dimes was definitely not working well and though no smoke or steam was coming from the hood things didn’t necessarily smell great under there.  We knew we had been going up hill for a while but didn’t realize how far up we had gone until we started to see snow out our windows.  Turns out we had climbed to 9600 ft elevation!  No wonder why poor old Dimes was having trouble!

We drove on and on until finally reaching the town of Torrey at around dinner time.  The girls were surprisingly good during the car ride.  Our 3 year old listened to audiobooks I had recorded (Don’t Forget the Oatmeal with the “Hungry Monster” aka Cookie Monster at least 18 times in a row) and played with her re-stickable stickers while our 5 year old listened to a story podcast and drew pictures.  Once in Torrey, the first RV park we looked at was full so we went onto the next.

The second place in Torrey we looked at, Sand Creek RV Park, is the one we ended up staying at for 3 nights.  All the hookup sites were taken so we were put into an overflow area which turned out to be a lot nicer than the other spots!  We lucked out!

We got what we thought was the best site in the campground, complete with a lean-to split into two “rooms”.  One side was occupied by an old army looking tent with two old cots and pillows inside.  The other side had a wooden table and some random chairs in it.  From the bits of hay around and other small hints, my guess is that the lean-to was once used by animals.

The girls absolutely LOVED the tent!!  They both begged and pleaded to sleep in there overnight even after we told them how cold they would be.  No, we didn’t let them sleep in it. 😉  Best fort ever though!

Since we arrived AT dinner time we needed something fast!  Sadly, I am ashamed to say we fed our family what looked like an orange cow patty on noodles.  Ahh!  Some friendly campers next door to us back at the Salt Lake City KOA gave us some of their unused supplies, since it was their last day camping and they were flying back home.  We took their Velveeta Mac ‘N Cheese to be kind, telling ourselves that we would only eat it if absolutely necessary.  Unfortunately, that time had come!  I added herbs, spinach, peas and cut the amount of “cheese” in half (on the box they did advertise ‘real cheese and milk’ but I am extremely skeptical).  But man, there is no turning that into a tasty meal.  The girls didn’t say that they didn’t like it but they only ate a quarter of what they normally do.  Sorry those of you who are Velveeta lovers…it is not my thing!

The girls were having so much fun playing medic in the tent that we didn’t have the heart to take them away from it for long.  After lunch we ended up walking the mile to “downtown.”  Here we browsed all the shops, eateries and the grocery store.  It is a tiny tiny place but the shops were very cute!  We picked up a book on animal tracks and scat for the desert southwest.  These are things we attempt to identify whenever we hike so I hope it will be put to good use!

Justin took a nap (he had a cold and didn’t sleep much the night before) and I was able to chat with my sister on the phone (that’s right people, we had WiFi for a couple days. Whoo!), while the girls played in and out of the tent.  To the girl’s excitement, behind the lean-to at our site is the place where they store their scraps of wood, poles and other odd things.  The girls made a pretty intricate playground with the junk including a see-saw, balance beam, catapult (you mean you don’t have one at your playground??), bench and a couple other invented rides/play structures.

We decided since we were only 20 minutes from Capital Reef we would pop in to see if there were any hikes to take advantage of for the afternoon (we had camping reservations IN Capitol Reef for the following day). The girls spent the morning playing in the tent and then we headed to the Visitor Center.