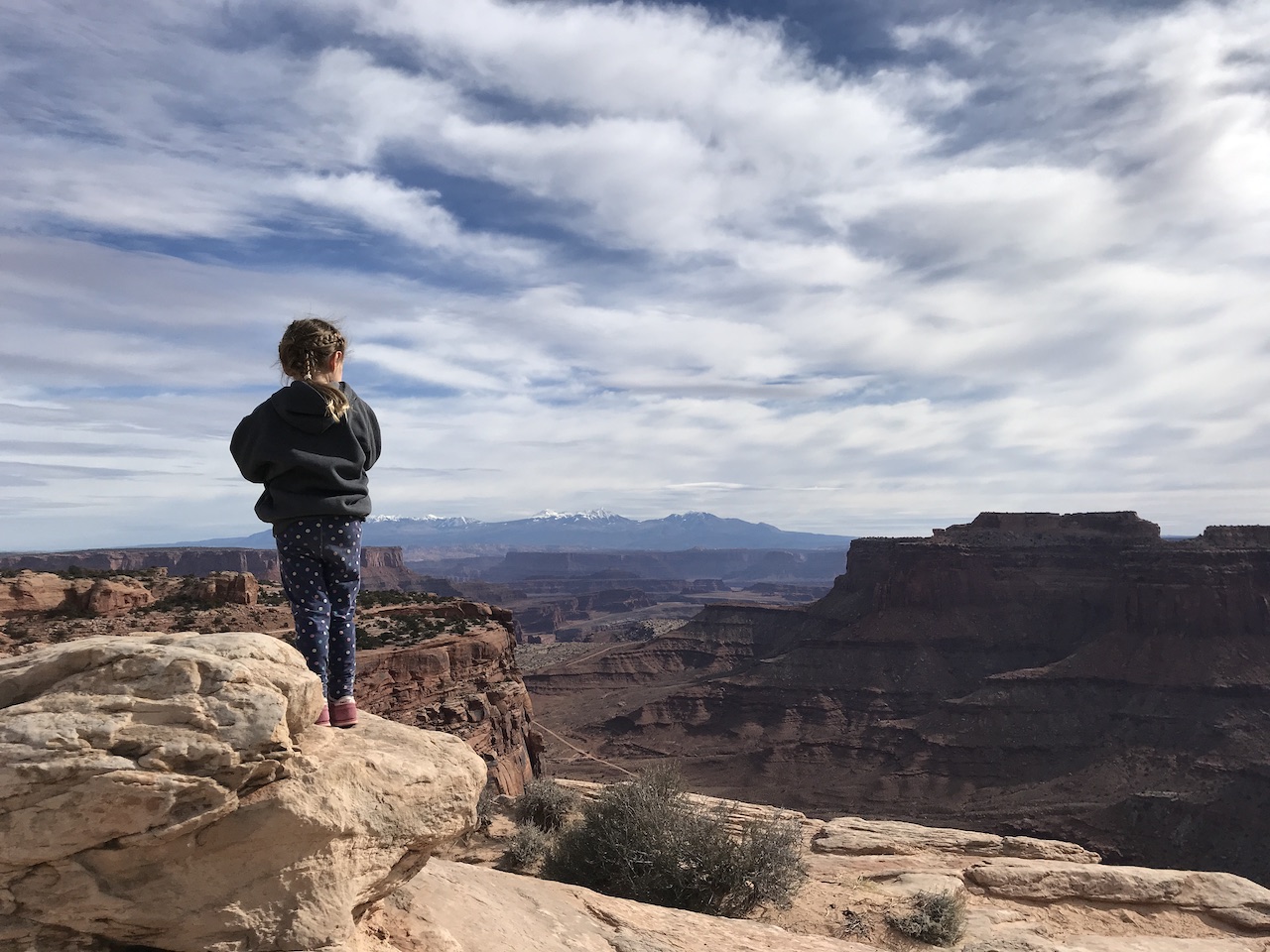 Canyonlands was another park that Justin and I visited on our honeymoon but didn’t get to explore for long, so we were excited to see what was in store for us.  The girls got to enjoy a beautiful campsite full of things to keep their imaginations flowing and we were able to hike/climb some pretty impressive rock buttes.

We were lucky enough to get one of the 12 camping spots at Canyonlands Willow Flats Campground.  The sites were beautiful, only $15 (!) and each equipped with a log shelter over the picnic table area which we were able to hang our hammocks in!  Our particular site was a pull-through giving us ample room for both Dimes and Wobbles.

It also had a huge space for the girls to play among the stocky picturesque juniper and pinyon pine trees as well as some dead growth making for great climbing trees.  One dead tree became a tree fort complete with a mail pully system, eating branches, spots for various tools and a campfire ring down below.  The campsite was so fun for the girls that it was challenging to talk them into leaving it to explore the park!

When we stopped at the Visitor Center the girls and I discovered something we had never seen before.  The pit toilets housed a normal looking port-a-potty seat and also a hole in the floor for people to do their business in!  With the outdoor peeing experiences that I have witnessed as a female, this seemed like a terrible mess.  The sign was especially hilarious.  Clearly they have had some issues in the past with bathroom etiquette.

Mesa Arch was the first hike we went on this trip to Canyonlands and the only hike Justin and I did here during our honeymoon whirl wind trip.  The Arch was beautiful and was shocking that it was standing as it didn’t appear to have sturdy supports on the side of the cliff it hangs onto.  We also saw a sign that we don’t remember seeing last time we were here asking visitors not to climb onto of the arch.  The girls enjoyed climbing rocks nearby to get a birds eye view of the view.  The hike was lovely but was a popular one for sure.

Our first evening we walked down the road from our campsite to look at the beautiful sunset over the canyons and rock formations.

This was our favorite hike in the park that we went on.  We loved it for it’s challenging climbs, views and because most of the time we were the only hikers on the trail.

The Aztec Granery is an amazing Puebloan structure hidden in the side of a butte under a natural cut away in the rock.  We hardly noticed it when we were only feet away!  Good hiding spot for sure!  The Pueblo people created the structure with stacked rocks and mud as mortar storing their seeds and grains in them.  It is believed that this granary allowed them to travel farther distances knowing they would be coming back to some food and helped them out in times of drought.

The Aztec Butte was along a sandy trail through a meadow of sorts.  I say “of sorts” because in my mind a meadow consists of lush green grasses yet this was a meadow filled with dry grasses, sharp shrubs and spiny prickly pears.  Not quite as inviting but beautiful none the less.  This is a landscape that has been unique to Canyonlands so far on our trip. The girls yet again enjoyed playing in the giant sand box that was the path.

At the base of the butte, however, the trail became entirely different as we were now ascending rock layers.  The butte almost looked like a giant was making sand castles in a rounded bucket.  The rock beneath us was very steep yet had a gritty sand texture therefore was nice to climb.  The trail did require rock scrambling and steep climbs/crawls but that made it all the more fun for us!  Every time we are on challenging terrain like this I am impressed with the girls’ abilities.  They are like little monkeys!

Once at the top of the butte it leveled off to a large platform as if a gardener had just sheared off the top of the hill.  Here there were breathtaking views and of course a hand holding requirement from the girls!

There was also a stone structure, possibly a replica of a Pueblo dwelling (we couldn’t find any information on it yet it looked like a similar style to that of the granary minus the mud mortar.  Great hike!

This trail had two viewing points.  The first was a short walk and provided pretty great views but the trail extending from the first to the second view point was even better!  The attraction on this hike was the giant crater-like canyon filled with jagged hills of salt.  Scientists aren’t in agreement how exactly it was formed but it is unique for sure.

The trail leading to the second view point was marked by cairns along open faced rock and steps cut out of the side of the steep rocky hillsides.  It was clear that someone took a lot of time creating this trail.

On the way back, we chose to take the steep climbing route up the rock hillsides.  These girls just can’t get enough of it!

The girls were able to complete their Jr Ranger Books before we left and even said the pledge out loud with the ranger.  Okay, so we told them if they did they could earn a movie night. :). Our littlest tried 3 times but she was finally able to muster enough courage to do it.  A lot was at stake so she wanted to be sure she could take part!

We had planned and paid to stay another day at Canyonlands but the morning of the last day we decided to hit the road to Arches.  We liked Canyonlands a lot but felt like we had seen enough to move on to something new.  It’s funny that since we have started our nomad ways, 4 days somewhere seems like a lot!  And, in this case, one day too long.