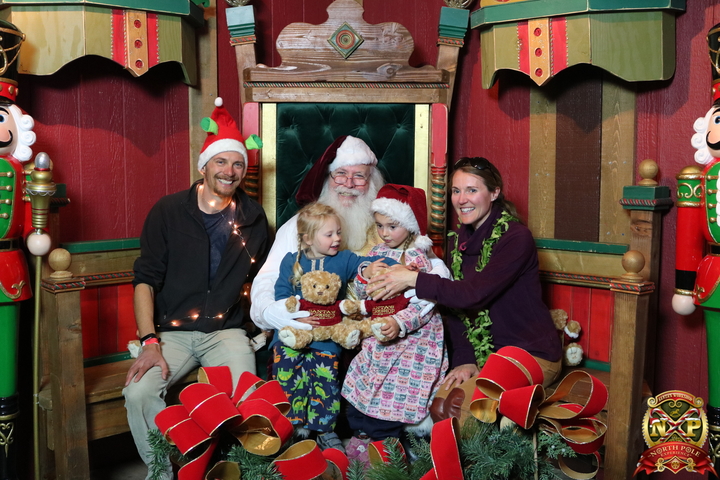 Back in Portland we have a tradition of taking the girls on a Christmas steam engine ride each year.  Since we’re traveling, we wanted to do something else special for Christmas.  We had considered doing a Polar Express train ride, but then we found the North Pole Experience event in Flagstaff.

What an incredible experience!  We drove to a local hotel in Flagstaff where we got our golden tickets and boarded a Christmas Trolly.  Once aboard the elves told us a little bit about the North Pole, the aurora borealis that powered the trolly and the vortex that we went through to get to the North Pole.

Once we got to Santa’s place we explored room after room of the magic of Christmas.  First we entered the toy hall-of-fame room with two fantastic comedic guards then entered the spinning compass room which had the epic gigantic naughty and nice book.

Next onto the toy making room where the girls were able to help dress bears which will be given to children around the world and assemble toy cars.  The girls picked lots of tutu’s. :).

We then got to see the conveyer belt room where they create the bears.  All the kids helped plop a bag of “raw materials” onto a conveyer belt.  The belt brought the materials into the bear making machine, through the stuffing phase and stitching and out popped the fully made stuffed bears.  Magical!  Seeing the amazement and wonder in the girls eyes was priceless.

Then into Mrs. Claus’ bakery where the girls got to enjoy Snowman Soup, aka SUPER sugary hot cocoa.  Our 3 year old took a couple sips but said she didn’t care for it (yes!) while our 5 year old gulped hers down. 🙂 We sipped while the elves performed a song and dance for us.

Next we got to sit in on a class at Elf University where we learned Santa’s 9 golden rules.

The mail room was next and probably my favorite of all the rooms.  The walls were packed with travel routes around the world and sacks and cubbies full of letters.  It is here that the girls wrote their letter to Santa.

Off to the control room where we saw glimpses of the reindeer and got to peak at Santa’s sleigh.

Lastly, the girls were able to sit on Santa’s lap and give him the letter they had written.  The girls willingly sat on his lap (I was surprised too!).  Soon after sitting on his lap our 5 year old grabbed our 3 year old’s hand for comfort and safety.  It was sweet!  They were given little teddy bears from Santa as well as a candy cane from the elves.

I felt like with each room we entered I could have stayed in there for a half hour and still not seen all the details of what was on display.  This was authentic craftsmanship that went into these rooms.  I was impressed!  With the exception of one elf the elves were over the top amazing!  They were cheery, made a point to come over to the girls and chat and seemed to have a playful young child energy as obviously all elves have.  All the outfits were just lovely including the pointy elf shoes with a bell at the tip.  Our oldest was especially astonished with the shoes.  The whole thing made me feel like I was a giddy kid again and the girls were just floating on cloud 9.

We warmed up dinner in Dimes (the van) that I had made earlier in the day and ate in the parking lot still all in the Christmas cheer.  We were back to the campground just in time for reading and bed.

2 Comments on “The North Pole Experience”