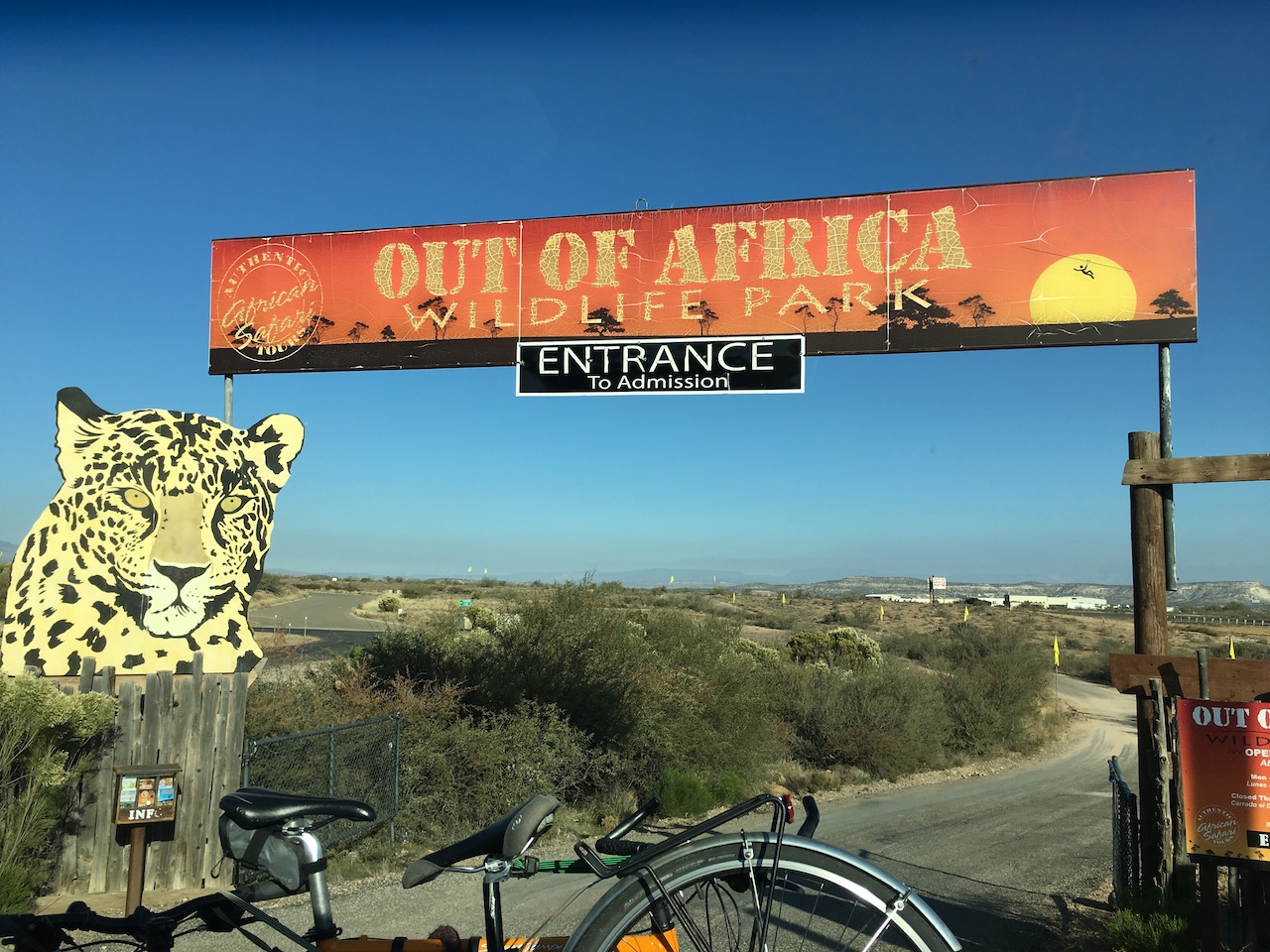 In the greater Phoenix area there are so many museums, zoos and other adventures to choose from.  Since that could get really pricey, we decided to just pick one.  A perk to choosing this wildlife park was that I got in for free since it was by birthday month!  How nice!  This lowered the cost significantly and made us feel better about choosing this adventure over others.  We had a great time at this park, with a 17-foot Python that we could pet being the highlight!

Let me just say, this wildlife park is not a zoo.  We found that a handful of things differed from a classic zoo.  In zoo’s the animals have relatively small spaces that are very clearly designed and created by humans in an attempt to replicate their native environment as much as possible and give the zoo goers some up close opportunities to view them.  However, at this park, the enclosures were quite large (it’s all open desert around so I imagine expansion is not nearly the issue as it is in or near cities).  For better or for worse, I’m not sure, the enclosures were basically fenced off sections of the desert complete with all the native shrubs and such that come with it.  The dens of many of the animals were old truck bed caps and some were dug into a hillside.  Unlike a zoo that has a whole array of barriers between you and the animals (electric fences, high walls, trenches…), this park had only high chain link fences.  There could have been something more tiger proof underground or something but it looked like just two chain linked fences surrounding the large animals.

We started off with a safari tour which is included in the purchase of the tickets.  This was really fun and quite unbelievable. They let a whole bus full of crazy tourists (our family being among them) get into a windowless bus and drive right up next to animals like giraffes, ox, zebras, emu and lots more.

We were given some leaves to feed the giraffe.  This was tricky since there were mobs of people but Justin managed to get the giraffe to eat his out of his mouth!  He didn’t even get a bit of giraffe spit on him.  Now that’s a good giraffe kisser!  Giraffes are so incredibly large close up!

Another neat thing about this park was their shows. We first went to a critter show where they talked about and let us feel a lizard and a cavy.  So neat to be able to get so close to them.

The cutest of all of them was a tiny little hedgehog.  When they let it scurry around on the ground it got nervous and cuddled in a ball next to some other rocks posing as a rock himself.  So cute!  We weren’t allowed to touch this one but the animal keeper brought it around for all of us to ‘ooo’ and ‘ahh’ over.  When it came to us it snuggled up in her palm in the sweetest little ball of spikes I have ever seen.  That little thing won our hearts!

While we were biding our time before the tiger show started we happened upon the animal trainers transporting one of the tigers from his enclosure to the arena.  They let us watch as they loaded the tiger into a trailer.

It was quite the show and quite the lead trainer who was the MC (and also in there with the tigers).  They explained to us that this was a show to help the tigers practice playing and getting used to people.  The lead trainer felt like it was an instinct to want to play yet a decision to stop before hurting the humans for the “greater good.”  He explained the greater good being that there would be no more play if a human was hurt.  The other trainers would pretend they were prey to get the tigers to chase them.  When the tiger would “capture them” it was up to the tiger to play nice.  Once “captured” other trainers would them quickly take over the role of prey to distract the tiger and get it to chase them.  All of this could have been carried out in a taunting manner but it seemed as though it was purely play (dangerous play, but playing none the less).  Both the trainers and the tigers were impressive!  Brave trainers and powerful tigers.

Since it was one of our first really warm weather days (in the 70’s!) we treated ourselves to a snow cone.  They tried to advertise themselves as “Hawaiian style” snow cones but those always have ice cream at the bottom and this did not.  The girls thoroughly enjoyed it anyways however :). They actually were enjoying it so much that it took them a couple minutes to realize there was a 17′ boa constrictor named Tapestry sitting right in front of them at the next critter show!  Thank heavens they don’t have snow cone vendors on hiking trails!  These girls would be stepping on critters left and right with the distraction!

Tapestry was incredible!  The same head trainer that led the tiger show also did this one.  This sweet snake was abused during it’s first number of years in this world taking it many many years to acclimate to people and other snakes.  Boy, this snake was so tolerant!  The keepers were letting crowds of people all come in and feel Tapestry without any noticeable concern.

They were looking out for the interests of Tapestry, reminding people to give her head more space or for people to pet gently, but they didn’t seem the least bit concerned with the safety of the guests.  I guess they all do this a lot.  It was incredible to feel the strength in that snakes body!!  It was a solid mass of muscle!  The hiss that it made as it was slithering still sent a chill through our spines.  That snake was huge!

Besides the animals we saw up close at the shows we also saw, ringtails, birds of all sorts, snakes of all sorts (mostly huge!), hyenas, a white tiger, mountain lion, jaguar, tortoise, wolves, a bear, marmots, capybaras, otters and more.  It was a fun filled day that’s for sure!

That night we stayed close by on National Forest land. It was a sweet little camp spot with lots of space and only 2 neighbors a far distance away. We have found it super helpful to keep the van and Airstream hooked up even if we aren’t completely level for one night. It saves so much time and hassle the next morning.

The sunset was beautiful as always in this area. I know I have said this before but it is so nice to see the sunset as a family since the sun sets earlier before the girls’ bedtimes. It is such a pretty time of night where everything is covered in a soft glow of pastels. It’s like a little color lullaby ushering the girls off to bed.