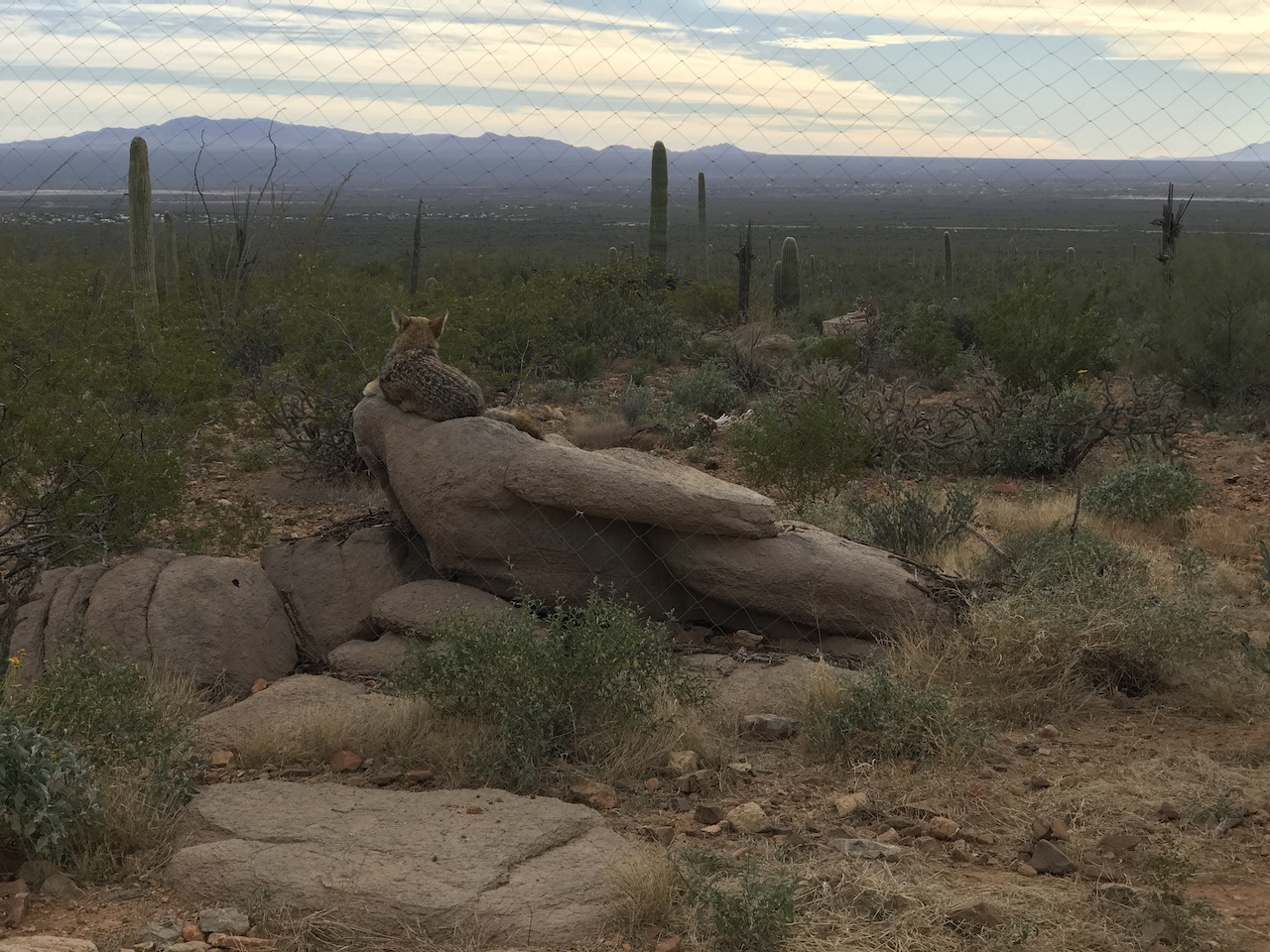 We found some nice BLM land near Tucan to boondock on that was close to Tucan and the Arizona Desert Museum. Justin and I had visited this museum previously when we were just dating so we knew it was a good one.  Justin’s mom happened to be visiting Tucson, so we planned to meet up with her for a day at the museum.

A Crack in the Plan

A day earlier we noticed a small vertical crack in our windshield so we thought we thought we should probably get it taken care of before it got bigger. As we checked with local windsheild repair shops the crack kept growing! The first place we called it was about 4″ and by the last phone call it was about 7″ long! All shops agreed the crack was too big to use a repair kit on. The entire windsheild had to be replaced. Oy! We ended up going with a place based in Phoenix who happened to have a technician located just near our BLM camping spot in Tucson who could come out to us to replace it!! We ended up meeting the friendly glass technician at the Desert Museum. With great speed and skill, the gentleman replaced our entire windsheld! I was impressed! 20 minutes and $180 later, we had a new windshield!

Justin’s Mom met up with us for the day and off we all went to the museum.

The staff and other visitors were raving about a new packrat exhibit that the girls would like. We decided to go there first which turned out to be not the best choice. It turned out to be an indoor playground where the kids are shrunken to the size of packrats.  The girls loved the place so much that they not only didn’t want to leave but after we had left our oldest begged to go back to it for the remainder of the museum visit.

SIDE NOTE: For some strange reason our littlest has been having issues with her sleep/bathroom routine. Lately she has been either waking up in the night to use the bathroom or waking up in the wee hours of the morning to do so and then not going back to sleep again. I tell you this because all of us, except Justin (how can he sleep through all this?!) have been lacking in sleep lately therefore patience is lower and good behavior is not as easily had. This info gives you some context around our oldest begging, aka whinning and complaining, to go back to the packrat exhibit.

Anyway, the rest of us mostly enjoyed ourselves at the museum. We ended up going to the two shows they offered. The first was a critter show showcased inside one of their buildings. In here they brought out a sweet little skunk, a frisky fox and lastly two gopher snakes. It is always fun to learn more about the critters in our environment and so interesting to see them up close. We learned that a skunk has three lines of defense, the last one being to spray a predator. First it will stomp its feet and hiss and second it will put it’s tail up in the air as a warning to the third line of defense. But, when they do spray they have the ability to aim that putrid smelling spray dead on their target from 10′ away. That’s pretty good!

The second show was a raptor show during which they brought out a large group of hawks and let us watch some of their behaviors. Trainers were positioned throughout the desert landscape behind the section blocked off to visitors. The trainers would call them and feed them. The hawks would swoop through ocotillos with strong sharp spikes and graze the audiences’ heads to grab their “prey.” It was incredible and a tad bit frightening to see them diving so close to the crowd, beak open wide, tallons extended.

Not really a museum

The Desert Museum is really more of a zoo, but they don’t like to call it that. In a zoo, animals are usually brought in from all over the world and are not in their natural habitats.  In contrast, the animals that live at the Desert Museum are all native to the Sonoran desert area.

Aside from all the whining about going back to the packrat playhouse, we had a lovely day at the museum.