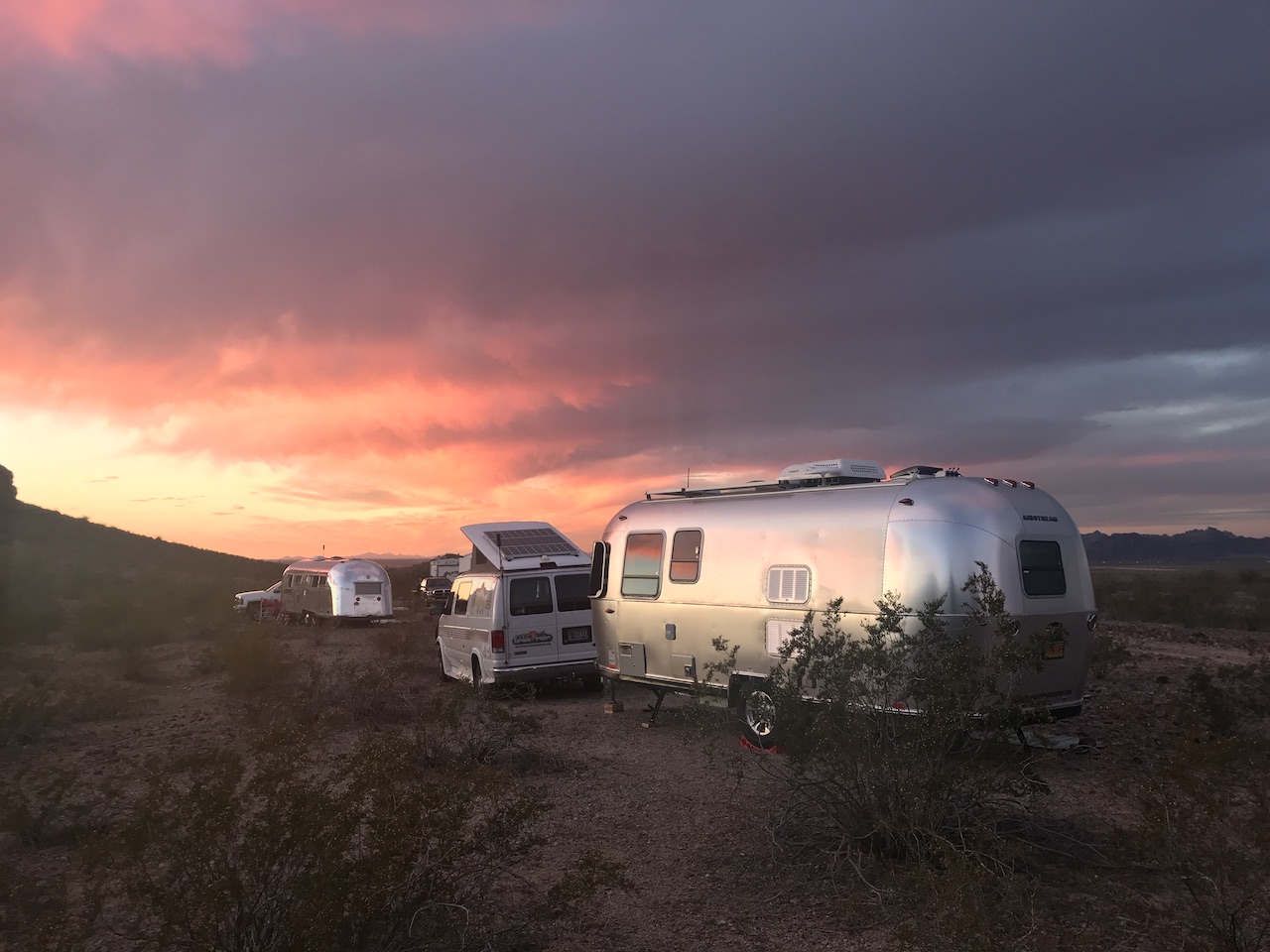 Justin and I joined a group called Full-time Families before embarking on this journey in hopes of meeting other like-minded families with kiddos that our girls could have fun playing with. In December we finally had a chance to meet up with other families from this group!

This particular event we attended was a scheduled group meet-up that all were invited to participate in.  We all camped out on BLM land in Tonopah, AZ about an hour west of Phoenix.  I’m not sure what the total turn our number was but somewhere around a dozen families came.  Families had various set ups from gigantic 5th wheels that look like apartments to our camper being the smallest there at 22′.

Our first night at the meetup we parked in the heart of the circle of campers.  This spot was nice in that we got to easily meet everyone yet also smack dap in the middle of generator land (loud!), not so nice.  The second day we popped everything into Dimes, hooked up and pulled to the outskirts of the ring with two other airstreams.  This turned out to be a perfect spot!  We really enjoyed our airstream neighbors and it was much quieter.

On the first full day we were at the Full-time Families event we joined a group hike about a mile and a half from our camping spot.  The hike went up the side of a small mountain up into a saddle and was about 2 miles round trip.  A family with a large passenger van graciously gave the 4 of us a ride to the trail head with the rest of the crew following.  Once we all started on the hike it became clear that we were moving at a much slower pace than the others.  The next oldest to our girls was 10 so we had a bit of a disadvantage.  Our girls are great hikers but we are more like a tortoise rather than a hair.

At the beginning of the hike there was pressure to hurry the girls up to keep up with the group.  It was clear that this was creating stress.  Let’s be real, being dragged on a hike does not equal fun!  When Justin and I first met he would try to take me on death marches and he very quickly learned that I hike at my pace or no pace.  Part of the fun of taking a hike is discovering new and beautiful things along the way.  This takes time!  I think Justin was reminded of this after a long sit in from our oldest.  It made me giggle a little because it was kind of a replay of when Justin and I were dating.  It goes something like this:  You are NOT going to drag me up this mountain.  I will go at my own speed.  I will sit here until you agree to walk at my pace.  And, I’m hungry!  Haha.

We didn’t win the prize for first one up the mountain, but we discovered gem like formations in the rocks.  Was it quartz?  Agates?  I’m not sure but they were amazing!

We also found moss (which we hadn’t seen in a long time), saguaros, jumping chollas, mesquite trees and agave.  It was a lovely trail which gave a wonderful view of the valley below.

Since we had ridden with someone to the trail head, we figured we should turn back close to the top so they wouldn’t be waiting for us on the way back.  The girls were tired by then anyway (after their multiple 20+ minute snack breaks) and we were running low on water and food.  The girls ate like bears on the trail!  I was glad we allotted extra time to descend because it was tricky keeping our footing on the loose rocks.  We slipped and slid our way down with 3 potty breaks, one out of 3 being poop (lucky Mama) but without any major bumps or bruises!

When we reached the van that we had arrived in we couldn’t even spot anyone descending the mountain yet, which probably meant they weren’t going to be back for some time.  We decided it would be wise to just follow the 4-wheeler roads back to camp with the girls on our backs/shoulders so we could eat lunch and get more water (which we were not totally out of).  Just as we were sure this is what we were going to do, one of the grandmother’s of some of the kiddos rode up on a 4-wheeler.  She offered to pop both girls on the back with her driving super slow so we didn’t have to carry them all the way back.  Our oldest jumped at the chance whereas our youngest was adamant that she wanted to stay with Justin and I.  The grandmother went slow while Justin and I  ran (pretty much my top speed, haha) right behind them.  After our youngest felt how uncomfortable it was to ride on Justin’s shoulders while he ran, she decided to give the 4 wheeler a try with our oldest hanging onto her tight.

I tell you, running full speed in the heat of a desert day on a rocky, dusty road in the exhaust of a 4 wheeler is something I would only do when my children are riding on the back of a vehicle I don’t absolutely fully trust.  I was okay with them riding and I knew the woman driving was very sweet and a safe driver but I wasn’t comfortable with them being on there without me right with them!  So, I ran.  Good way to force me into exercise I guess! Ha!

I think Justin and I have a hard time taking it easy sometimes, probably me more than Justin.  However, being out in the middle of nowhere with nothing close and our mission to meet new people has made us slow down. I have really enjoyed chatting with some of the other full time families and hearing their stories while I sewed and the girls played.

We found 2 super sweet families one of which our kiddos really hit it off. Both families had airstreams that were remodeled beautifully.  The kids had so much fun having tea parties together, playing outside and especially playing dress up with each other.

Our littlest and Justin did a little biking on the 4-wheeler roads around the hills nearby during the day.  I think Justin enjoyed some alone trail riding too.

Our 3 year old and I were even able to use one whole day for baking and cooking!  It was so lovely!  We ended up baking 2 giant chocolate cookies and raspberry turnovers for desert and a Christmas treat.  I love days like that!

One evening we were even lucky enough to have one of our new friends, Jetty Rae, put on a concert for us while we were camping.  The concert was so lovely with the decorated airstream in the background, the desert as the backdrop and the notes of Jetty’s soothing voice dancing in the sunset.

In meeting families and getting to know their situations we found that those who choose airstreams to live in not only have that in common with us but often much more.  Camping part or full time in a camper with a family in any vehicle is tricky but an adventure.  I feel like, in general, pairing down is usually a trade off for being able to be more nimble and explore more portably.  Living in a small space (and Airstreams, in general, are fairly small, at-least compared to most 5th wheel campers) attracts those who like to adventure and live simply.