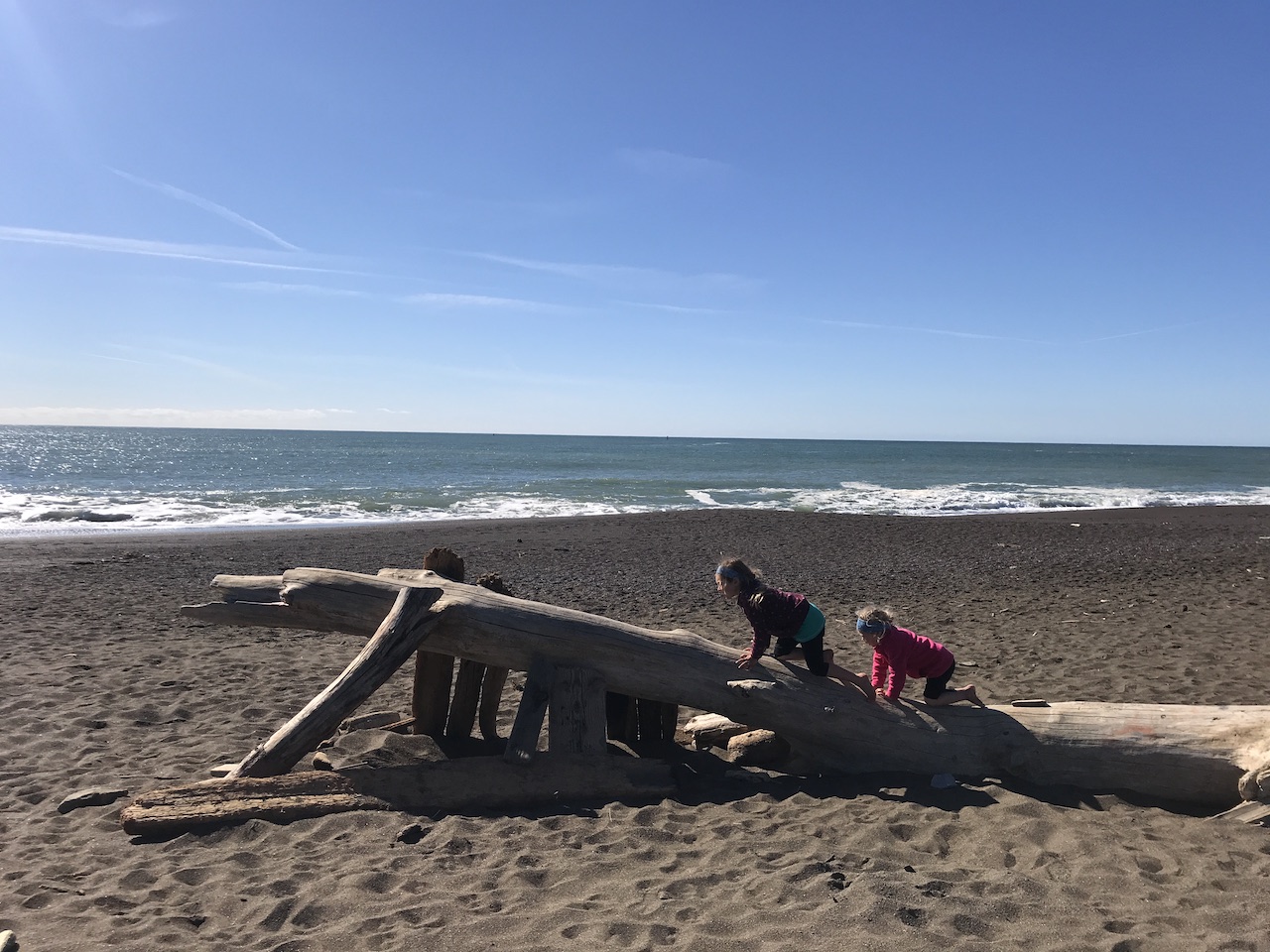 We were headed through San Francisco north to Santa Rosa, and decided to stop at Golden Gate National Recreation area for a quick pit stop along the way.

The girls had been aching for some crafts so we ended up creating a color palette while Justin drove. The girls did so well not getting paint on anything but their paper! I was worried when I chose the craft but it just seemed too good to pass up. I had the girls use their first finger as a paint brush to mix the colors so we didn’t have to deal with washing paint brushes. Toward the end of our paint session the road became so windy we had to stop so I didn’t throw up. Ick! Being car sick is not fun.

We soon went over the Golden Gate Bridge and soon after took an exit and then went through a one lane tunnel.

The tunnel had a sign informing drivers that the red light was 5 minutes long and asked that engines be turned off. I appreciated those signs. Otherwise we would have felt like we were waiting for ages and wondering if the light was working properly. It was one lane alright! Being in a one lane tunnel with a camper feels very small. And Wobbles is a narrow one! There was a bike lane going both directions in the tunnel which must be a little unnerving passing through with trucks on the road.

We decided to take a pit stop at Martin Headlands which is part of Golden Gate Recreation Area. The whole area is very large so we just had to randomly pick where to go. We chose it because it had a Jr. Ranger book for the girls and it looked like there were lots of options of things to explore including beaches and forts.

The visitor center was in an old church, built in the 1940’s, used on the military base.  The girls and I walked around checking out their mock military bunk house, local herbs and plants that were used by the Miwok culture (an American Indian tribe) and looked through their many books.  We huddled up into a KO-Cha (straw shelter) where we read stories the girls had picked out.

Since it was a driving day we had to make things quicker than we would have liked.  After reading some books we took a break for lunch and gave the girls a little bit of time to work on their Jr Ranger Books.  We talked to the volunteers in the visitor center about what we should see while we were at Marin Headlands; the place is huge! We had a peak at the map and decided since we were limited in time to do a short 3/4 mile hike to the beach.

The walk was beautiful as the trail walked up and over a grassy cliffside from the mainland to the shore.  The girls walked at a record pace, but even so we only had 20 minutes to let the girls play on the beach before we had to turn back.  As you know, 20 minutes is not nearly long enough to play on the beach.  The girls had just finished making their fort when we had to head back.  They were heartbroken they didn’t have time to play in their creation.  It felt way too rushed for me as well.

Bt the time we got back to Dimes we only had a couple minutes to spare before we had to hit the road in hopes of avoiding Friday rush hour traffic from San Francisco.  The girls only had one activity left in their Jr Ranger book to finish it but everyone was too flustered and rushed and so the girls no longer wanted to finish it.  I didn’t blame them either.  The great thing about the Jr Ranger books is they teach the girls things as they are having fun doing so.  It shouldn’t be a forced thing and it felt like it was when we were in a time crunch.  So, begrudgingly we continued on our drive without Jr Ranger badges.  And, sadly, our driving time was doubled because of the time we did spend at the recreation area (we hit that traffic).

Driving days are tricky days for schooling and making pit stops.  In hind sight what would be nice is if we plan to stop somewhere along the way we need to find camping somewhere near by that pit stop to allow us to enjoy that place longer.  Unfortunately so close to the big cities this isn’t always possible.  The recreation area seemed like it was full of fun things to explore though.  Next time!

The girls saved up enough money (from hiking rewards) to earn themselves a prize.  They each chose snake balloons!  We found that the bike pump worked great to fill them up and the girls had a blast doing so.  We ended the day on a good note.