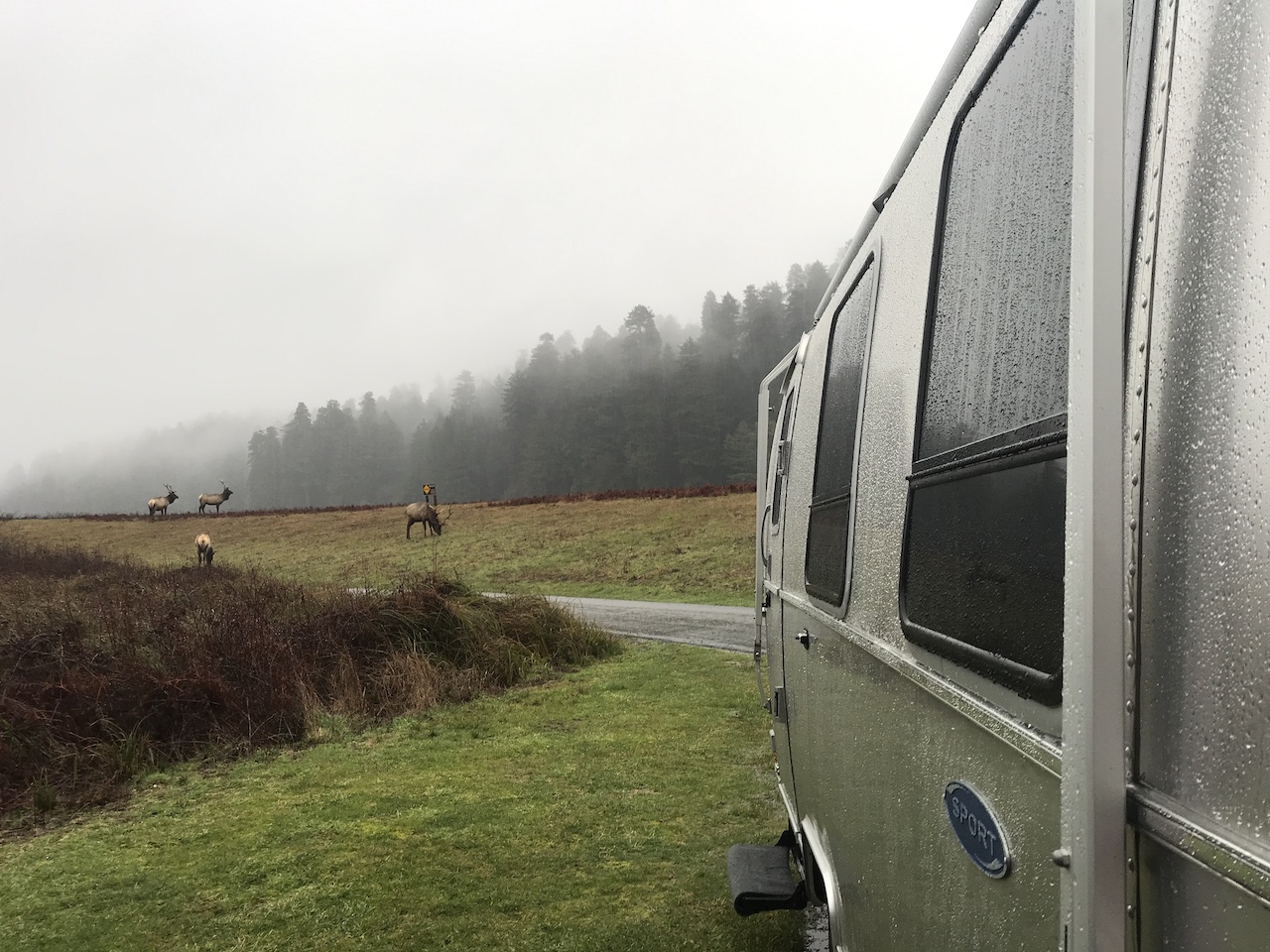 This was the third day that the rain had been staying steady here in California.  Where there are big trees, there is rain.  We stayed in the scenic yet soggy Elk Prairie Campground within Prairie Creek Redwoods State Park for one night. The drive from Santa Rosa to the Redwood State Park was greatly flooded due to the heavy rain.

The drive was crazy way along Rt 101 on the California coast!  It was pouring and most of the land around the road was heavily flooded.  There was vineyard after vineyard whose vines were in giant pools of water.  We even saw one vineyard in which the water had gone over the top of the vines.  I don’t know what that does to the vine but I can’t imagine it’s good.  Root rot probably sets in fairly fast with this much water and no clear end in sight to the rain.  I felt bad for those farmers!

The rivers were all engorged and most bridges we passes over the water was up to the bottom of the bridge.  I was waiting for at any moment the force of the rivers to pour over the road.  I wouldn’t be surprised at all if by the end of the day they had.  It was incredible to see that much flooding all around.  On some of the two lane roads one lane was closed due to flooding, mud or rock slides.  Luckily we passed through safely.

We half stopped for lunch along the way but didn’t want to stop long due to all the rain.  Our oldest even took on the task of making her and her sister sandwiches while Justin and I got other things together.  So helpful!

We had planned to camp in the first patch of redwoods along Rt 101 (Humboldt Redwoods State Park), but because of the rain and flooding, we decided to keep driving north.  Northern California rain was predicted to be lighter and the storm end easier.  We were trying to find some window where we could explore a park or go on some hikes without a downpour.

Upon our arrival to the park we learned that Redwood State Park and the Redwood National Park have a partnership where they are basically combined into one.  Who would have thought?  We haven’t experienced this before.

We arrived at our campground of choice, Elk Prairie, past dinnertime that evening.  Upon arrival we saw how the campground got it’s name.  There were 3 male elk with impressive antlers and 1 female elk grazing in the campground.  They didn’t seem disturbed in the slightest when we drove slowly a mere 5 feet away to our campsite.

At one point I explored a road on foot to be sure it was okay to enter while towing.  Justin used this time to check out the other open camp loop.  However, this now meant that I would have to pass through all the giant elk in order to get back into the van!!!  Obviously not a smart thing to do!  So, I radioed Justin to come get me, haha.  My chauffeur soon arrived and we found a spot to camp.

It was so neat to watch the elk out Wobbles window while we got ready for bed.  They were just outside the camper!!  They are such massive creatures.  Our oldest said, “I’m not going outside with them out there!”  Truth be told, nobody wanted to be out there in the downpour so it was a deal.  It was so tricky getting pictures of them through our windows.  With all the rain, our cameras only wanted to focus on the window droplets rather than the elk just outside the window.  At one point Justin went outside and wiped down the outside of the window with his towel while I wiped the condensation off the inside (everything is so moist!) and I started snapping photos, but not one focused on the elk.  I eventually sent Justin out in the rain to get some pictures.  We felt lucky to see so many so close.  They are really such beautiful powerful creatures!

The next day was a soggy mess but not horribly cold and we had been cooped up for too long so we decided to go for a hike.  With the recommendations of a park worker we went on a 2.4 mile loop trail through old redwood growth to give us a little taste of the beautiful park.  We dressed head to toe in our rain gear and headed out!

We weren’t in the desert anymore!  It was rainy, the trees were so tall you had to strain you neck to look at them, and there was real soil!!  No, we definitely were not in the desert anymore.  What a beautiful sight it was!  The trail was full of thick undergrowth, soft wet pine needles, massive beautiful trees and moss!!  It was so refreshing!  Rain and all, we were happy to be in this wonderful place.

Due to all the rain and flooding in the area the trail was filled with giant puddles or places where a streams had overflowed their regular route over the trail.  And, unfortunately, our 5 year old’s shoes are not waterproof.  We had bought her used boots for this trip that we had thought were waterproof but proved not to be.  Since she would only be using them a couple times during our trip I made the decision not to buy her new boots.  In hind sight that was a bad choice!  She actually could have used them a lot but…now that our trip was coming to an end it really didn’t make sense.  Our 3 year old’s boots seem to only be semi waterproof.  As such, the girls got rides over a lot of puddles.

It really put our life as humans in perspective to be reminded that some of these magnificent redwoods are over 2,000 years old!!  Can you imagine all the things they have seen?!  Absolutely incredible!  A good number of the redwoods had the centers of them missing creating magical mossy fairy forts inside.

These weren’t just little forts either.  One that I climbed inside was as wide as one and a half of me stretching my arms out from my side.  It was massive!  And the tree was still living and appeared to be unfazed by the fact that its middle was missing.

Many of the redwoods had experienced fires in their distant past but since their outer bark holds so much water it creates a fire resistant jacket for the tree.  They live on to tell their story.

One of the trees on the hike was called “Big Tree.”  This isn’t the oldest or tallest tree in the park but it is true to its name.  The Big Tree stands at 286 ft tall, with the diameter of 23.7 ft and a circumference of 74.5 ft and is estimated to be over 1,500 years old! Outstanding!

By the time we were halfway through our soggy hike all of our hands felt like ice!  I hadn’t thought to bring our waterproof mittens because it wasn’t frigid temperatures out.  But, do to all the rain, our hands were frozen!  We had the girls bundle their hands into their sweaters beneath their rain coats but even so, by the time we had 3/4 of a mile left to go, we were all wishing to have someplace warm to dry off in!

We sent Justin to the camper to fix lunch while the girls and I collected a hiking patch.  When Justin got to Wobbles he told me it took him over a minute to just unclip the backpack due to his frozen fingers!  He had to turn the key to Wobbles with two hands with his hands working more like claws than hands.  Fingers are useless if they are too cold.  We happily pealed off our wet layers and sat in front of the heater until we thawed.

On our way out of the redwoods we saw more flooding, flooding and more flooding!.  Onward on the curvy Rt 101 we travelled.