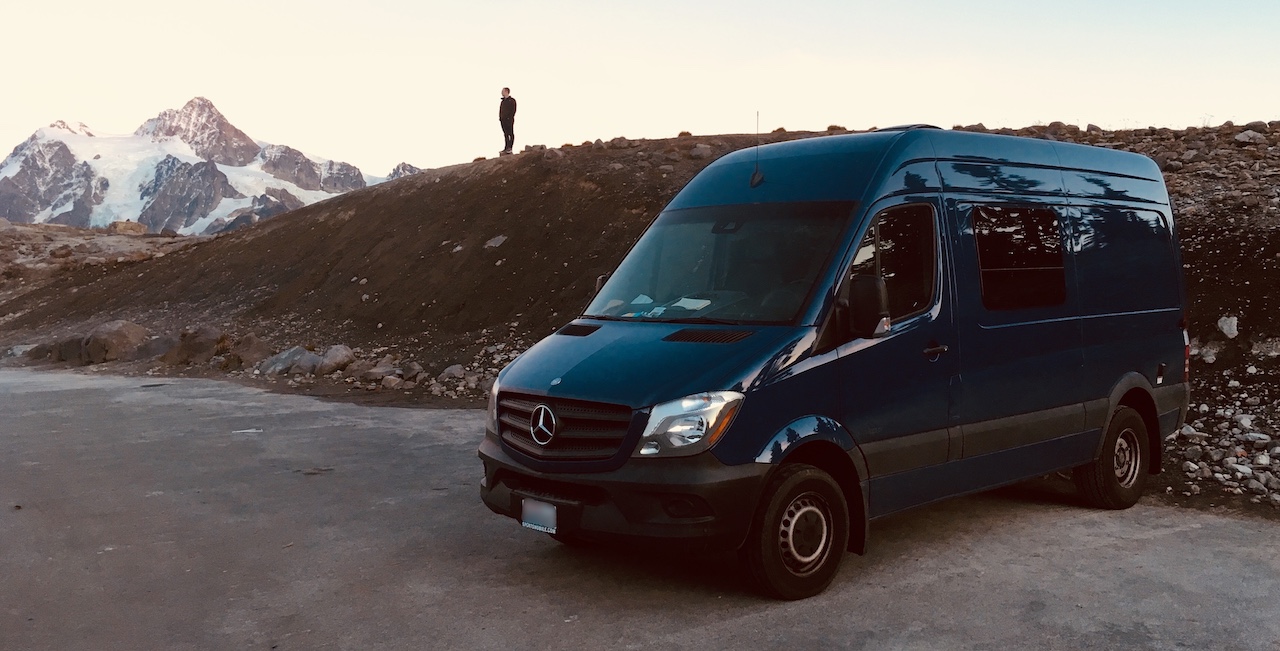 We love our current van, Dimes. However, we didn’t purchase him to be a tow vehicle. When we bought the van we were envisioning weekend to week-long trips. The van is perfect for that. Now, however, we’re focussed on longer-term travel towing our Airstream, Wobbles. For that purpose, Dimes could be improved upon.

Further, although Dimes does have a V8 engine, it’s on the smaller size as far as displacement and only has a 4-speed transmission. Towing 4500 lbs Dimes did pretty good on flat terrain. But as soon as things got hilly, Dimes really struggled to maintain speeds faster than 25-40 mph. Further, our already-not-great towing gas mileage of 10 mpg went down to 9 or 8 on steep hills.

Now the Sprinter is no monster truck by any means. It has a much smaller engine, in fact, than the Econoline’s 4.6L V8. The Sprinter we’re looking at has a 4-cylinder turbo diesel. That’s half as many cylinders!

Looking at side by side specs:

*1 GVWR (Gross Vehicle Weight Rating): The maximum combined weight of the vehicle and all the cargo.

*2 GCWR (Gross Combined Weight Rating): The maximum combined weight of the vehicle, all the cargo, and any trailer being towed.

The sprinter is actually weaker in both the horsepower and torque departments. However, it has 2 things going for it: low-end torque and a 7-speed transmission.

While the Sprinter has slightly less maximum torque compared to the E-150, it has it at 1400 RPM compared to 3250 RPM on the Ford. With the Ford, we found that on steep inclines we could do OK if we could get a ‘running start’ and get the RPMs up before we got to the steep sections, but if we slowed for any reason (like if we got stuck behind a semi), then we were done for and had to finish the climb at 25 mph in first gear.

My hope is that with the low-end torque of the Sprinter diesel we’ll be able to consistently crawl up hills at a moderate speed, rather than having to play the RPM game.

As far as gears go, we found with only 4 gears we were constantly bouncing between 2 gears on inclines. Second gear would get the van up to speed, it would shift to 3rd, struggle to maintain velocity, and then drop back down to 2nd, over and over. Three extra gears will hopefully be a big improvement in that area.

On the Sprinter forums folks claim that the van tows trailers similar to ours really well. Fingers crossed that they’re right!

When it comes to payload, there’s no comparison– the heavy duty Sprinter can hold over 3 times as much weight as the light duty Ford. We won’t have to count every pound like we did in poor old Dimes.

Dimes has a pop-top roof tent. This is awesome for having space to sleep 4 people in a van that still fits in parking garages. However, that tent space above the ceiling obviously isn’t useful for storage when we’re driving and the pop-top is closed. As such, the storage in Dimes is somewhat limited.

This wouldn’t be an issue if we had a larger trailer, but our Airstream also does not have much storage (at-least for 4 people living full time out of it) or weight capacity (being a single axle trailer). Therefore, we rely on the van for extra storage for food, clothing, sporting goods, extra water, etc.

We usually had extra stuff filling up the floor space in Dimes, such as jugs of water, firewood, and a basket of snack food for the drive. Because many of the cabinets are low to the ground, this stuff on the floor also made it hard to get into the cabinets. Our youngests’ car seat also blocked another cabinet.

This might all sound like trivial stuff, but we really found that our #1 frustration on the road was not having the stuff we needed easily accessible. Having to dig and empty out an entire cabinet to find the thing you need on the bottom gets less fun the more often you do it! :). These things aren’t a big deal at all for weekend trips or week-long trips, but it feels different when it’s “full time”.

Being able to stand up

Since our Airstream is quite small for 4 people, it really serves only as a bedroom, kitchen and bathroom. There is no living space left over, and there isn’t a table (unless we convert the girls’ bed each day, which we found we didn’t care to do). Therefore, the van serves as our “living room”.

In Dimes we can stand up in a section of the van when the pop-top is up. If we were in warm weather all the time, we probably would have popped the top of Dimes more. But more often than not, we found the temperatures weren’t high enough that we wanted to turn our roof into a tent.

Therefore, we spent a lot of time crouching in our living room. Again, if we were just doing a trip for a few weeks this would not be a big deal at all, but after multiple months we found ourselves really wishing we could just stand up!

Ok, it’s not completely ours yet.. but we’ve put a down-payment on it and we should have it in a few weeks.

The van is a 2015 Sprinter 3500 that we’re purchasing from a gentleman through Craigslist. He bought the van used and then had Sportsmobile convert it into a camper van.

There are a lot of Sprinter camper vans on Craigslist. However, there are almost none that are capable of seating and seat-belting more than 2 people. Most van conversions are made for 1 person or a couple. Many try to cram all the conveniences of a full-size RV into the van (fridge, sink, stove, sometimes microwave, toilet and shower). These appliances can take up a large percentage of the available space in the van.

For us, we need to be able to safely seat at-least 4 people. We also already have a kitchen and bathroom in tow, so we don’t need most of those things in the van.

What we do need is:

Fortunately, the owner of the van we intend to buy had similar requirements when he had the van built out. It’s pretty much all storage. There’s no kitchen (or water tanks), no bathroom, but there are lots and lots of cabinets. There’s also a great Espar diesel heater.

Just like Dimes, the rear bench seat seats 3 passengers and can fold down into a bed.

We’ll add a fridge, solar panels, a front-hitch for our bikes, and probably do the lithium battery upgrade again. But otherwise it’s perfect!

There are few things we’ll miss about Dimes when we get the new van.

Anyone looking for an awesome GTRV Camper van? We’ve got one for sale!

2 Comments on “Upgrading to a Sprinter van”