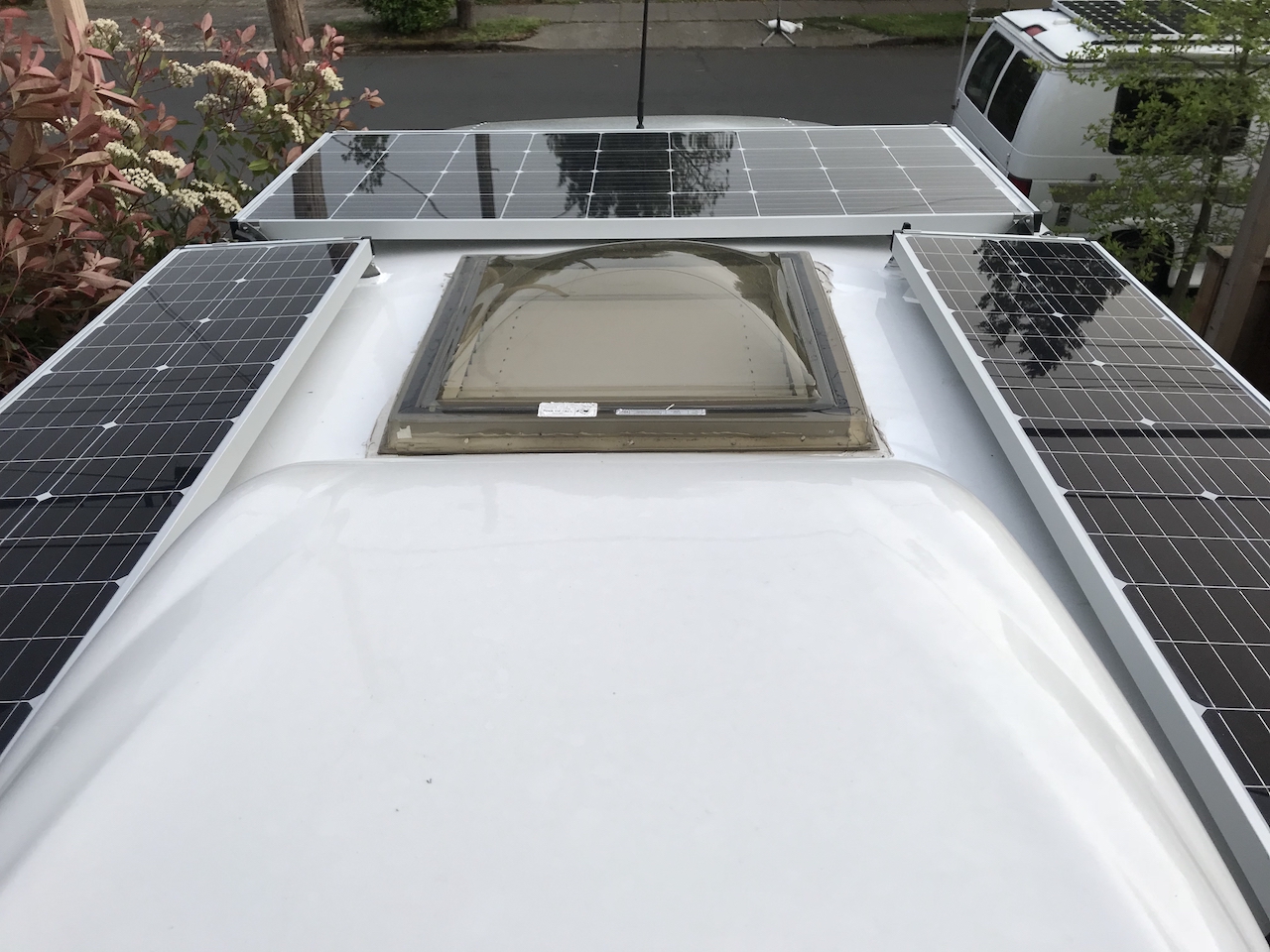 The first part of our Airstream electrical is detailed in the following post: Airstream Electrical Upgrade Part I. In that post, I covered upgrading the batteries to lithium, installing a battery monitor, inverter, charge controller and surge protector. The final piece of the puzzle was the solar panels.

The first step was to get up on the roof of the Airstream and measure. I found the roof was strong enough to walk on as long as I was careful to stand where the lines of rivets were (indicating an interior support).

On our roof we have a skylight, air conditioner, fantastic fan vent, TV antenna, and black tank vent, all of which needed to be worked around. We also have the pre-wired solar panel plug on the roof, which meant I wouldn’t have to drill a hole into the Airstream to run wires, which was a big relief.

Solar panels for 12-volt systems like ours come in roughly 3 different sizes:

There are variations between different brands, but they generally are within a few inches of the above dimensions. Unfortunately, being one of the narrowest Airstream models, the Airstream Sport 22 doesn’t have a lot of spots that are wide enough for many of the above panels to fit.

Fortunately, there’s one company out in Bend OR that makes a narrow and long panel: Zamp. Their 90-watt panel measures 58″ x 13.5″.

Using the above options, I determine we could fit a maximum of 490 watts of panels on the roof using the below layout (note that the wattages indicated on my sketch are wrong, due to ending up with different panels than I originally designed with– the 175w ended up being 170w, and the 80w panels ended up being 90w):

For the time being, to save both cost and weight (our Airstream with only 1 axle doesn’t have much payload capacity to spare) I decided to install just the front 3 panels (2x 90 watt, 1x 170 watt).

As I discussed on the post about our van solar panel installation, I knew that I wanted to install the panels in parallel rather than series to make the system less susceptible to small shadows.

However, when installing panels in parallel it’s important that the panels all operate at nearly the same voltage. If the peak operating voltage of the panels are not properly matched, then the efficiency of the system is reduced. On the van this wasn’t a problem as I was installing 3 identical panels. Here, however, I was installing 2 different types of panels.

I really wasn’t keen on the idea of drilling holes in the Airstream roof. Fortunately, AMSolar sells mounting kits that use 3M’s super strong “VHB” (very high bond) double sided sticky tape. Their mounting kits aren’t cheap, at $80 per panel, but they made the job a lot easier and I didn’t have to drill any holes.

The mounting options were a bit confusing, so I gave AMSolar a call and they were super helpful in walking me through my options. I ended up changing out some of the mounts in their mounting kits for their tall “L-foot” so that the panels would sit high enough on the roof to account for the curvature of the Airstream. They also suggested that I double up the mounting feet on the leading edge of the front panel, as they would experience more force from wind on the highway than the other mounts.

As a huge side benefit, the pricing they were able to offer me over the phone on the panels was much better than what was listed on their website.

Since our 2018 Airstream Sport came pre-installed with “Zamp connectors” on the roof, and I purchased Zamp-brand panels, the panels came with the matching connectors to just plug into the roof-top sockets. However, the wires were too short for the locations I was to be mounting the panels.

Therefore, I had to open the boxes on the back of the panels, unsolder the existing wires and solder the longer wires I had purchased onto the tabs. I then spliced the Zamp connectors back onto the ends of my new wires.

I certainly could have just purchased extension cords to plug in to the existing wires, but I’m not terribly fond of the Zamp connectors as they don’t provide any latching mechanism and could easily just wiggle their way apart, so I wanted to minimize additional connectors on the roof.

I then cleaned the roof where the mounts were to sit with alcohol and applied the 3M VHB tape. Lastly, I used the Sikaflex to seal around the mounts to ensure that water couldn’t penetrate and weaken the tape (as recommended by AMSolar).

I ran the wires to the back of the Airstream where the solar pre-wire connectors were and plugged in the Zamp plugs.

On the inside of the Airstream, the wires from the roof-top Zamp connectors terminated under the front bed, right where I had installed the new battery system and charge controller. Hooking those 2 wires up to the Redarc charge controller completed the installation.

All-in-all I was very happy with how it turned out. The install was a relatively easy 1-day project, and the sticky-tape panel mounts have held up to thousands of miles of highway driving and strong winds.

The only issue we have experienced with the mounts on the road is that one of the bolts securing one of the panels wiggled its way out (and I noticed that the panels was sitting low in one corner where it had detached). We had to stop at a hardware store and buy a new bolt, and then I added Loctite to all the bolts to ensure it won’t happen again.