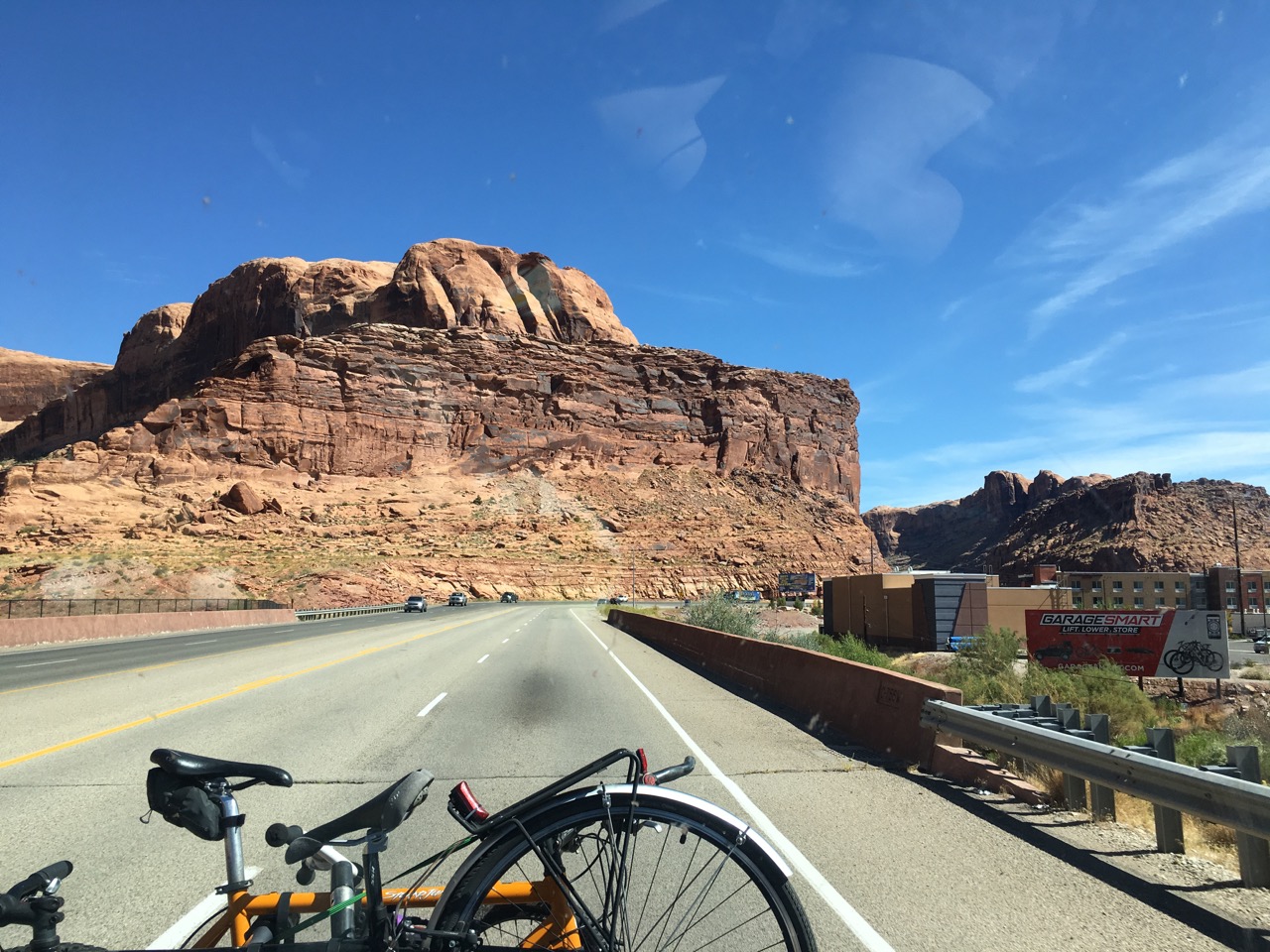 We had a long driving day with a promised swimming pool reward at the end of it.  The girls did great for most of the trip and we were able to arrive at Canyonlands RV Park around 2pm.  Not too bad!  We had time to have a good swim in the pool while Justin went grocery shopping, eat a delicious giant salad for dinner PLUS go to the playground before it was reading time.  Woo!  Success!

The next morning our little one woke bright and early so she was able to get in all her schooling with me over in Azul before anyone else woke.  I always dread getting up super early when I’m doing it but then once I’m up it kind of feels magical, like time has paused for me to get things done.  It feels good to have some accomplishments achieved before I start my day!

After doing schooling with my oldest, we basically spent the whole day playing in the pool and relaxing.  The girls played with their “babies” taking them for walks in the stroller and played hide and seek at the new playground at the RV park.  Some hiding places were so good I didn’t know if we’d be able to get them out again!

I made some of my best friends’ special brownies in the solar oven which we all enjoyed for dessert after our dinner.  While in Moab, we took full advantage of having a well stocked grocery store just around the corner.  We had giant salads for dinner almost every night, which we all devoured!  The last night we were in Moab Justin went to the grocery store 3 times for various items.  He just could’t get enough!  You really don’t know how lucky you are having a well stocked grocery store around until you loose it.  Fresh veggies never tasted so good!  The girls even enjoyed sucking on fresh lemons.  😛

The next day we tried to get an early start to do some rock climbing but as it turned out we didn’t get out the door until nearly 10am!!  We’re not sure when this happened but we remember within the recent past when we would wait hours in the mornings for stores to open (since our kids would wake us up at 5am) and now we feel like a quarter of the day has passed by before we’re all up and around.  One issue is our oldest would like to go to sleep sooner but we keep her up until our youngest is asleep so they don’t keep one another up. Therefore, our oldest sleeps in as late as 7:30am and one morning 8am!  Also, it takes us a bit longer to get things together in the camper verses back at home in Portland.  It’s such a tiny space that everything has to be taken care of right away.  This is usually a good thing but when we’re trying to get out of camp early, not so much.

Anywho, we were a bit late getting out but we did make it to an easy climbing spot we could all enjoy.  It was called the School House Slabs with a rating of 5.5.  I only know that because Justin told me and it really means little to me as I’m not an avid climber.  Sweet Justin used to be a climber before kiddos and he has had a renewed passion for it now that the girls are old enough to climb a bit.  He has restocked himself with all the many safety apparatuses and gear needed to safely climb.  He is very excited about the girls enthusiasm and so very patient and encouraging with them as they learn and become more confident in their skills.

The girls did really well climbing and were overall very patient while I took a turn climbing and while Justin climbed up to set up the climb and repelled himself back down after being on belay back up the rock.

The climb was right next to the road which was nice because we basically could be on belay inside Azul, hop out and do the route.  The down side was there were often noisy vehicles going past while climbing which was a bit jarring.

We had to stop climbing after all of us had gone up once because the rock was getting way to hot to the touch.  It was a lot of fun!

On our way back from the climb we gave into the delicious temptation to buy some organic peaches and plumbs from a road side stand.  Oh my goodness, they were tasty!

We also stopped at a used gear shop called Moab Gear Trader.  We had gone there last year and really loved it!  It’s actually tricky to find good used gear shops.  Still, none hold a flame to Next Adventure.  Portlanders are very lucky indeed.  We ended up finding a pair of climbing shoes for me at the store so that I could climb without slipping off the rock with my sneakers.  If it were up to me I would have just kept climbing with my sneakers as they are not bad but Justin insisted I get a pair so that I could be safer on the rock.  Very thoughtful.

Into the pool again we went with some diving balls we found at the RV park store.  So much entertainment packed into each of those diving balls!  Both girls had a blast with them and our oldest made a good friend in the pool, he and she taking turns retrieving them.  Well worth it!

On our last day we attended the pride festival in Moab.  It was a nice get together with some very sweet people.  One of the booths was a library on the back of a bike.  The lovely library (at which we bought a handful of books at last year during their sale) was giving away books!  Their entire display of books were for free!!  Oh man, it was SO hard for the girls and I to not take some.  Books are something that make us happy but sadly we don’t have the space.  We compromised on reading a handful instead of taking them home.

At another booth the girls made beautiful flower crowns.  Such a simple but special thing.  They made their crowns part of their afternoon snack as they chose to make the base out of rosemary and sage.  Yum!  It was funny to watch them take off their crowns, take a big bite out of them and then pop them back on their heads.  It’s as if they had turned into little goats!

Off into the march at the pride festival we went!  The march had some sound system technical difficulties but regardless was fun and for a good cause.  We were glad to be part of it.

As I do in all cities that we visit, I was on the hunt for a good bakery.  Three came up on a Google search and another dessert place caught our eye as we were walking around.  I have to say, bakeries are not Moab’s strong point.  There was a donut place that looked similar to VooDoo Donut in Portland with very sugary toppings which wasn’t what we were necessarily looking for anyway but they were down to only 5 donuts by the time we walked in mid-morning.  There was a muffin place that looked promising but they too were down to a handful of muffins and it looked like their main focus was on cafe food and beverages so we skipped over it.

The last place we looked at had sugar or sweet in the name so we didn’t have high hopes but I looked in anyway.  Sure enough, everything sold there was extremely sweet and sadly was heavily packaged in plastic.  Guess where we ended up finding delicious treats?  The wonderful little Moonflower Community Coop in town!  They had a lovely fresh selection.  We ended up getting a vegan berry citrus scone and a spiced pear muffin.  They were both delicious!  I recommend the coop to anyone looking for a treat while in Moab.

After our last dip in the pool (and when I say dip I mean an hour and a half) we all got clean!  Thank goodness for handicap showers to bath a whole family in.  Well, the ladies of our family anyway.  When I told Justin I was allotting an hour for us ladies to take a shower he thought I was crazy.  Silly boy has never took two little girls into a public shower house and bathed them.  It is in no way relaxing or fast moving.  We had completed our group shower in 55 minutes.  Record timing!

Before we left Justin packed all our recyclables into a backpack and biked up a steep hill to go to the city recycling center. After all that effort, it was closed. Even funnier, it turned out that our campground actually had recycling.

There is so much to do near Moab that it’s hard to choose what to do.  Once the girls are a bit older there are some really neat things to explore.  While we were paying for an RV park with a pool, electricity, internet and showers we decided to take advantage and to wait to do national park exploring until we were staying elsewhere.