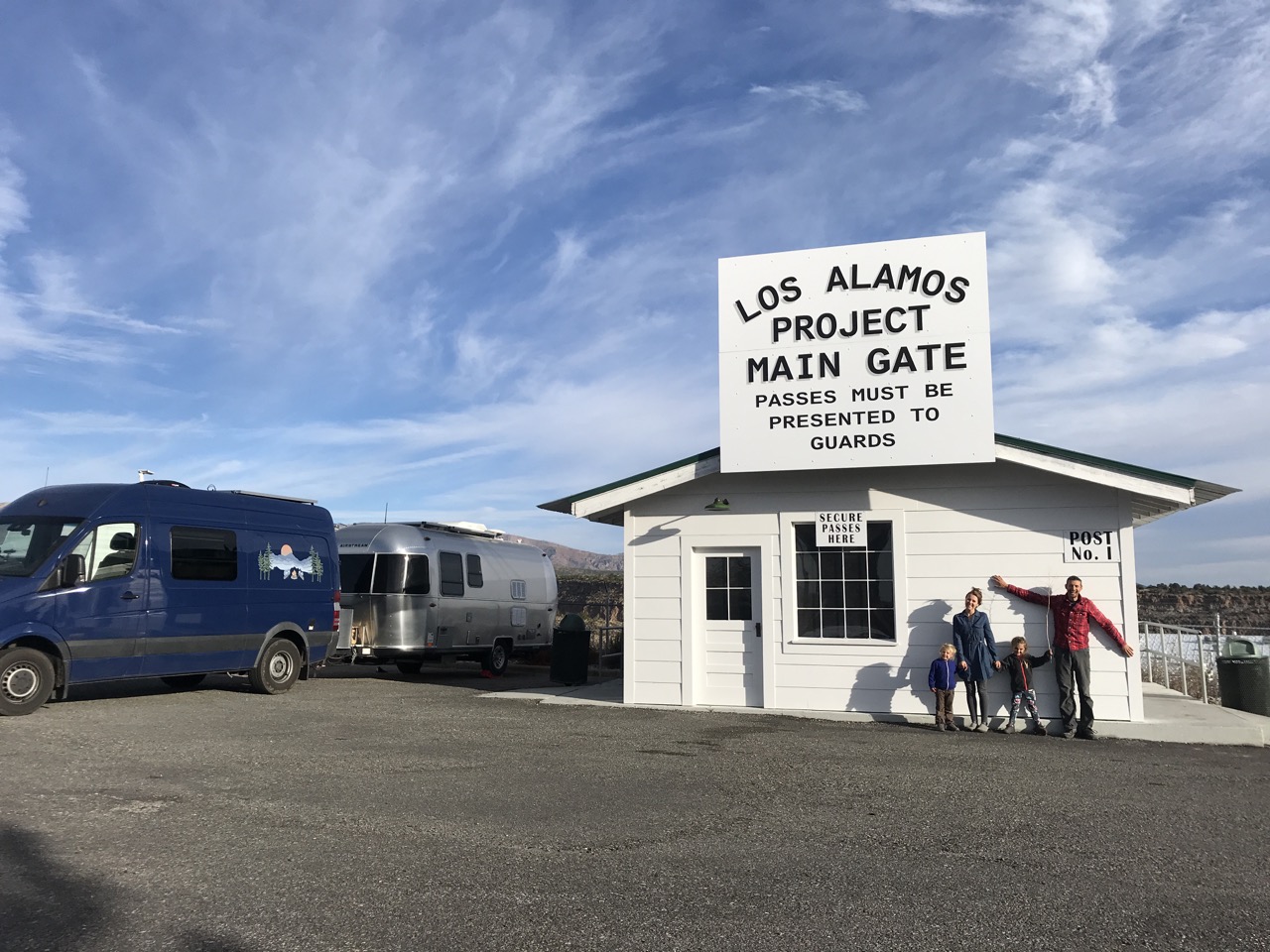 Onward we went to Los Alamos.  I had mixed feelings about visiting this place.  It was such a big part of history and there were many brilliant scientists who lived here, but history that was made here also killed hundreds of thousands.  Devastating.

We went to the Los Alamos museum to give us more information about what went on in this once secret and secure town.  It was interesting to see how many nuclear war head storage facilities there used to be and how few there are today.  We were also surprised that the locations of these storage facilities was public.  I guess they figure the information was out there anyway.  There were some interesting interactive displays but our youngest was having some issues so she and I spent most of our time there on one interactive game and then in the parking lot while she calmed down.  Not a super little kid friendly museum but interesting stuff.

Justin found a great spot to rock climb that had some easy routes for the girls to practice on.  The plan was to do schooling and head over to the rocks early to beat the sun.  However, things did not exactly go as planned.  There were many hours of tears being shed by most.  Let’s just say, homeschooling is hard, being a Mom is even harder and being on the road comes with its challenges.  Thank goodness I have a good Mom I could confide in when everything was falling apart.  This subject really deserves its own post but I’m not sure I have enough perspective on it to be meaningful yet.  To be continued.

After a very rough morning we were finally ready to head to the rock.  Justin started Azul up and started to drive away when we all felt and heard a Bump, Clomp!  Eek!!  He had just run over something, but what?!  Justin ran out to find that he had just ran over all his climbing gear!!  He was horrified and I was relieved.  I thought for sure it was a dog or some other animal.  What a morning!  Justin took out all his gear inspecting everything thoroughly.  As it turned out, luckily it was only his $60 helmet that took the brunt of the collision.  That and his new gear bag but I can patch that up no problem.  The helmet, not so much.  Though it did still fit on his head, somehow it looked a little less than safe.  Luckily he had a bike helmet he could wear to climb with that day.  And, he got a cool Halloween costume out of it!  Not a total loss.

The path that led down to the rock climb was intense in and of itself!  It was basically a scramble down the side of a cliff.  Luckily there were a search and rescue crew there training at the time when we arrived who kindly showed us the “trail.”  We never would have found it ourselves since it looked as if you were dropping down a cliff!

It was a beautiful path with such amazing rocks!  We all separately said, “This rock looks fake.”  It looked as if it were one of the molded rocks at a zoo or something with a kind of plastic-like quality.  Once we were down at the climbing wall the rock there was different but just as neat.  The climb, “Giant Killer” (a 5.4 sport climb), was straight up but on rock that was almost like a step ladder with lots of mini ledges everywhere for you to hand onto.

Unfortunately even though the climb was amazing the girls were coming off of an extremely rough morning and continued the pattern at the rock.  Both chose not to climb.  Our oldest because she wanted to have control and since rock climbing wasn’t her idea today, she wasn’t having any part of it.  Our youngest was timid and copies her older sister.  So when her older sister didn’t climb, neither did she.  Not only that they bickered to high heaven while Justin and I climbed doing such nasty things I wondered who’s children these were and where mine had gone.  It was very hard to concentrate on being safe and because of this, we decided to leave after Justin and I both climbed once.  That and the rock was getting very hot as it was in the heat of the day due to our late start.

On our way back up the cliff path we watched as the rescue crew practiced transporting someone via stretcher from a complicated pully system they had rigged up.  Neat to watch!

While Justin packed up the van, I finished sewing Kara’s (our new kitten) little fur bed.  The girls of course had to try it out first.  It passed the test with all 3 though the girls wished they had one their size as well.

We all were glad for bedtime that night.  And, on a side note, our calm kitten Kara is becoming more comfortable with us for sure, which means, not so calm anymore.  However, I have to say she’s less crazy still than any other kitten I’ve seen.

On our way out of Los Alamos we saw a sandwich board advertising a farmer’s market that day.  We had just gone grocery shopping but have really missed going to farmer’s markets so we decided to give it a try even though it was a travel day.  Justin put the location on the sign into his phone and away we went.

Pretty soon, however, the road we were on was bringing us up to a series of booths guarded by military men.  Yikes!  Where were we?  Justin pulled over just shy of the booths, got out on foot and went to ask some questions.  Here he was in the middle of a vehicle lane on foot at a booth with armed guards asking where the farmer’s market was.  Hilarious!  It looked as if he was in a drive through without a car.  I’m pretty sure they got that we were out of towners!

With new directions we were on our way again.  Thank goodness they had a turnaround at the armed guard gates!  We ended up finding the farmer’s market right next to where we were just prior to looking for it.  It was right next to the post office where we just mailed a box back home.  Ha!  We had to mail some things home due to our newest member of the family.  We will also be having to give away or sell some other things once we get back into Albuquerque.

The farmer’s market with LOVELY!!  We bought a little bit of everything and a lot of fruit.  There was this really nice older gentleman selling apples and pears from his farm.  His prices were spectacular and he was so kind and cheery.  After we bought our things he would keep saying, “I’ll just throw in a couple extra for the girls.”  By “a couple extra” he ended up giving us another full bag of apples and pears.  They were delicious!!  We also bought some jicama.  I don’t remember ever having this.  It looks like the shape of a beet (or other bulb root veggies) with the skin appearance of a potato but tastes similar to an asian pear with less sweetness and more starch.  It is absolutely delicious!!  We bought one batch and by the time we were done at the market I had bought another batch.  I hope to find more of these as we travel into Mexico!  The farmers market was such a treat and just what we needed to lift our spirits from the day before.