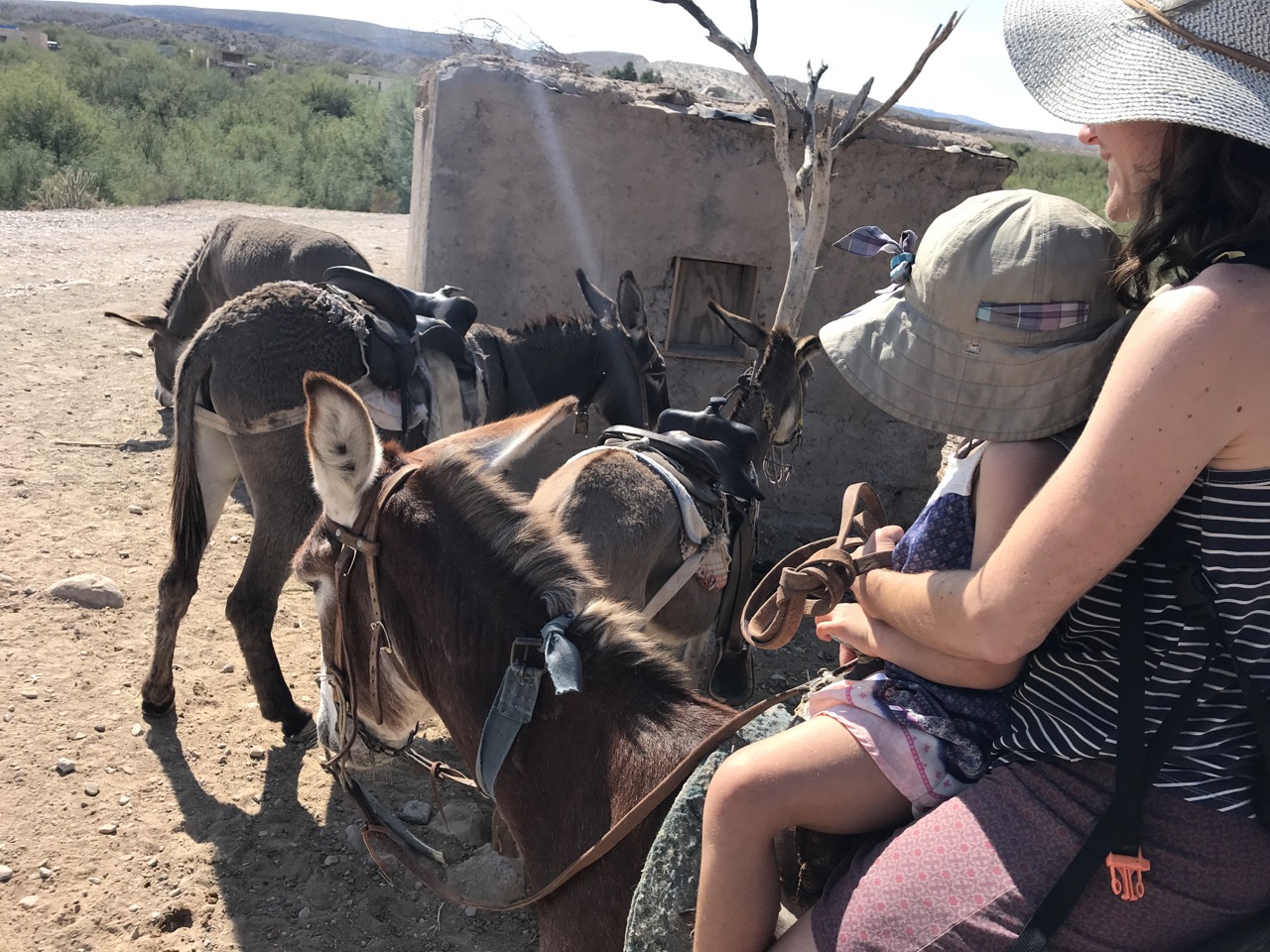 We decided it would be fun to dip into Mexico for the day since we were so close. Right across the Rio Grande from Big Bend National Park is the small Mexican village of Boquillas.

Big Bend National Park had given us the rundown on entering Mexico so we knew what was to be expected.  We first walked through the Port of Entry with rangers letting us know what was okay and not okay for us to bring back into the US.

From the Port of Entry building, a short walk took us down to the edge of the Rio Grande.

On the US side of the Rio Grande River a Mexican gentleman in a boat charged us $5 per person to paddle us across to the town of Boquillas.  Rangers said folks are welcome to cross by foot if they don’t want to pay to have someone boat you over but it isn’t suggested.  When we crossed the river was definitely moving swiftly and looked quite deep.  If I were paddling, I would have brought us downstream but this guy skillfully brought us straight across with seemingly little effort.

Once on the Mexican side of the river we were greeted by some tiny chill dogs and a large tiki hut that housed dozens of donkeys and a couple horses.  This was our next mode of transportation from the river’s edge into the town.

Another Mexican gentleman picked out two donkeys and after paying $5 per person we rode two by two into town.  The saddles were for one adult so the girls basically sat on the front of the saddle with Justin and my arms like a seatbelt.

It was a strange feeling not having much control over the burros.  They clearly knew the way and we clearly did not!  The donkeys took the lead and led us down the path with our “guide” in the rear.  I tell you, it was a bumpy ride!  Justin and I both wondered why our sit bones were so sore the next day then we remembered the burros! Haha!

When you get onto Mexican soil from your boat border crossing you are automatically assigned a “guide” who escorts you around town.  Our guide was very friendly but it was definitely a strange feeling and felt a lot less leisurely.  That being said, we wouldn’t have found some of the places if our guide hadn’t showed us where they were.

There was a woman making tortillas in her kitchen so we were able to buy some from her.  Hurray!!  Immediately the girls started munching on them.  They were lovely!

To give you some perspective about how isolated Boquillas is, they are a 4 hour 4 wheeler drive away from the nearest town in Mexico (Santa Rosa, 150 miles away). Just 6 years ago (in 2015) the town received electricity and now has a solar array that keeps the town up and running.

The people of Boquillas had what they needed and not much extra.  There were two community outhouses that we saw which was basically a hole in a seat with no door to the structure.  I imagined the town as more of a large family where many things were communal.  Their homes were rectangle structures some with windows and doors and tile floor but many without these things.  I wondered what they would be like to live in as the winds pick up and temperatures drop for the winter.

We saw that they had a school house with a small playground for the children.  Our guide said that the younger kids went to a program in the morning and then in the evenings there was a program for the older kids.  It made me curious as to their country’s requirements about schooling.  Is it required that children attend school?  Does the teacher have to meet certain criteria?  Can kids be homeschooled?  I don’t know the answers to these questions but I am interested to do more research.

The girls each picked out a little roadrunner made of wire and beads and I picked out an apron for myself.

We ate at one of the two restaurants.  It seemed like it was a community gathering place where members of the community stopped by to help here and there and to hang out to chat.  At one point our guide realized Justin was out of beer and offered to get him one.  The kitchen was a fluid environment where people came and went as they put in a helping hand.  Our server told us the three things they were making for the day; cheese enchiladas, chicken burritos or tacos de cabra.  I learned that cabra was goat meat.  Since I had never tried that before I gave it a whirl.  The server also offered to make the girls a cheese quesadilla which they took him up on.  The food was delicious!  It was $7 per plate and a decent amount of food.

As we walked around the town all the different “booths”, which were tables or clothesline set up in front of people’s homes, were all the same.  Almost everybody sold wire sculptures, hand embroidered aprons, embroidered “squares” and embroidered round circles to hang on a wall.

After we had gone back to the US side we pondered why this was that all booths were essentially the same, usually all the same embroidered patterns even.  We think probably it is a community working together as a team rather than trying to outdo one another with different items.  For such a small community cut off from most of the rest of their country they must work as a community well.  Maybe they pool their money together?  Who knows but it was interesting to be an outsider and wonder.  Our guide said he had lived there all his life and expected his 8 and 10 year old boys to do the same.

Out of dinero (money) and melting from the heat we took our donkeys back to the boat crossing where we went back through the border check.

It was a funny system on the way back in to the US that I had never seen before.  We were greeted by a ranger officer who led us over to two little kiosks that apparently took the place of border patrol officers.  We inserted our passport into the machine reader and waited for the phone on the kiosk to ring.  On the other end was a border patrol officer from El Paso looking at our faces through the giant camera that was on us.  They greeted me and said I was okay to go and hung up.  To Justin the officer questioned what he bought while in Mexico then gave him the okay as well.  We did the process for the girls and they passed them through the same no hassle way.  The ranger told us it was a lot cheaper for border patrol to remotely allow people to pass through rather than paying someone to always be at the border in Big Bend.