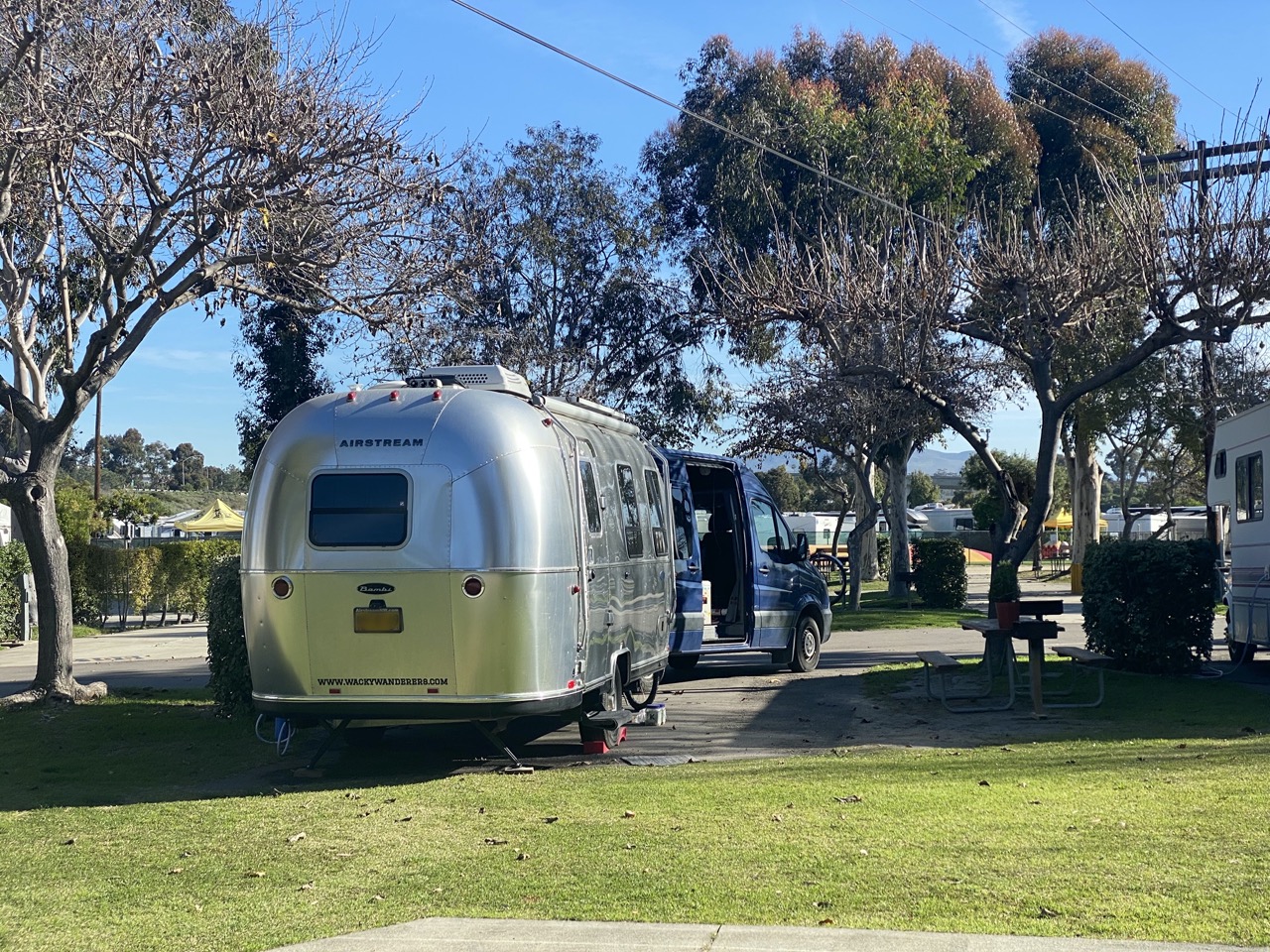 Off we went to San Diego traveling through mountains, that were basically a giant pile of large boulders, and through fields of wind mills.  And then, before we knew it, we saw grass!!  Not turf or grass that somebody had watered but real wild grasses by the edges of the road!  How good it felt to see green!!  Pretty soon we started seeing full grown tall trees as well.  Yahoo!

We decided instead of extending our stay in the Yuma area to use their pool for longer (we were really done with that area) we would stay at the San Diego KOA for 4 days which also had a pool and hot tub.  Of course one night here cost the same as 3 nights at the last RV Park we were at ($60/nt vs. $20) but it was also within walking distance to a lot of different things and we were itching to explore!

The KOA is huge for sure and fancy with a new lagoon pool.  This pool looks lovely but, Ooo, it was cold!  I’m sure it is heated a little bit but let me tell you, it doesn’t feel like it when you get in (or when you feel it with your hand for that matter).  It didn’t help that San Diego was about 10* cooler than Yuma.  Don’t get me wrong, it was beautiful 70* weather but it wasn’t urging us to jump in a chilly pool.  Justin got the privilege of swimming with our oldest on the first day while our little one and I took a break from the chlorine.  I then got in later in our stay.  Brr!  I’m not sure why but it seems like the older we get, the more Justin and I dislike cold water.  Eh, who am I kidding.  I’ve never like cold water! Ha! On our last day at the pool we all took part in the torture of swimming in the cold.  After we got in, if we constantly were swimming vigorously it wasn’t bad.

Another perk to the KOA was that they had front loaders in their laundry room which was much appreciated.  Our little one was able to enjoy the giant bouncy “pillows” that they included in the price of our stay.  It was basically a firm bouncy house bubble built into the ground.

I just had to add this to one of my posts.  While on the road there are some of our Portland daily or weekly routines that we miss dearly. However, there are some new routines that we have established on the road that are so sweet and will miss.  Since we are all living in such tight quarters if one of us is awake and moving around, we all wake up.  Therefore when my oldest wakes up (she’s most often the first to wake) she crawls into bed with me and we quietly read to each other from the Kindle.  She usually first reads to me and then I read to her as we snuggle forehead to forehead deep in my covers.  When our youngest wakes she then grabs Bun Bun (her favorite bunny stuffed animal) and crawls into bed with me as well.  She lays on top of me, head on my chest as I continue to read our chapter book from the Kindle.  We usually do this until one of us is bursting with pee, which is usually me.  It is just such a sweet and snuggly time that I will miss if we lose it at home.  Such a nice start to a day!

Part of the reason why we chose to stay at this campground was because of it’s central location to some of the attractions we wanted to check out while in San Diego.  One of these attractions was the science museum.

The museum was great!  It had a lot of interactive brain teasers and optical illusions for us to play with.  Their creative work lab also gave us a lot of ideas of things to build within our own home using recycling materials.  So much creativity in there!

The girls had a blast with a wind and tornado machine, Justin built an arch and we were mesmerized by a giant mousetrap type of a machine that circulated pool balls.

They also had a little kiddo’s area where the girls played store and played some educational games on the computers.

But, by far our favorite part of the museum was the exhibit ironically brought in by Portland’s very own OMSI!  We love OMSI!  It was actually because of our pass to OMSI that we were able to get into the museum for free in the first place.  🙂 The exhibit was called the Mindbender Mansion.  It was basically like an escape room for kids and/or families.  How cool is that?!?!  It was challenging for sure, but we did it!  It included going into different “rooms” of a house and solving various puzzles to then bring into the next room with clues.

At the end the girls were awarded the honor of being a member of the Mindbender Society and had an award printed up for them with their faces on it.

It was an absolute blast!  We missed lunch by 2 hours because we were having so much fun with it.  We all participated in completing the puzzles so it was a great team effort.  There was one particularly funny challenge that had us all doubled over laughing after our mad panic.  They had us filling lunch trays on a conveyor belt.  We organized all our food before hitting the start key and thought we were pretty clever having completed that challenge fairly easily.  What we didn’t anticipate happening was that we needed to fill more than we had the prepared food for.  The food from the completed trays were dumped back into a bucket all in a jumble and we had to fish them out and try to quickly scramble to get the food in the correct order on the trays before our time ran out!  It was a frantic, hilarious mess but we made it!  What a blast!

We were also the only ones in the whole experience for most of the time which made it even more fun.  If you ever see this traveling exhibit, take part!

One day we checked out the discovery center which was kind of like a zoo and aquarium all rolled into one on a small scale.  They are undergoing a lot of construction right now and I’m guessing due to that the parking situation is a bit unclear.  Upon entering the driveway leading to the center we saw a parking lot to our right but saw that the center was still very far from us.  We figured there must be a parking lot closer and the lot we had seen must be an overflow lot as there were only 3-4 cars in it.  We drove along the narrow one lane road until we reached the discovery center only to find that the parking lot a mile back WAS the lot we were supposed to park in!  Apparently there was a shuttle that periodically took trips from the parking lot to the discovery center.  The girls had fun on the shuttle when it picked us up.

We were greeted by a sweet sea turtle who waved at the girls.

Inside there were so many different kinds of fish, crabs, jellyfish and more!  They had some of the best camouflaged and creepy looking crabs I had ever seen.

They even had an area where you could touch the rays and small sharks and handle the screw-like egg cases of the horn shark.  The material that the egg case is made of is similar to our fingernails or hair. It felt leathery and rigid.  The case forms around a fertilized egg in the mother in the shell gland.  The embryo then feeds off a yolk sack within for about 10 months, similar to a birds egg, and then hatches and fends for itself. Sharks in captivity, such as the ones at the Discovery Center, have been observed to produce 2-3 unfertilized egg cases per week when kept away from males.  Pretty interesting, right?

The center also had a really neat area of birds.  The Black Necked Stilt Bird was my favorite.  It has the longest legs of any bird in proportion to its body.  The sweet thing is so delicate and small.  We also learned about a bird I had never heard of before; the Ridgway Rail.  They are an endangered species that lives within the dense wetlands habitat in CA.  They are endangered due to wetland loss.  In an effort to help protect these birds the Discovery Center created little artificial nest platforms that rise and fall with the tide and allow the birds a good hiding place from predators.  These are monitored and maintained.  The presence of the Ridgway Rail in the wild is a good indicator that the area has a healthy salt marsh ecosystem.  A fun fact is that these birds have a special salt gland that allows them to drink salt water.  Anyway, fun place to visit for the afternoon on a sunny day.