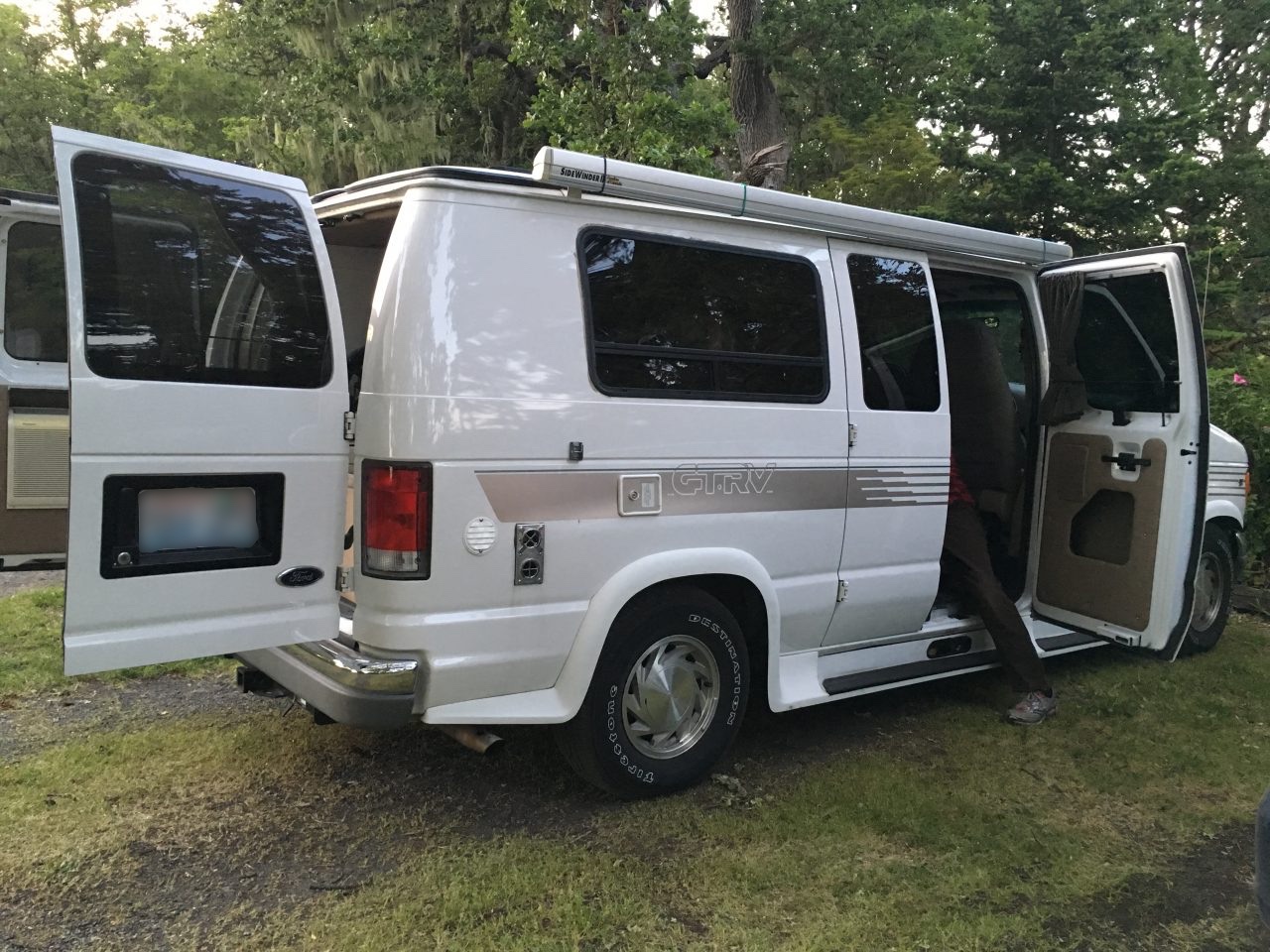 When Sarah and I got married, for our honeymoon we did a 3 week road trip to many of the western national parks.  We considered tent camping, but since it was our honeymoon we splurged and bought a camper van.  The van was a 2001 Ford Econoline cargo van that had been lovingly converted to a camper by its former owner, a man named Vince who we met when we responded to his Craigslist ad.  On the outside the van looked like a generic plain white cargo van.  On the inside was a simple yet very functional camper. 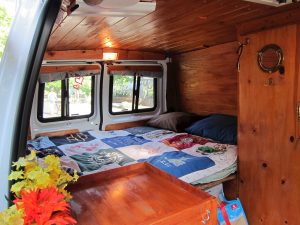 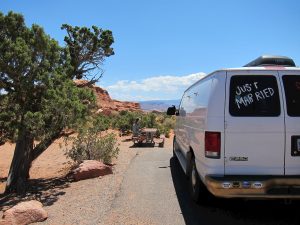 It didn’t have any bells and whistles.  It didn’t have a heater (aside from the one provided by the van while driving), it didn’t have a stove, microwave, refrigerator, or toilet.  There was no plumbing, aside from jug of water hung by a string with a Tupperware tub underneath, forming a basic sink.  In the back it had two benches that converted into a bed.  The interior was made of beautiful warm yellowed pine wood, which made it feel much like the cabin of a small boat (and in-fact Vince and his wife had decorated with nautical themed fabrics).

Our honeymoon trip was amazing, and although I had always been a hard-core RV hater (“the point of camping is to get away from things.  Why would I want to essentially bring my house with me??”), traveling in the camper van definitely made me have a change of heart.  The convenience of being able to camp just about anywhere (e.g. pull-offs in national forest land) made adventuring (without needing to pre-book camping reservations) so much easier.

When we had our first child we still had this van and took it on a few family camping trips.  We added a third seat that we got at the junk yard and bolted through the floor. Since there was only one bed, K slept in a portable baby hammock that we put in the center aisle.  When we had our second child we just couldn’t make it work anymore, so with a lot of angst (and tears) we let the van go and went back to tent camping.

For the first couple of years of having 2 children our camping attempts were not hugely successful.  Sleep was just too fragile still for us, and the nighttime campground noise and the late setting sun beaming through the thin tent walls just didn’t help.  However, when our youngest turned 2 our camping trips started having some success.  Still, we yearned for the comforts of our old camper van, which had allowed us to enjoy camping even in the colder rainier months of the Pacific Northwest.  If only we could find a van small enough to fit in our city driveway that could also sleep 4 people!

Doing the research, I quickly learned that this particular niche is one that is largely ignored by camper manufacturers in the US (Europe is another story!).  We even went to one of those big RV shows at the convention center but found nothing that fit the description.  There’s a reason that people with our particular wants flock to the old VW pop-top camper vans: there’s little else out there that provides functional space for 4 in a small package.

There are too big problems with VW camper vans (i.e the Westfalia Vanagan or the Winnebago Eurovan): they are old, and they are expensive.  When I checked, a low mileage Eurovan in nice condition was running for $40k on Craigslist!  Even with several hundred thousand miles, they were often over ten grand.  After a bit more research, I found a company called GTRV that has been converting vans using a layout almost identical to the Eurovan.  New, their vans are equal or more expensive than an old VW camper ($30k+ for the conversion, you provide the van).  However, since the GTRV brand doesn’t have the same cult following as the VWs, the used models are much more reasonably priced.

We set up some Craigslist emails notifications so we would be notified whenever the word ‘GTRV’ appeared in a listing near us.  The first one that went up for sale we almost bought.  We went as far as getting a cashiers check from the bank made out to the seller, but hours before leaving to pick it up he backed out and decided he just couldn’t part with the van!  The second time the alert went off, we were visiting friends on San Juan island off of the Washington coast.  I wasn’t going to miss this one, so I called the seller (he said I called about 5 minutes after he listed it), and booked the first morning ferry the next day off the island to make the 3 hour drive to pick up the van.

Just like the VW pop-top vans, the GTRV has a roof that folds upwards to reveal what is essentially a hard-topped tent on the roof of the van.  From inside, one can climb up to the top tent to access the twin bed.  Downstairs, the rear bench seat folds down to a full size bed.  This van has all the bells and whistles— a propane stove and furnace, a refrigerator, a sink with running water (with a fresh water tank, grey water tank, and pump), a microwave, an air conditioner, and a portable toilet.  Since the refrigerator relies on a set of house batteries at the back of the van, I added solar panels to the roof to keep the batteries topped off.  The van is by no means new (it’s a 2000 Ford Econoline with 118,000 miles on it) — however, at $13,500 (plus about $500 for the solar) it was approximately half the cost that a similar condition VW would have been. 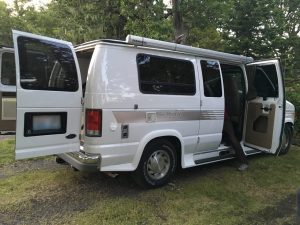 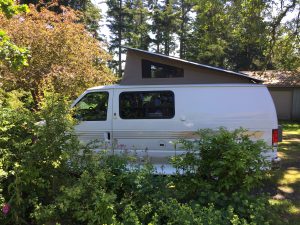 We’ve had a handful of great camping trips in the van.  At campgrounds we’re able to close the curtains to block out light and sound (although in the top bed, with only tent walls, campground noises can still be a problem).  Our best trip was a 5 day off-grid trip in Mt. Hood National Forest with our good friends who also have 2 young kids.  Our small 10-gallon fresh water tank did run out on day 4, but we were able to filter water from a nearby stream to make it through the last day.

Our longest trip was a 7 day winter trip out to central Oregon (Bend area.)  The trip was great, but the space did begin to feel a bit small after a week of being cooped up inside with two high-energy kids (they went in and out, but they could only stay outside in the cold for so long before they needed to come inside and warm up.)  Perhaps in the warmer months longer trips would be comfortable in the van with the 4 of us, but at-least in the winter a week seems to be about our limit for comfortable travel in the van.

For a family with one or two children looking to get outside more while having a few more comforts than tent camping affords, I would highly recommend a GTRV as an alternative to a VW pop-top!