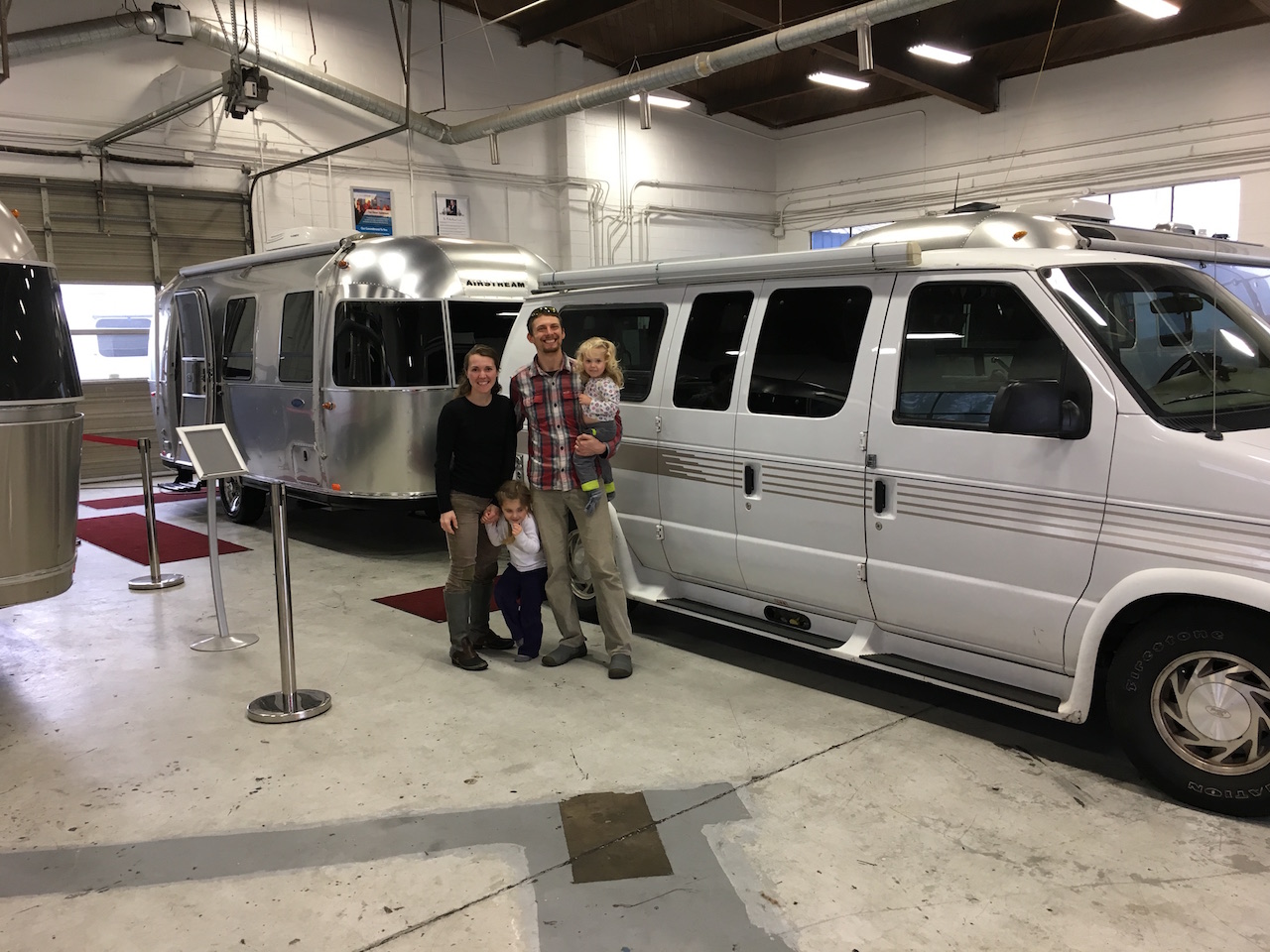 When I first proposed to Sarah that I quit my job to travel by RV for 6+ months, she was naturally a bit nervous.  It didn’t take long, however, for her to come around and realize the opportunity we had.  From the day that Sarah said “ok, let’s do this”, it was only a few weeks later that we found ourselves towing home a new Airstream camping trailer.  Let me tell you about how we made the decision.

First of all, we knew that the GTRV Camper Van, while an awesome camper, was not enough room for us to travel with 2 kids for 6 months.  There are definitely families out there that make “Van Life” work with kids, but for us we were going to need a little more space in order to keep our sanity.

We considered the tradeoffs between motorhomes and travel trailers.  Our preference was to travel slowly– driving a few hours, then setting up a “base camp” for a few days or a week to explore a new area.  We wanted to be able to set up camp and leave it set up, so we knew that if we chose a motorhome we would need to tow a small car, and we didn’t love that idea.  From a maneuverability point of view, a vehicle towing a small trailer was preferable to us compared to a motorhome towing a car.

Another big consideration for us was depreciation.  Although we’ve roughly planned out the next year, we still don’t know whether this is a long-term lifestyle change or not.  Therefore, we want to minimize the amount of money lost if in a year or two we decide to sell the camper.  Travel trailers, in general, depreciate far more slowly than motorhomes since they aren’t bound to the limited mileage lifetime of an automobile.  Airstreams, even more so, tend to hold their value as they are built well and last forever (the company says that 65 percent of all Airstreams ever made, dating back to the 1930s, are still on the road today!)

Lastly, the aesthetics was important to us.  If we’re going to leave our home in Portland (which we love!) for an extended period of time, then we want to love our new home on the road.  I tried to make myself like the cheaper alternatives, but there just wasn’t anything out there as sleek and classic as an Airstream.

Once our minds were set on an Airstream, we had to narrow in on a particular Airstream model.  In particular, selecting the length of the trailer was an important first step.  Current model Airstream trailers range from 16′ to 33′ long.  In general, the obvious tradeoffs when selecting lengths are:

We decided we wanted to try to get the smallest trailer that we could all still be comfortable in.  After our first trip to the Airstream dealer, we were feeling that a 25′ trailer would work for us.  However, there were two things still really bothering us.

First, a 25′ trailer would be too long to fit in our driveway (which is about 23′ long).  Since the City of Portland doesn’t allow for RVs to be stored on the street, we’d be forced to find storage space for the trailer whenever we’re home.  Not necessarily a deal breaker, but it would be an extra hassle and cost.

Second, we were really struggling with the idea of letting our GTRV Camper Van go.  We love the van, it’s perfect for shorter trips, and we’ve done a lot of work to make it just right for us.  If we bought a pickup truck to tow the Airstream, we’d need to let the GTRV go, as it wouldn’t make sense or be financially wise for us to own 3 vehicles (our other vehicle is our trusty Honda Fit).

In a moment of inspiration, a plan materialized– if we could get an Airstream short enough to fit in the driveway, and light enough for the GTRV to tow, we could alleviate both of these concerns!  Further, having the van as our tow vehicle would increase our storage and living space and allow us to live more comfortably in a smaller trailer (the van would essentially give us another ‘room’).  Looking at the specs for the our van, and considering the weight of the camper conversion (after weighing in at the local transfer station), I determined that the van could tow about 4500 lbs and handle about a 500 lb tongue weight.

With these new constraints (shorter than 23′ and 4500 lbs. or less fully loaded), our selection was reduced to two current model Airstreams– the Sport 16′ or the Sport 22′– and we immediately eliminated the Sport 16′ as too small, without even seeing it.  The Sport 22′ is 3500 lbs. empty and 4500 lbs. max.  Of course, we really didn’t want to buy a new Airstream, we wanted to buy a used one.  However, I could find only a small handful of Sport 22’s across the whole US, and the ones I did find were barely cheaper than the new MSRP price.  I poured through specs of older model shorter-length Airstreams, such as the Safari 22, but most were heavier than the Sport 22 (often due to having 2 axles instead of 1).  In the end, we bit the bullet and walked home with a new 2018 Airstream Sport 22.

Some things particular to the Sport 22 that we really love:

A few things that we don’t love:

We’ve affectionately named our new Airstream “Wobbles”, since it wobbles on behind us on it’s single axle.  The name is a bit ironic however, as it turns out the trailer is very stable while towing, despite having only 2 wheels.  I’ve never towed anything besides a small utility trailer, and I was a bit nervous about the idea, but so far towing this trailer has been far easier than I expected (backing up is another story– I’m still working on that!)