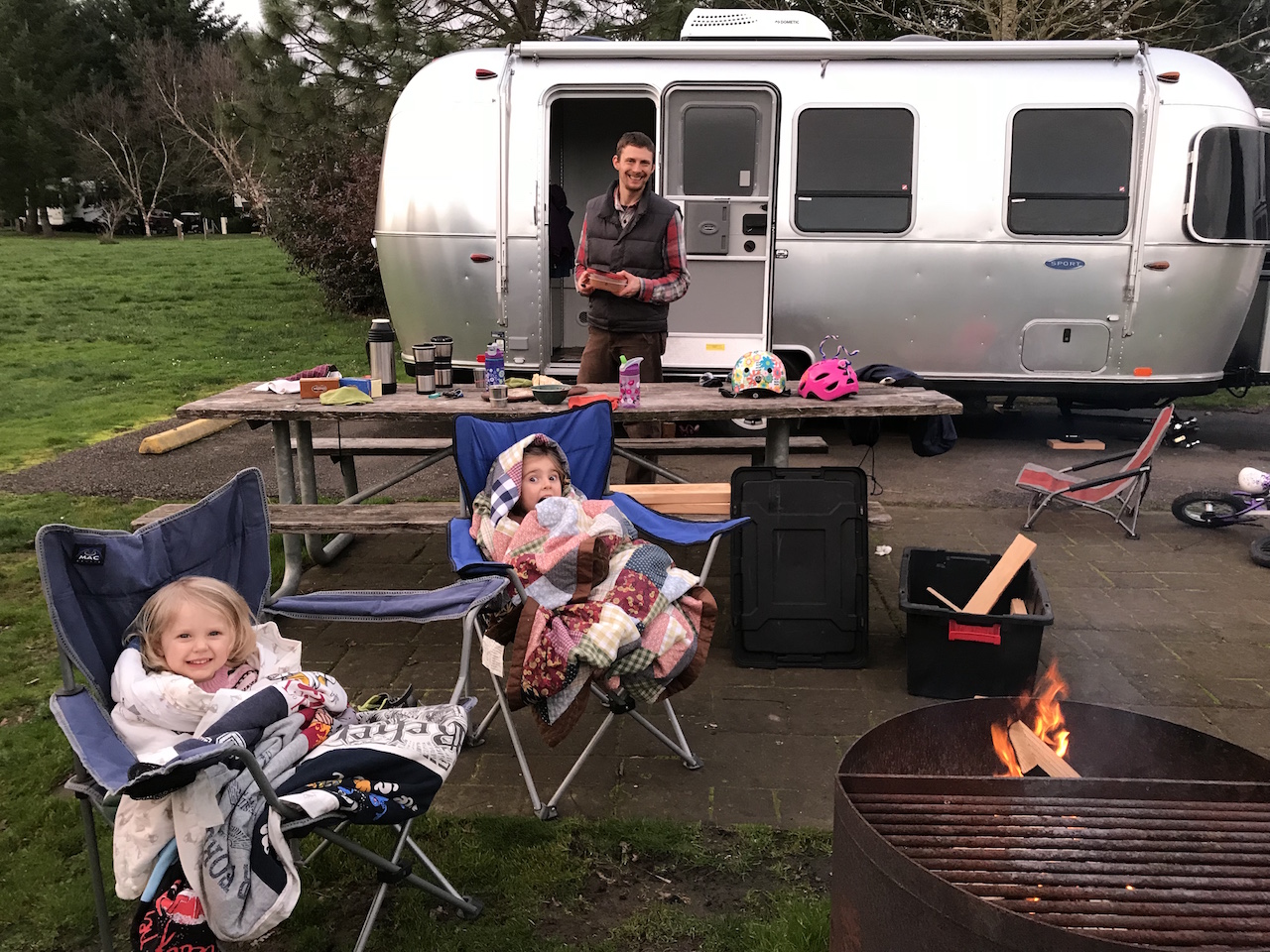 Our first trip in Wobbles was a one night weekend trip to Champoeg State Park, just to try things out.  The trip was great, we found a few warranty issues with the trailer, and we learned a lot.

We had a number of areas where we wanted to try things out on the first trip:

Sarah loves to bake, and one trade-off we made in buying the Sport 22 Airstream is that it doesn’t have a propane oven, only a small microwave/convection oven.  We knew that this meant that Sarah wouldn’t be able to bake when we are away from an electrical hookup, but we also weren’t sure how well baking would work at all in the convection oven.  Therefore, Sarah wanted to try two experiments during our first camping trip:

Additionally, I wanted to try making our favorite snack, popcorn, on the propane stove.

We brought a cast iron dutch oven, which we used both to pop the popcorn and also to cook the bread in the convection oven.  We also brought a round glass Pyrex dish which Sarah used to bake the cookies.  It took about twice as long to bake in the convection oven compared to a traditional oven, but overall our food experiments all turned out quite well!

There was one minor issue, which was that in order to use the propane stove we needed to ventilate or else the whole trailer smelled of propane (the Sport doesn’t have a vent hood, so the Fantastic Fan on the ceiling is the exhaust).  When it’s freezing outside and we’re burning propane to heat the camper, it feels a little sad to have to open windows … but it did the job.

We weren’t sure whether giving the girls baths in the Airstream would be practical or not, so we wanted to make sure we gave it a try on this first trip.  We brought along our small kiddy tub and put it in the shower.  Our GTRV only has cold water, so having hot water while camping was quite the treat!  The bath time experiment was another success.  When the weather turns warm, we’ll have to try outdoor bath time! 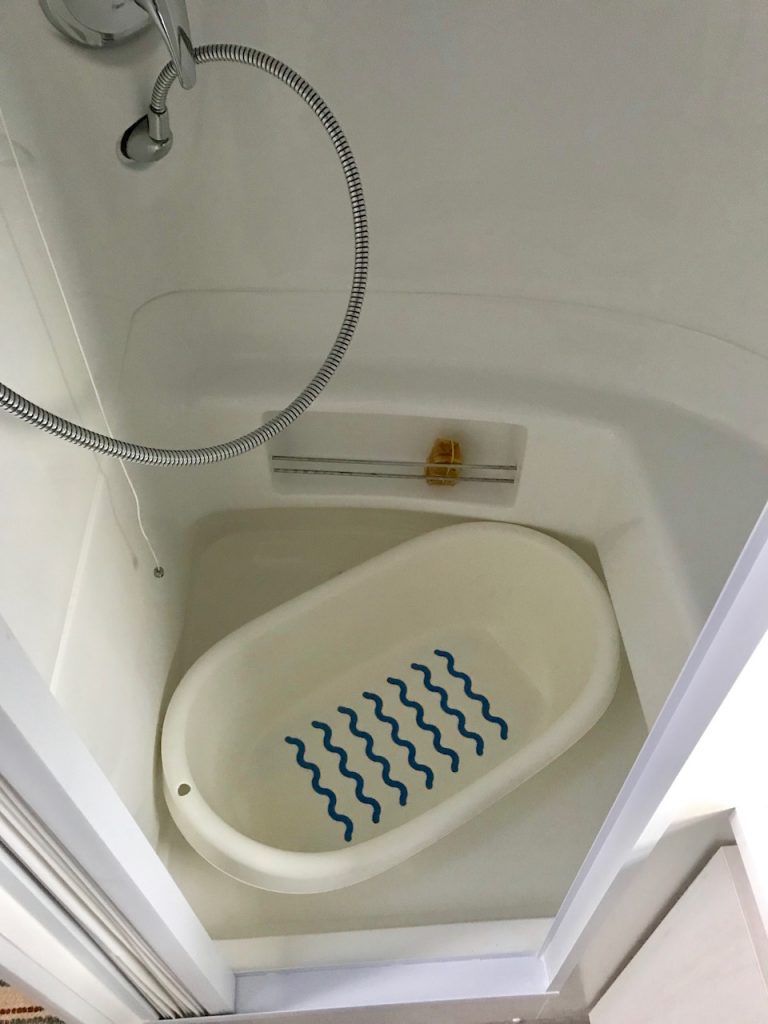 We weren’t too concerned about showering (for Sarah and I), as we figured it would work one way or another, but we definitely both wanted to give it a try on our first night out.  Overall showering worked well, but there were 2 issues:

Ok– we actually didn’t test out movie time on our first weekend trip– we tried it out on the side of the road next to our house the first night we brought home the camper!  We don’t let the girls watch a lot of TV.. and in my previous life as a person without kids, I would have been sickened by the idea of watching movies while camping.  However, I’ve come to accept that sometimes, as a parent, a little help from Walt Disney can give some much needed down time!  Movie snuggle time in the camper worked lovely– although we did discover that the connection between the DVD player and TV was distorted (warranty issue #2). 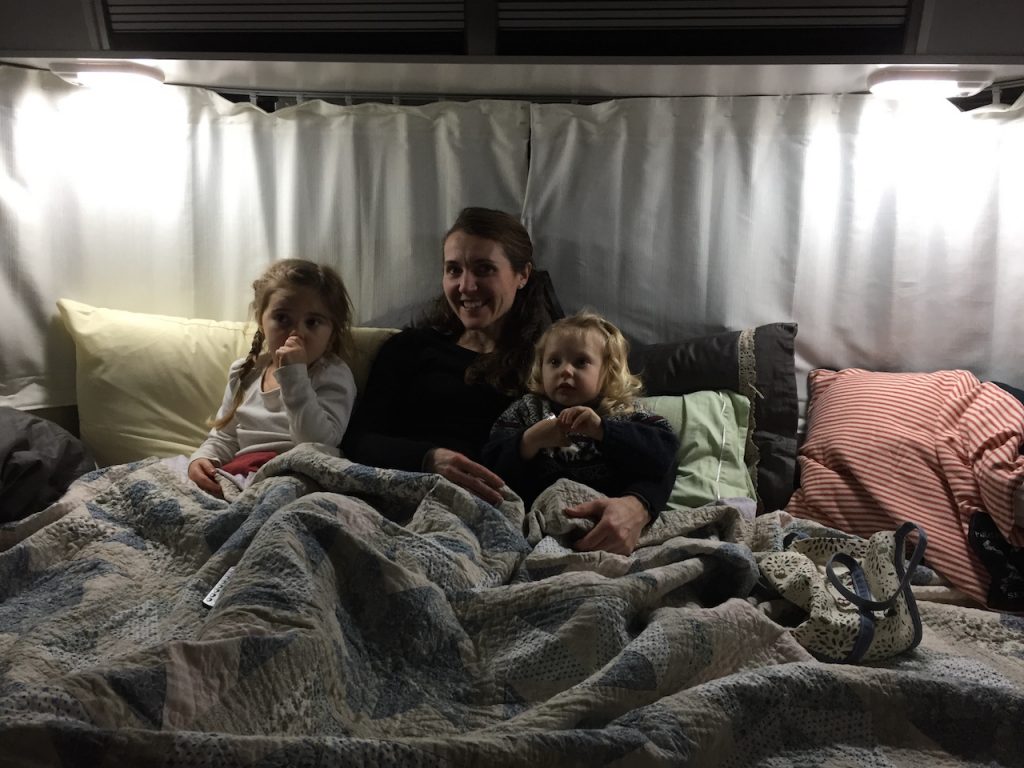 Our kids are much better sleepers now that they are 2 and 4 years old than they were at younger ages.  Still, we were worried about how difficult it might be to get them to go to sleep in the camper.  At home they share a bedroom, but in the camper they will share a bed!  They also don’t have the same bed time, so we had to see if we could get kid #2 asleep without waking up kid #1.

Fortunately, we had a trick up our sleeves for this maneuver.  While Sarah was putting kid #1 to sleep in Wobbles, I was reading books to kid #2 in the van.  When kid #1 was fully asleep, I brought kid #2 over to the camper and laid down with her until she was asleep.  It worked perfectly.

The kids slept great– the problem was actually Sarah and I!  Since we were so nervous about how the kids would sleep, we gave them the real bed (since it is at the far end of the camper and can be sectioned off with a curtain). 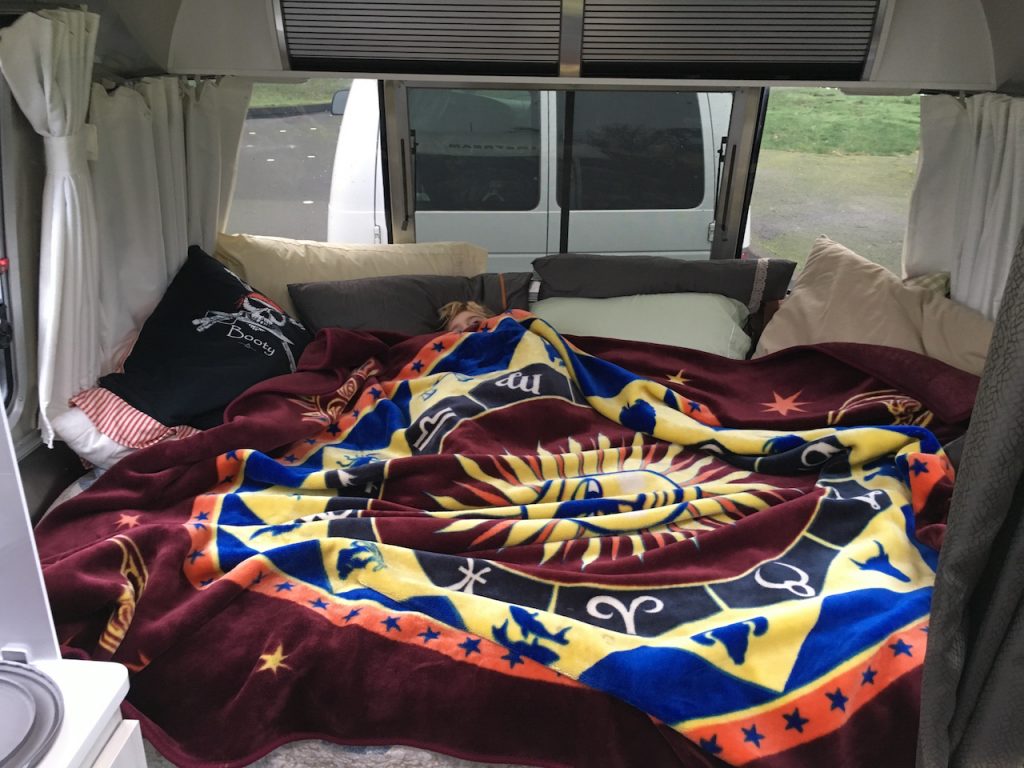 Sarah and I took the twin-sized dinette “bed”.  We knew the bed would be small, and we were OK with that– however, there were two issues:

Lastly, the main door was so hard to close that it was not possible to close it from the inside without slamming it (warranty issue #3).  We weren’t going to do that with the kids asleep, so we just left the door partially open all night.

We had never used a camper toilet before, so we were excited to try it out!  In particular, we wanted to know if the kids would be able to use it on their own.  While our 2 year old needed a boost to get up on the potty, our 4 year old was able to use it (and flush it) herself, with the aid of a step-stool.  And they were both able to reach the bathroom sink.  Another win!

The first time I used the bathroom and closed the door, I had quite the surprise when I couldn’t get it!  The door could be opened from the outside, but not the inside of the bathroom (warranty issue #4)!

I had never dumped RV tanks before, so I was a little excited/nervous!  It turned out to not be so bad (I even had a great audience).   I did make the mistake of taking the sewer hose out of the drain prior to spraying it out with the hose.  The result was a spray of water through the sewer hose onto my pants/shoes!

So our list of warranty issues, coming out of the first weekend, were:

All but the shower head switch were quickly fixed by the dealer under warranty.  The leaky shower head is apparently just how it is (they put a new one on, but the new one behaved the same).  Perhaps we’ll replace the shower head with a different one in the future.

Aside from the minor issues above, all the other functions of the trailer worked well.

The weather was in the 40s and somewhat rainy during our inaugural trip, however, and we quickly discovered the problem of condensation.  With the furnace on, the inside of the trailer stayed nice and toasty, but in the morning when we woke up, the inside of the windows were dripping wet, and puddles had formed at the bottom of the windows.  When we got home I researched a lot about dealing with moisture in RVs, which I’ll post more info about soon.

Despite not sleeping very well, we went home from our first weekend trip feeling excited about future travels (and hopeful that we’d be able to make our bed more comfortable!)