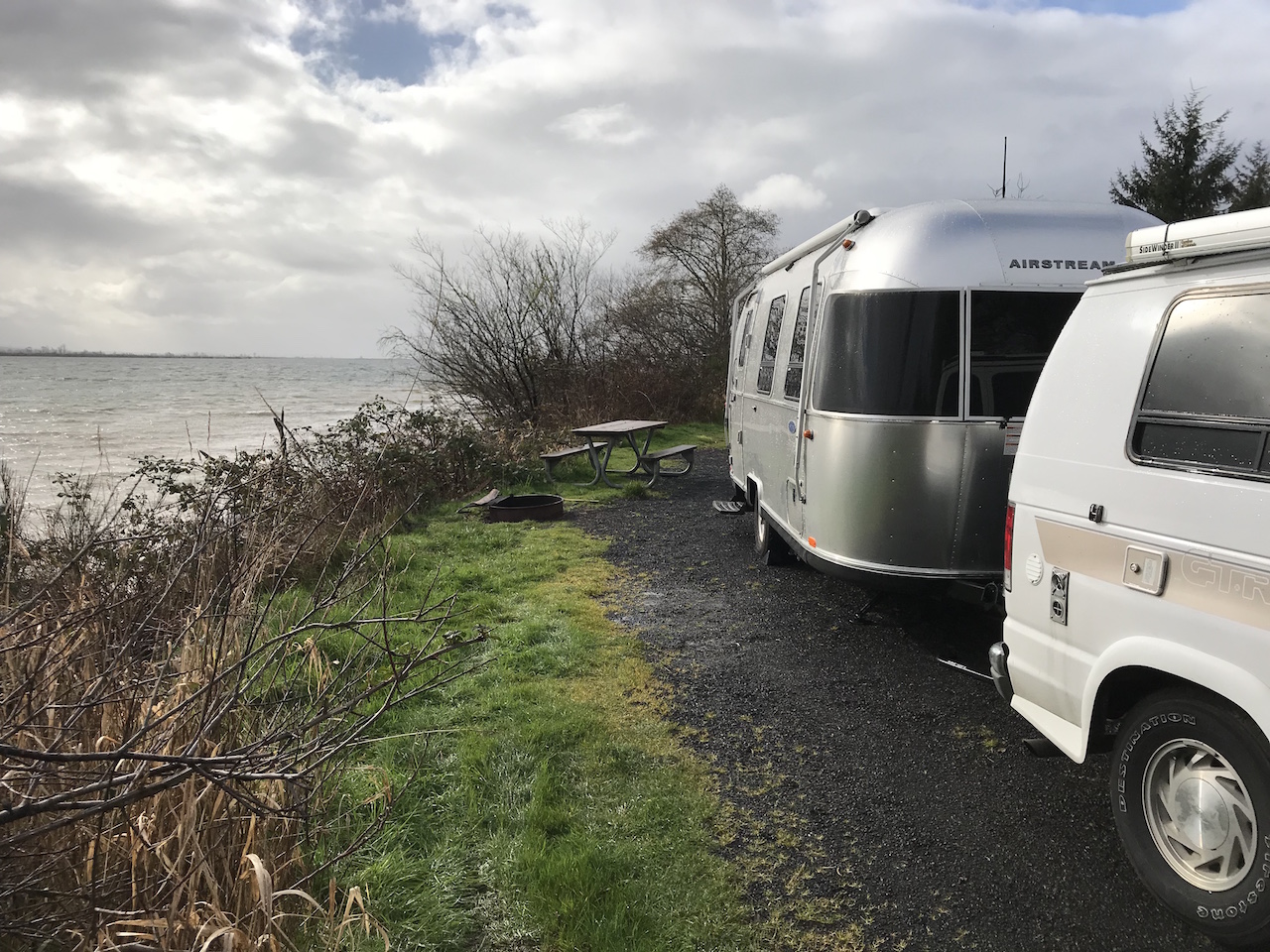 After completing a weekend trip in the Airstream, we bought some things that we realized we were missing, re-packed, and then headed off on a one week trip to the coast.

Our plan was to slowly make our way from Portland up to Cape Disappointment State Park via Washington, and then cross the Astoria-Megler Bridge back into Oregon, go down the coast a bit and then head back inland to Portland.

Except a few times in our old Honeymoon Van, we’ve rarely stayed at RV parks, instead camping mostly at State, Federal and National parks.  So for this trip, we wanted to make sure to include a few RV parks, just to get a feel for them.  And so, for the first night of the trip we camped at Vista Park RV park in Skamokawa, WA, right along the Columbia river.

Since we were traveling during the off-season, we were able to get the best site, right on the Columbia river.  While Vista Park was essentially just a big open field with RV parking spots, in our spot we were separate enough that it felt private.  Despite worst-possible weather (near freezing temperature, on-and-off hail storms), we had a good time.  Whenever ice balls weren’t falling from the sky we explored outside, and whenever we started getting pelted we raced back to the camper.

If we were at home in this weather we would have likely been hunkered down inside, but with the small space of the camper staying inside all day wasn’t really an option (not with energetic young ones!)  This extra encouragement to get outside, despite the hassle of putting on and taking off rain gear all day, is something I really appreciated.  Once we were outside, we all had a fine time– even at 6 in the morning when it was still dark out and raining.

With a name like Cape Disappointment, we weren’t sure what to expect.  Let me tell you, it definitely did not disappoint.

We’d camped at Fort Stevens before, but since it was on the way home from Cape Disappointment we figured we’d break up the drive by camping here.  This time of year, we had the campground mostly to ourselves (and got a prime spot right next to the playground).  However, when we’ve been here in the summer it’s been crowded and loud (the sites are right on-top of each other).  Unlike many other Oregon coastal campgrounds, Fort Stevens isn’t right on the beach, so it’s a bit of a longer walk (~30 minutes) to get to the beach.  If you like exploring old forts it’s worth a visit, but it’s our least favorite Oregon coast campground we’ve visited so far.

Our last night on the trip was spent here.  We wanted to experience an RV park that had “Resort” in the name.  The kids loved having a pool/hot tub, and the location right next to Canon Beach can’t be beat.  We prefer State and National parks in general, but staying at a “Resort” like this may be nice every now and then on our longer trips.