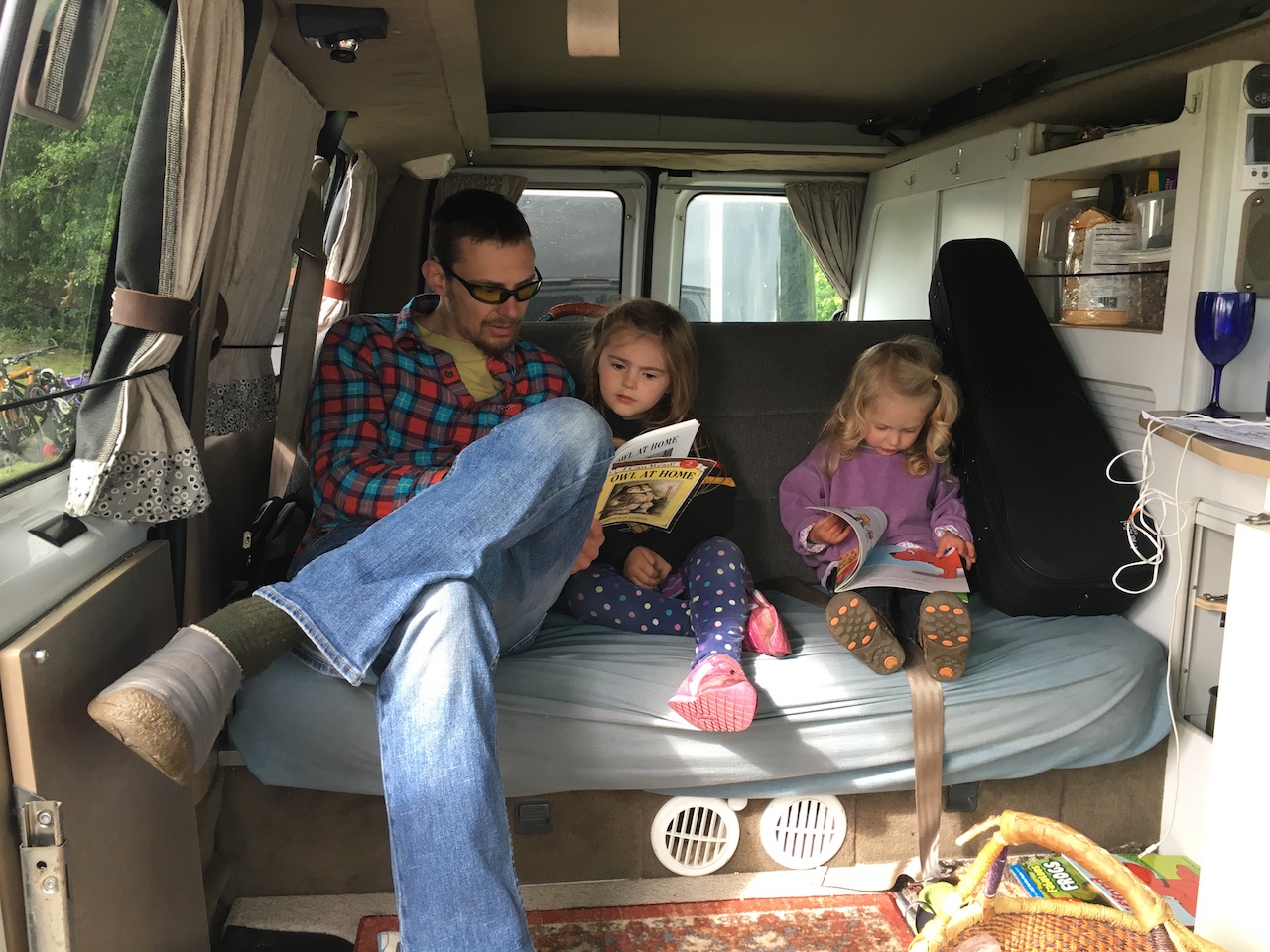 Our two-week Olympic Peninsula trip was our longest trip yet in our Airstream travel trailer with the girls.  The trip was long enough that we could start to get a bit more of a feel about what long term life on the road might be like with our young kids.  Here’s a few things that we noticed.

1. Cleanup is easier than at home

Even though we are careful at home to try to not let the kids collect too many toys, we still have a lot more things in our house for the kids to make a mess with than we do in the RV.  At home, it feels like we are constantly picking up after the girls.  Sometimes they help a little— but at 2 and 4 years old, their help isn’t always actually helpful.  It feels like there is a never-ending pile of dishes, and the living room floor is covered with toys again 15 minutes after we pick up. It’s surprising how long it takes just to distribute items in their proper places within the house.

In the RV, we have less stuff.  We have just enough dishes for the four of us to eat one meal, so there is never more dishes than a single meal’s worth to clean. We tend to wash them right away after we eat, both because it’s quick and easy and also because counter space is a precious resource in the RV.

The girls have only a couple of toys in the RV– some crafting supplies, a few play dresses, a few buckets and shovels, small instruments, silly putty (one of the favorites) and a few other things.  When these toys get pulled out of the cupboards, it takes only a few seconds to put them back away.  Best yet, the girls don’t seem to miss their things we left at home.

2. Bed time is harder than at home

Bed time has been really challenging on the road.  We’ve camped before in the Airstream earlier in the year when the days were shorter and bed time was a lot easier.  On those trips, it was dark by bed time, and stayed dark longer in the morning, so the girls could get a full night’s sleep.  Now, in mid-may, the daylight runs from 5:30am to 9:30pm– there just isn’t enough darkness for the girls to get the ~11-12 hours of sleep that their little bodies need.  If this were just a weekend trip, we might have accepted that they were just going to get a little behind on sleep and be extra crabby.  However, for 2 weeks that just doesn’t work (never-mind 6 months).

We have “blackout” curtains on all the windows in the camper– but lots of light still pours in from around the edges.  We’ve been collecting cardboard pieces that we’ve found in the recycling dumpers at the campgrounds to make extra layers of window shadings, but it’s still far from dark inside before the sun goes down (especially if we’re camped in the open– if we’re nestled in a forest it gets darker sooner).

Beyond the challenge of the sunlight, the camper is a small space– our 2 girls share the full sized dinette bed.  If one kid is refusing to go to bed or crying, then the other is awake too.  We usually resort to trying to put them to sleep one at a time– whichever we deem to be more tired goes first (that’s the 2 year old if she skipped her nap– which she’s doing more and more often– or the 4 year old if the 2 year old did get a nap).

The whole bed time process can easily take 2-3 hours to get them to sleep.  If we start at 6:30pm, we might not have them both down until 10pm.  By that time, after one of us lying with them in a darkened camper with white noise playing for 3 hours, we’re likely to be asleep too or so defeated we want to do nothing more than sleep.

3. Adult free time is not abundant

Somehow I thought that without a job, and without all the chores of home, Sarah and I would have lots of free time while we’re on the road. That’s why Sarah brought a sewing project with her. I brought a guitar to learn on, and this blog to write.

The truth is that we have less adult free time than at home. Our daytime hours are filled with meal prep and cleanup, family activities, and the rituals of camping (setting up camp, tearing down camp, putting the awning up or down, locking up bikes for the night, etc etc).

Our free nighttime hours depend on how long it takes to get the kids to bed. We’ve had 2 nights where the kids went down in about an hour, and Sarah and I had a few hours to ourselves after. However, more often than not one of us (usually Sarah) is stuck in the camper the whole evening with a girl that won’t go to sleep.

Despite having no more “free” time than when I was working and we were at home, all our waking hours are much less stressful than in our former lives, which leads me to #4.

4. We have been much more relaxed

Well, this wasn’t true the first few days of the trip. Somehow, even though we had plenty of time and no fixed schedule, we still found ourselves rushing– rushing to get meals ready, rushing to get going for the day, rushing to get the camper ready for bed time.

However, after about a week on the road we really noticed ourselves slowing down. We stopped feeling like we needed to be at a certain place at a certain time. When our youngest dumped smoothie all over her clothes, we laughed it off instead of getting upset as we might have if we had been more tense.

The first time we noticed that something had changed we were on a sandy river beach. Our youngest got her dress wet then plopped right down in the dry sand, which stuck all over her bottom and scooted down a hill. Sarah said “that’s ok, it’s only sand.” We both looked at each other and gasped– Sarah normally hated sand and would never have responded in such an easy-going manner!

5. The girls have been less fussy

At home we have two big challenges with the girls. The first challenge is being in the house. When we’re in our house, the girls can usually play nicely together for some of the morning and parts of the afternoon. However, once they start getting bored, then they’re either at each other’s throats or they are glued to our legs begging for one thing or another.

The second challenge is going anywhere. Unless the stars align, usually when we try to leave the house at-least one of the girls throws a fit about not wanting to leave (or put clothes on, shoes on, a jacket, using the bathroom, etc). It doesn’t matter that the place we are trying to go is one of their favorite places. Once we’re out of the house they usually have a great time however.

Camping has been different. The weather has been absolutely perfect so we have been outside almost all day. We eat all our meals outside too, since converting the dinette from a bed to a table is something we don’t bother with unless it’s too wet or cold out. When they’re outside all day in nature there are endless new things to discover, and they don’t seem to get bored in the same way as they do in a house. We don’t stay in one spot long enough for a place to become old hat. The girls, for the most part, have been playing together very kindly. Since we’re already outside most the day, going places is easy too. There’s no fight to get shoes on and out the door, since they’ve already done that themselves. I’m sure that our relaxed demeanor has also rubbed off on them a bit.

Overall, the experience is worth it

Despite having little “free” time, and despite the tricky bed times, the experience is definitely worth it and we are looking forward to experiencing the feeling of long-term life on the road. Likely bed time will get easier as the girls adjust to the different life style (and as our youngest gets a few months older). In just two weeks I feel like we have experienced so much! It feels like we have been traveling for months, based on the number of memories we’ve already made.