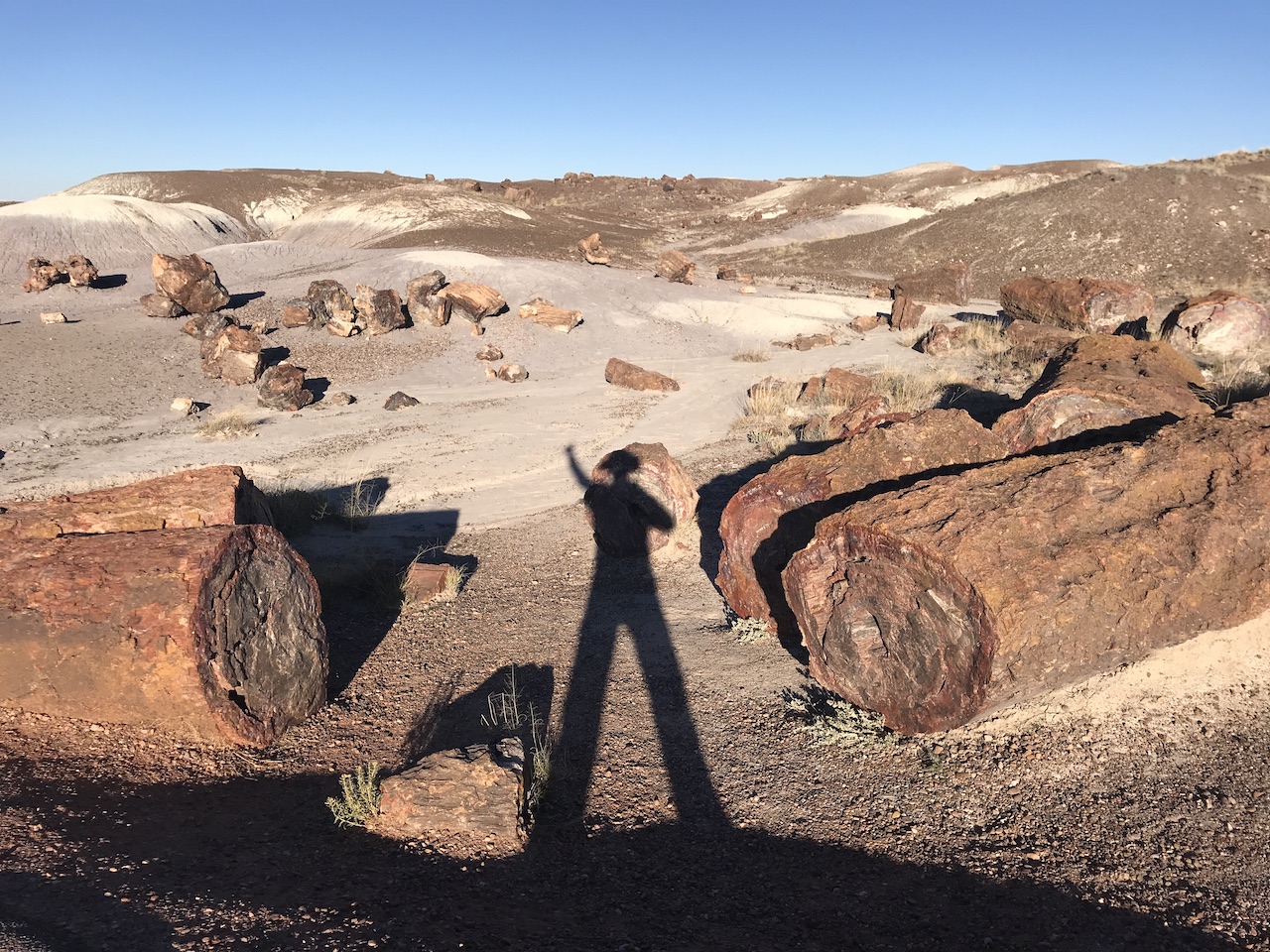 Although the landscape was not as picturesque as many National Parks, it was fascinating seeing and touching the petrified wood that was over 200 million years old!  We felt that a half day in the park was all we needed, but we’re glad we made the detour.

Soon after arriving at the Petrified Forest we realized that this was a different kind of park than many we had visited.  It seemed like more of a drive through park than a ‘go out and hike’ kind of a park.  The main attraction (the petrified wood) was visible from the road.  Granted, hiking on some trails gave you a much more in depth look at it and the variety of minerals which had colored the wood.  We had fun for sure but felt that a few hours was all we needed in the park.

We visited an old lodge/diner, the Painted Desert Inn, from the 1920’s which has been maintained, although to our disappointment was not still serving food.

Inside was some information about Rt 66 and lovely paintings.  One reason why they preserved this building was because it was along the iconic Rt 66.  The park even has an old broken down rust bucket of a truck to mark where the old Rt 66 road used to be.  Very odd if you ask me.  We experienced similar awe for the famous Rt 66 in Flagstaff later in our travels.  The sections of the route that still remained followed anything but a scenic route.  These towns must have looked worlds different back then to what they look like now.

I have to admit, the petrified logs close up were really quite amazing to see. The colors in some of the wood were phenomenal!  These logs once floated in a river during which time minerals from the water seeped into the porous wood.  This created quartz and mineral impurities within the quartz created all the beautiful colors we see.  This wood is so old, it had already fossilized when the T-Rex roamed this earth!!  Isn’t that crazy!

Many petrified logs we saw looked like someone had come and cut the wood into rounds.  However, we learned that simply the settling of the quartz created these cracks.  Because it is the shortest distance for the crack to grow, the logs break perpendicular to their length.

Most logs still had their bark texture and color intact.  We hypothesized that it had to do with the porosity of the protective bark on the tree helping it maintain it’s color.  However, this is one mystery that we didn’t solve.

The girls enjoyed checking out new and different features on the various logs on the hike.  The landscape resembled what a flooded plane might look like with a bunch of washed up logs strewn about.  However, instead of the ground being flat like you might expect, it was heaved in many mounds resembling gravel and salt hills.  What looked like gravel was actually tiny pieces of petrified wood!  Very tempting to take.  We didn’t take any, as it is strictly prohibited, but it was amazing to marvel at!

The park reenforced over and over not taking even the slightest fragment of petrified wood.  They have you watch a video about it at the visitor center before giving you the Jr Ranger books, there are signs everywhere, they have many fences up along the road side to decrease theft and they remind you at the gate as you enter.  It seemed a little intense but I can see why they do this.  In any other park the attractions are vista’s or canyons, things you can’t slip into your pocket.  For the Petrified Forest, if people steal the petrified wood, not only is it making it so that the next visitors can’t see it and taking a piece of our history puzzle with them, they also wouldn’t have a National Park anymore.

It was an amazing place and I’m so glad we went but I don’t know if I would recommend planning a long stay near the park.  We learned just before arrival that there is NO camping allowed at this National Park.  My guess is that this is to decrease theft as well.  Gates to the park were promptly locked at 5pm.  We ended up finding a place to camp free just outside the park!  A group of rock shops at the southern entrance to the park, Crystal Forest Museum & Gifts, allow campers to camp free in RV sites in their parking lot.  The sites were without hookups but had a picnic table and many logs of petrified wood used as barriers between sites.  There were also teepees for the girls to play in!  Generous and a great idea to let people camp free!  After seeing all that lovely petrified wood at the park most visitors are now itching to get their hands on a piece of their own.  Well, the rock shops just outside the gates gladly fill that need.  The girls and I each got a piece for ourselves.

You might be skeptical on how they obtained their petrified wood that they are selling.  I was too!  I asked a ranger and she said the park only protects about 10-15% of the petrified wood in the area.  Many people take it from their private property and sell it for a profit.  It seems crazy that people sell this stuff willy nilly.  It takes billions of years to recreate and only under the perfect conditions!  Once it’s gone, it’s gone!