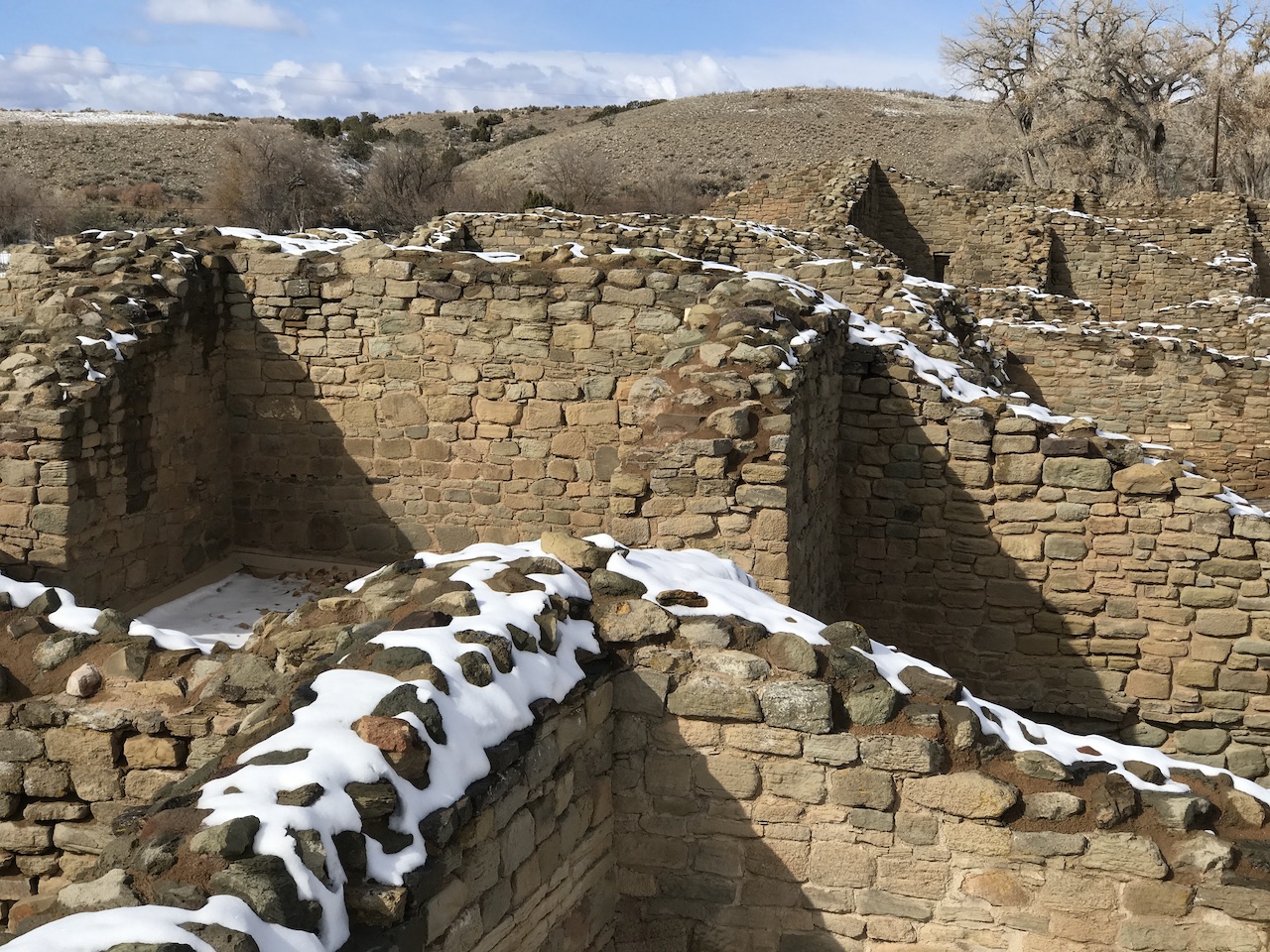 Exploring the ancient Aztec Ruins of the ancestral Pueblo people was so interesting.  Ir really put how our life now is into perspective.  Lucky for the girls, the doors of the ruins were just their size making exploring that much more fun.

Our plan was to head over to Meza Verde after Hovenweep but we decided against it.  On further research of the area, we realized it was a good 30 minute drive from the campground to the cliff dwellings and other hikes making it tricky to only stay for a couple days.  Also, many of the attractions are seen from the road on very short spur trails.  We know from past experiences that getting in and out of the car (buckle/unbuckle) is often the straw that breaks the camel’s back for the girls.  On top of that, the tours through the dwellings not only do not allow children younger than 5 years old, they also have closed down tours for the season.  We figured we would want to go back there someday and do the tours when the girls are older therefore we would skip it for now.

On our road journey from Hovenweep we traveled through New Mexico, Colorado and Arizona.  It made it seem like we covered a lot of ground.  In Colorado we took a pit stop in Cortez to get groceries and stopped at a playground so the girls could stretch.  We stayed until we turned to ice cubes and had to thaw out in the van to finish the rest of our journey.

We also swung through Farmington, NM so that I could to snag some fabric from JoAnn’s for some Christmas gifts I have in mind.

We arrived at Ruins Road RV Park, which is within walking distance to the Aztec Ruins, late afternoon giving the girls some good play time before dinner and the temperature plummeted.  The campground was split into two parts: Up the hill = full time residents living in house trailers or some in large motorhomes.  Down the hill = mostly dry campsites (meaning no running water or hookups, though this time of year all water was shut off anyway.  The full time residents unfortunately were in a barren gravel parking lot but down the hill was a neat odd little nook by a river, which we had all to ourselves.

The place was odd for sure with various remnants of half broken picnic shelters, old tables and even more random things like old rugs, cement road barriers, parts of pipes, pillows and clothing that had clearly been there for a while.  But, lucky for us, there was a nice cover of dry leaves that had fallen from the surrounding cottonwood trees to take the edge off. :). The girls loved playing on the various structures/piles!  Instant playground!  It was perfect.

Overnight the temperature dropped to 12*F.  Brr!  I felt very lucky to have our propane furnace so we stayed warm in our thick nighties and under warm blankets.  We have been keeping it at 58* at night which seems to work well.  We don’t dare turn it down any lower since our littlest still sometimes kicks off the covers only to wake a little ice cube.

The next morning felt like Christmas.  Our 5 year old had crawled into our bed to quietly chat with me while our 3 year old slept a little longer after a rocky night’s sleep.  When everyone finally woke we opened the curtains to find 3-4″ of snow on the ground!!

All of us were overjoyed!  It’s amazing that even as an adult, the first snow of the year feels so incredibly magical.  We gave the girls a small bowl of dry cereal to tide them over and then bundled them up to play in the snow.

Justin went out with the girls while I made a special breakfast.  Outside the girls had a ball making snow angels, eating “ice cream,” _____.  What fun!

I soon called everyone in for a pancake breakfast with homemade hot cocoa to put a little extra cheer in the air.  I also converted the girls bed into a table for our feast.  This felt like a treat as well!  Since it’s not the most convenient thing to do, we usually eat breakfast and dinner without a full table.  Justin and I usually eat standing or plopped on the side of our bed.  Our oldest eats at the mini bedside table on our bed (with a towel down for bed protection) and our youngest sits on a stool at a camp table in the entry way.  Not ideal but doable for sure.  When it’s nice weather we eat all meals outside which is lovely.

Just a short snowy walk down the street were the ruins. The Visiter Center was warm and full of cheery volunteers and rangers.  I was also surprised at their collection of artifacts and information they had on display in their museum.

The ruins were amazing!  The name is a misnomer– it actually has nothing to do with the Aztec people, but rather was built by the Ancestral Pueblo.  It is thought that these ruins originally functioned as a “downtown” rather than a living place for the group.

In addition to seeing and being able to walk through these many ruins, we were also able to experience what a Kiva (place of worship) looked like 900 years ago.  On the premises, a Kiva had even reconstructed onto of the remains found from the ancestral Pueblo people.  The re-construction was true to its history and quite remarkable.

The Pueblo used wood in the same way we now use rebar to create a strong structure.  It is thought that these people traveled 30-50 miles to collect the timber for the roof and supports of other structures.  Mind you, they did not have horses or other large animals to help with this.  They simply used their own feet.  So much of the construction and their way of life is incredible.

Another neat fact we learned is that this building was constructed at precisely the right angle to follow the sun’s path at the summer solstice.  Fascinating!  I could go on and on but I’ll let you do your own google search. 🙂

The girls took their oath’s to be Jr. Rangers at the park.  Again, it took our youngest two tries but she did it!  This earned both girls a movie night (as always).  Therefore, we ended the evening with White Christmas, per our girls request and my delight.  It was a magical day.

The snow on the gravel roads at the campground melted enough that we were safe to leave the next day onto our next destination.