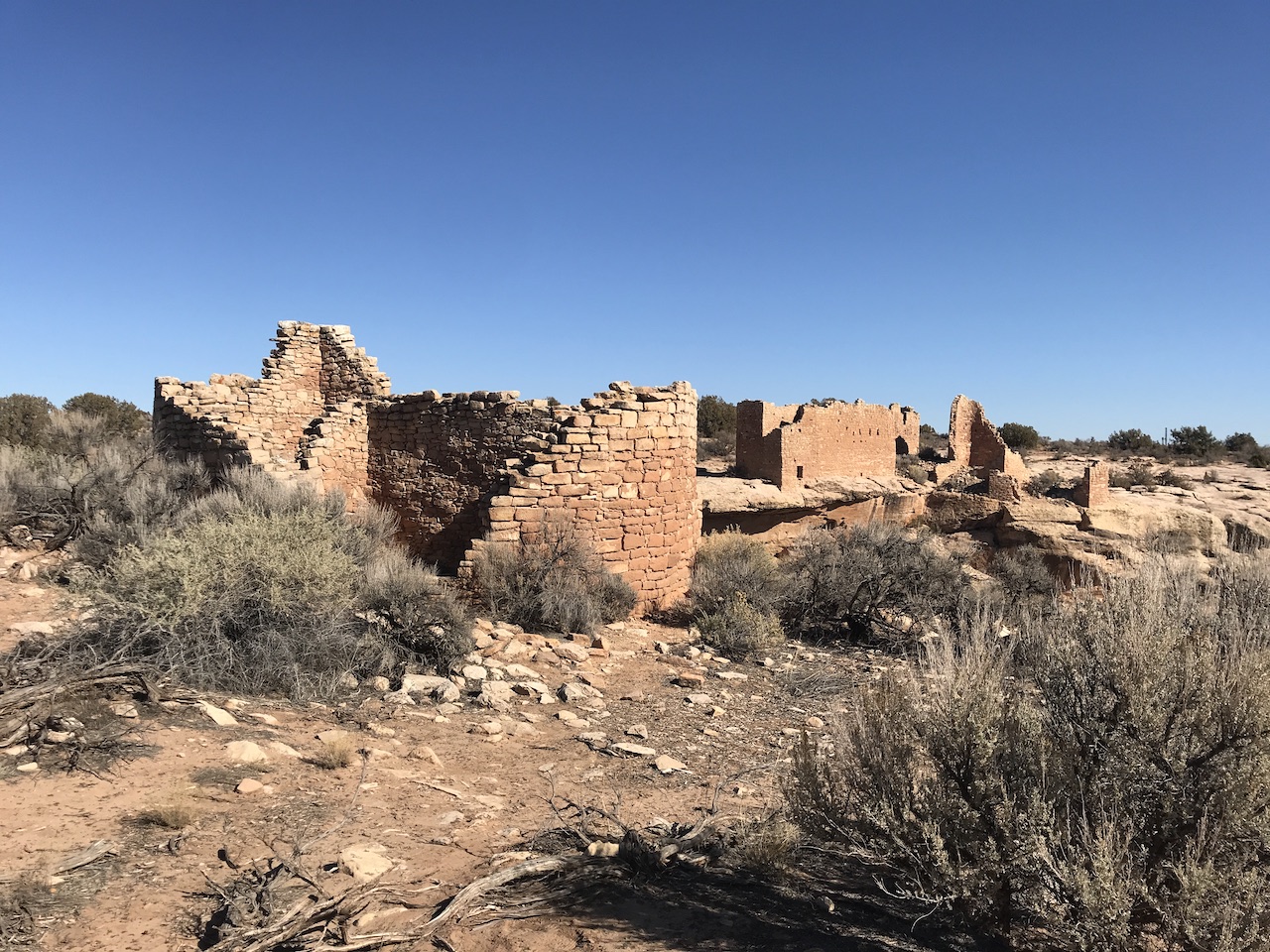 At Canyonlands we had a little preview of the kind of structures that the Ancestral Pueblo people built to store their food, but at Hovenweep we had the opportunity to see many different Pueblo houses and structures.  The skill of these ancient builders was apparent in their handiwork, and being in the presence of their ruins made us ponder what life must have been like for the people that lived here 800 years ago.

We got a late start on our departure from Moab, since we all wanted showers in the morning, and then we took a long pit stop at Hole N’ The Rock on the way.  Therefore we didn’t roll into the first come first serve campground at Hovenweep National Monument until around 4:00pm.  Just in time to make dinner!

Lucky for us, this is the off season so finding a campsite was no problem at all (there were only 2 other campers there).

We had a nice campfire to warm up on the chilly night.  It has been getting down in the teens.  Brr!

We collected the girls Jr. Ranger books and headed out for our 2.5 mile hike to view the Puebloan Ruins.

The hike was chalk full of structure after structure.  They were beautiful with such detailed masonry work.  It was incredible to think that these structures have been standing since the late 13th century.  The structures were all different shapes built with rock 3 layers thick and clay/mud mortar.  One of the structures was built inside a boulder.  Walls and rooms were built to cover the hole in the boulder.  The locations of these structures were incredible as most structures were built almost as an extension to the rock “islands” beneath them.  The sides of the buildings were flush with the sheer cliffs they were built on.  The Pueblo people entered by climbing foot holds chiseled into the rock up the cliffs and into small square shaped doors.  If that isn’t a deterrent for breaking and entering I don’t know what is.

We learned that this group of Pueblo people grew corn, squash and other veggies using water from infrequent rains and a nearby natural spring.  This particular cluster of structures is thought to have held around 200 people yet within a day’s walk there are many other Puebloan structures found in larger clusters.  What an amazing bit of history!

To finish off our quick 2 night stay at Hovenweep, Justin spent some time in the late afternoon waxing Wobbles.  Boy is this camper spoiled!  Well, he thought he was waxing it anyway.  He wiped it on but was having a really hard time getting it off.  Was it the sun?  The dry air??  Unfortunately we put the car wax in an old Nikwax bottle AND we just bought some Nikwax Down Wash for my new jacket.  So, you guessed it, Wobbles got a good Down Wash wipe down! :P.  Oops!  Wrong bottle!  It really went on just the same as the car wax and dried to a swirly haze.  Now we know there really is wax in Nikwax.  Learn something new every day!