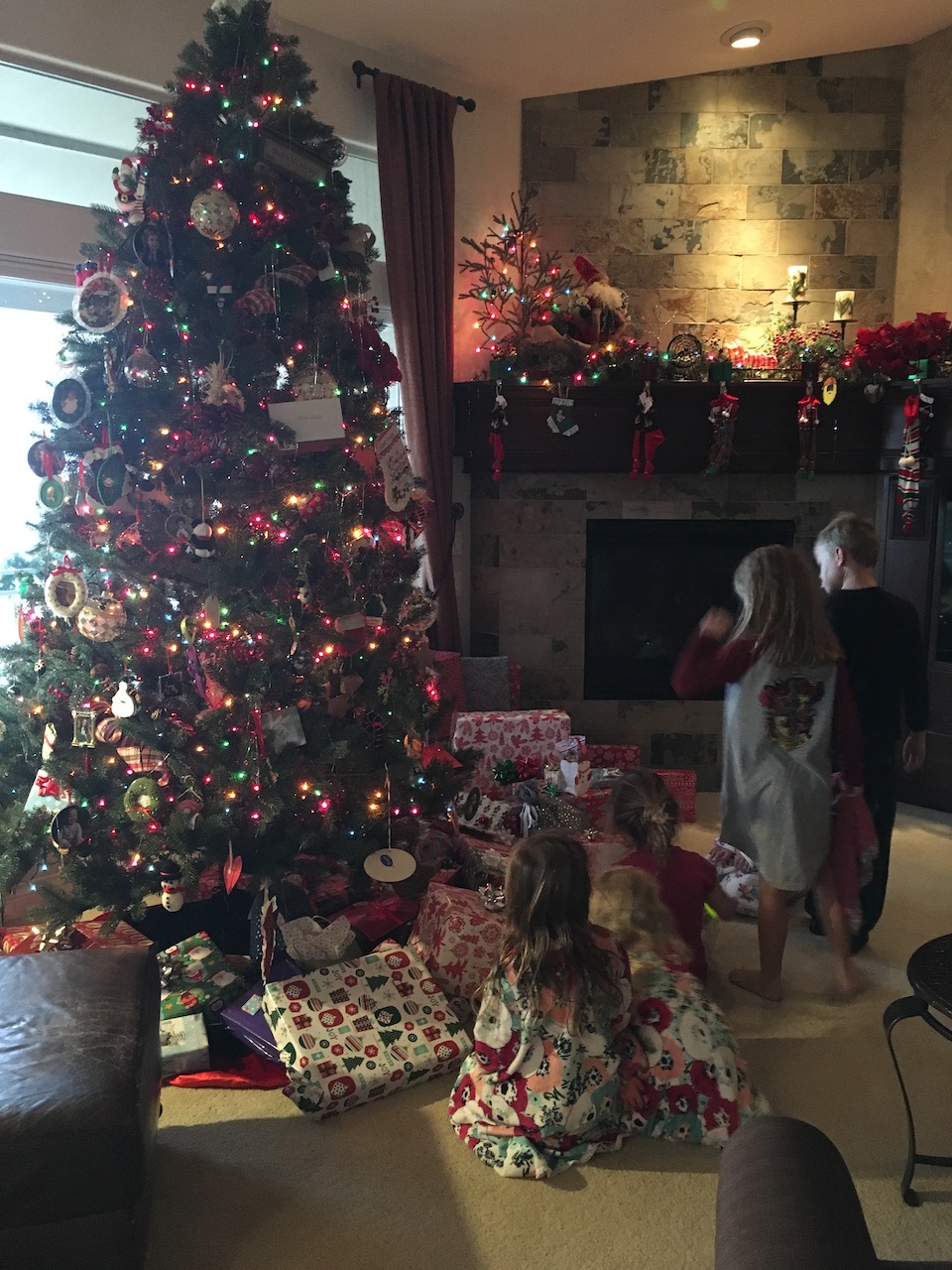 Since we were going to be on the road for Christmas, one of our good friends’ Mom, who lives in Colorado, so very graciously invited us to spend Christmas with the whole family (including our dear dear friends from Portland of course). We knew this was going to add a lot of long driving days to our trip but also couldn’t bear to be so close to them and not spend the holiday with them.

After leaving Santa Fe we knew we would be rushing through the colder climate to get to Colorado in time for the Christmas festivities. And rush we did! We all showered up before Justin dumped Wobbles for the last time before heading into freezing temperatures again. Getting a good shower never gets old. Still glorious when it happens!

The first night we stayed at a little campground, Greenhorn Meadows Park, just outside Pueblo CO. Since it was during the off season we basically had the place to ourselves. There were a few campers parked in the hook up sites up on a hill but we chose to be by ourselves in a dry site giving us entire reign of a lovely field where the girls could play. There was a little snow on the ground there and full size trees which have been rare for us over the past 3 months. It was so comforting seeing the kind of scenery I grew up with. It made me even more ready for Christmas! The girls had a lot of fun playing frisbee and stomping in the snow.

The next morning we noticed a chip in our windshield! Oh no, not again! Luckily it was a small contained chip with no spider cracks from it yet. Justin popped some super glue on it and we hoped it wouldn’t get streaked across our windshield as we wizzed down the highway. It did great with no trouble!

The dump station at the campground that we stayed at did not have a proper one. It was uphill to the sewer connection. You don’t want gravity working against you when you’re dealing with raw sewage! So, on this long driving day up Route 25 we stopped at a campground in Monument CO with a dump station. We also filled up on propane here as we knew we would be in need of more with the colder temperatures we were entering. It was shockingly cold here and in the time it took to dump and fill up the propane it went from a light flurry here and there to gusts of snow and accumulation on the ground! By the time we had hit the road, it was covered in snow!

Luckily we weren’t gaining much elevation at this point so with traffic slowed to a crawl we made it safely out of the snow with Grandpa Dimes and Wobbles. The traffic kept us on the road for a little over an hour longer than planned but we made it out safely and that’s what matters the most.

The up side is, I was able to finish knitting our little one a scarf for Christmas. In cold weather she always says, “My lips are freezing!” Haha!

Since the home we were visiting was within a community that did not allow campers to be parked near homes while people were staying in them, we parked Wobbles in a lot just within the community gates. We had filled the water tank prior to coming here so that it would be less likely to freeze and Justin dumped a bit of antifreeze down each drain as well. The black tank had been emptied as well just before arriving. Sadly, we had to leave the propane furnace going during our stay at our friend’s house so that nothing would freeze. We didn’t want to fully drain and winterize everything just for a few days.

When we arrived at our friends’ mother/mother in law’s house we were overwhelmed with joy! It was SO good to see our friends and to be in such a beautiful home with so many wonderfully loving people. The great time and effort put into this occasion was very apparent. We met SO many new and sweet people and loved getting to know them. Our girls had an absolute blast playing with the 4-10 other kids (there may have even been more!) that were in the house at various times. The kitchen was bustling at all times which is always so lovely filling the beautiful home with sweet and savory smells of comfort.

The first night that we slept there it was rocky to say the least. This is to be expected though since it was the girls’ first night in a different place. Our 3 year old woke at 2am and stayed awake until 5am. She then woke for the day at 6am. The second night everyone did great!

Every day Justin ran or drove our friend’s car to check on Wobbles. She was holding down the fort just fine. Though Justin found that running in the freezing cold air at high elevation without warm clothes, a hat or gloves wasn’t the best idea. I received a text message from Justin that said he was “recovering in Wobbles” for a bit because his lungs were “on fire.” Oh dear! Justin ate a breakfast of peanut butter cookies we had in Wobbles and an hour and a half later joined us back at the house. Soon after he fell asleep for the afternoon while the girls played and I chatted, wrapped gifts and busied myself in the kitchen.

The community in which the house was located had a paved sidewalk that went for miles and miles! It looked like a great place to bike or take a nice long stroll. The backdrop was beautiful snowy hills and rocky ledges. I wish we could have taken advantage of more of it but we did go on a walk to the playground nearby which gave our oldest some climbing time, which she always enjoys.

On Christmas Eve we enjoyed going to a church service nearby and then ended the night with the girls opening up one gift. This gift, at least when they are growing fast, is always a nightie. Luckily I was able to pack in lots of sewing time before our trip so that I could still make most of their Christmas gifts!

They went to bed with high spirits. However, sadly, our little one woke at 4am sick. She was up the rest of the night throwing up therefore our oldest didn’t sleep either. Poor little things. Well, we were the first ones in the house up on Christmas morning anyway. As you can imagine my little one and I did a lot of snuggling.

Christmas was a hustle bustle of happiness, excitement and organized chaos. We had so much fun! It was so very much needed and so nice to catch up with our dear dear friends and so gracious of this whole family to let us be part of their special day.

However, we learned the night prior that to miss a snow storm that was headed toward the Colorado Rocky Mountain Pass on Rt 70, we would need to leave by noon on Christmas. It was bitter sweet as we were headed toward Las Vegas to pick up my Mom at the airport there. We were SO excited to see her as well!

On the road again

Miraculously we packed everything back into Dimes and Wobbles, said our sad goodbyes and were on the road by 2 minutes past noon! Not bad. We were able to Skype my sweet family from the car and wish them Merry Christmas with spotty service through the mountain pass. I was amazed we had any service! I’m so glad we did though. It was so good to see their lovely faces, especially on Christmas. Soon after the call with my family, our two sleep deprived girls zonked out.

I had prepared snack bags of a variety of different foods for the girls for the ride. They also had more presents to open since it was a little bit of a rushed morning and the girls were occupied with playing with the gifts they received. Despite the fact that we had to travel on Christmas, the car ride went very smoothly.

We hit the pass at a perfect time! The sun was shining as we drove, warming the roads and evaporating any moisture.

We were slow at times but we didn’t hit any precipitation, thank goodness!! The day prior Rt 70 had some snow and the next snow storm was just around the corner. Our goal was to make it until at least Grand Junction since the elevation is much lower there on the other side of the pass.

We ended up staying the night at Colorado River State Park (Island Acres Section) just before Grand Junction. We were the only soles there! Go figure. It was next to some railroad tracks but it wasn’t an issue as they didn’t blow their horn like the trains back home in the Columbia River Gorge do. Why on earth they do that is beyond me. It’s only campers, birds and deer around, train conductors! Save your whistle for an intersection.

Nobody other than us spent the night at the park but a ranger did stop Justin the morning after Christmas to warn him about Rt 70’s bad snow conditions (if we were heading back toward Denver). That was the storm we had just missed! Thank goodness! We had timed it just right! It snowed a little bit at the campground we stayed at but was warm enough to keep the roads safe. Onward toward Vegas!