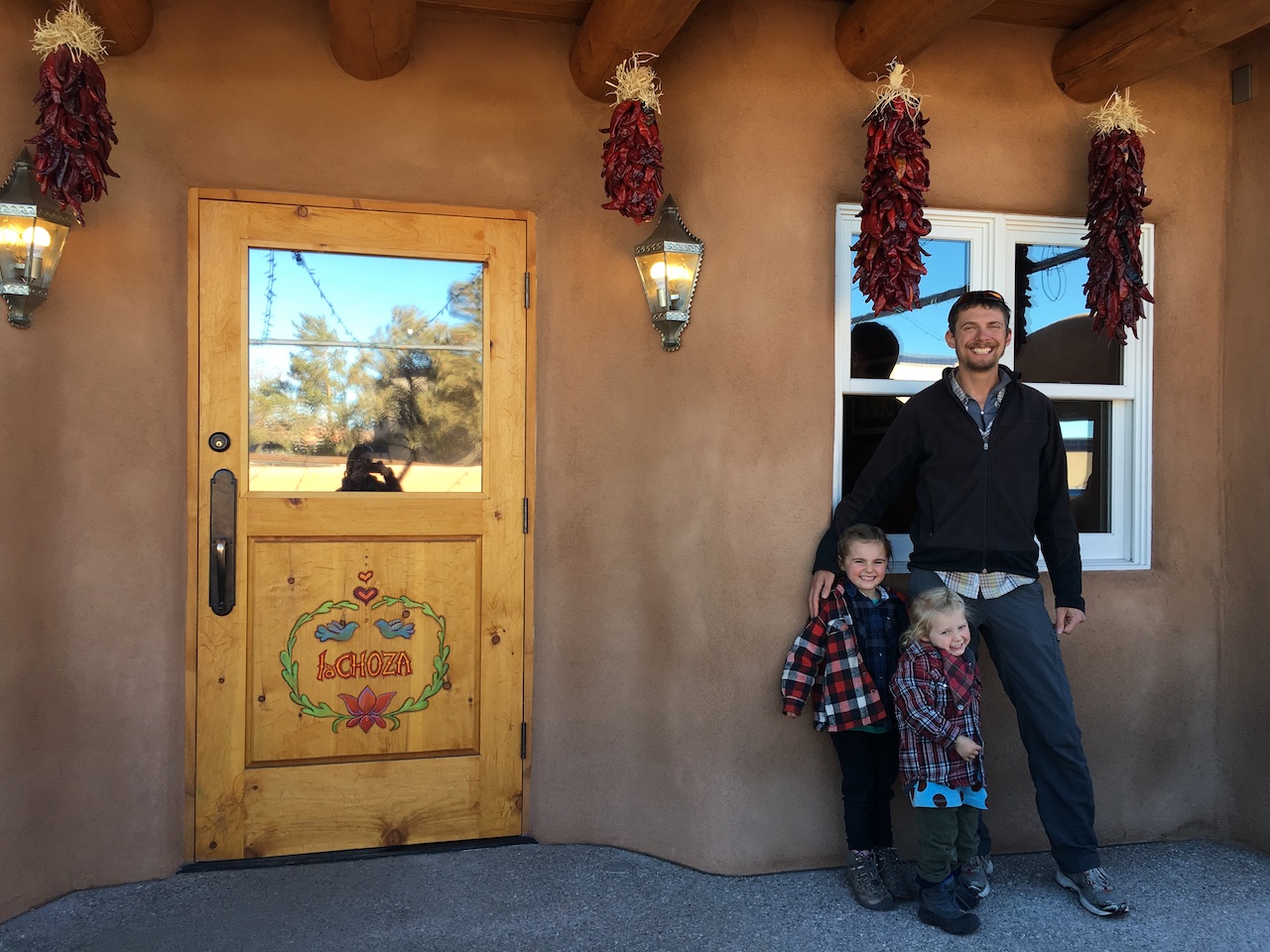 This was part of our trip where we were trying to get from warm weather to our chilly Colorado Christmas destination with little stops along the way. We wanted to breeze through the cold weather as swiftly as possible with some effort in not making it feel miserable.

We spent about a day and a half in Santa Fe. It’s a cute city that we definitely enjoyed!

In driving to our campsite midway between Tucson and Santa Fe we made a windy stop at a touristy souvenir shop. It was here that the girls saw their first giant tumble weeds! As we pulled into the parking lot a very big one ran our way. I instinctively ran out of Dimes to catch it! Don’t tell me you don’t get the urge to do the same thing?! Well, upon pouncing on it I realized just how spiky those stinkers are!! Screaming upon impact I was able to get the gnarly thing off my legs and let it blow on it’s way. Those plants sure do have an interesting way of spreading their seed and they apparently don’t let anything, or anybody get in their way.

We arrived at our free campsite, San Antonio Bosque Park, with just enough time for the girls to play for an hour before it got dark. It was a sweet little bit of land, clearly shared with the local cows and with a fire pit and picnic table.

Santa Fe here we come! It was below freezing at night in the area and soon after we started toward Santa Fe we ran into snow from a previous storm. We chose a campground just 15 minutes outside the heart of Santa Fe, Hyde Memorial State Park, for convenience. What we didn’t realize was that the campground was basically straight UP from downtown. It was 10* colder with lots of snow!

The girls LOVED the snow! As soon as we parked they popped on their boots and headed out into the snow. They promptly got their clothes wet from snow but, eh, we had electricity at this camp spot so we could dry them. It was in the 40’s during the day and 20’s at night but with sunshine during the day it felt a little warmer.

After setting up camp, getting some snow play in and filling our bellies we headed into town to run some errands. We stopped at a number of places that were fun-ish for kids such as a mall. Inside the mall held a Post Office and Office Depot for the adults and lots of Christmas cheer for the kiddos. However, we learned quite quickly that bringing the girls on fairly boring errands after having a day of driving and taking them away from the fun snow was not a good idea. They were both off their rockers!! Oy! Note to self: Leave kids to play with one parent while the other runs errands.

We spent the morning at one of the local playgrounds so the girls could get in some play fun. It was a chilly morning for sure but the girls thoroughly enjoyed climbing on the nets, going down the slowest slides in the world (ha! It was unreal and hilarious how slow the slides were), rock climbing up the many boulder structures and finding their way through the labyrinth.

For lunch we ate at a delicious Mexican restaurant just down the street from the playground called La Choza. Boy, Chalupa’s are just so tasty! We also tried Sopapillas for the first time. It is a fluffy fried dessert bread (a little bit like a puff pastry minus that much butter) lightly sprinkled with cinnamon sugar and drizzled with honey. It was absolutely lovely! Next onto the Plaza!

Okay, so I know that it was Christmas time so things are always a bit more cheery but, oh my word, the Plaza was a magical place to go look around!! I don’t know about Justin but the girls and I were spell bound by all the magnificent store fronts and Christmas decorations out and about.

As we walked down the street our oldest would shout, “Oh my goodness!! Look in that window!!! Can you take a picture of me next to it?” while grinning ear to ear.

Luckily our littlest had to go to the bathroom because in finding a spot for her to go we entered a hotel with beautiful Christmas decorations. They had a gigantic gingerbread house on display which dazzled our girls.

For an afternoon treat we went to the Kakawa Chocolate House that sold sipping chocolates (aka fancy hot chocolate). We tried samples and the girls and I found that the ones with very little sugar in them were way too intense for us. Ha, I wish I had captured the look on the girls faces when they tried it! We went for a 70% chocolate with nutmeg and Justin went with the no sugar/dirt chocolate. It’s an acquired taste. :). The sitting area was so sweet and even had a mini table and chairs for the girls. When the girls sat down and I was handing them their mini cups to sip from our youngest started getting a little nutty with excitement. Our 5 year old said, “Oh no! That’s not how you act at a tea table. You must act calm like a lady and gently sip your drink.” Ha! Our 3 year old calmed right down and sipped her chocolate. I’m remembering this moment for the next time everything falls apart.

After our chocolate I wanted to head back to see about purchasing a blanket I had seen at a street vender. However, the parking was a bit tricky and Justin was itching to get to a store to get an air pump for our tires. Our bicycle pump works but very very VERY slowly. As we got into colder weather, our tires were in need of more air.

Justin ended up dropping me off in the Plaza to look around while he and the girls ran to the store. I ended up getting a great deal on the blanket I wanted and was really glad I had purchased it. The weather got colder and colder as evening approached and I was without a jacket. I popped from one store to the next taking my time looking at everything. It was such a nice treat to be able to take my time and chat with the store owners. Usually I have the girls with me and so I’m trying to scan the inventory as fast as I can while watching the girls like a hawk reminding them to look with their eyes, not their hands and then bolting onto the next one before the girls get too wild.

Meanwhile, Justin was learning what frequent potty breaks mean. The girls each took turns needing to use the bathroom at the most inconvenient times. It sounds like half of their trip was just going back and forth from bathrooms to Dimes!

Just as the stores were all closing down, Justin came to pick a shivering Mama up from the Plaza. What a neat place to look around! This city will definitely be going on our list of places to visit again. There was so much we didn’t see.