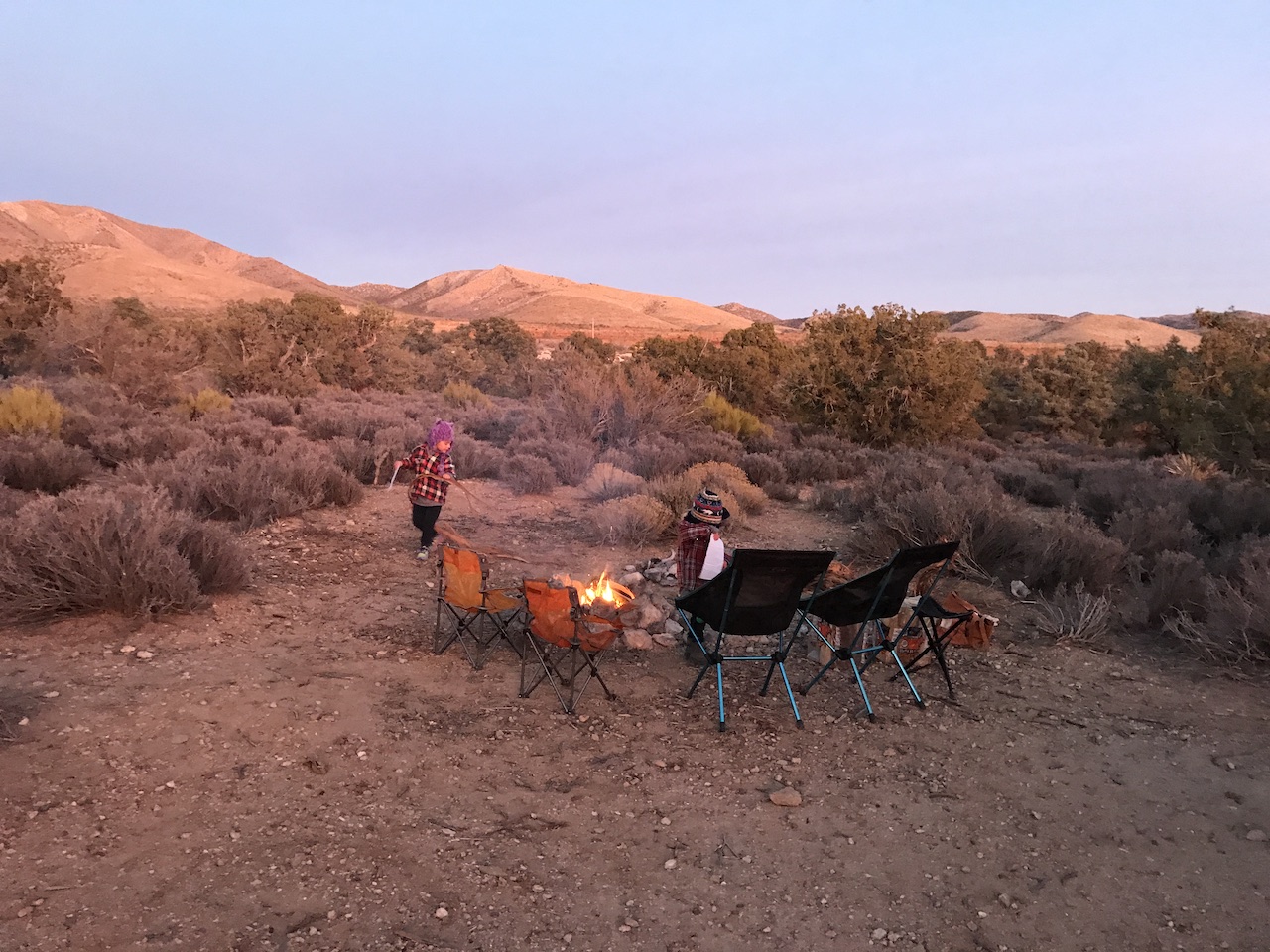 Our first sightings of Joshua Trees on this trip! They are such funny looking things. We found a great little spot to camp, Lovell Canyon Dispersed Campground, on off a semi-trafficked paved road. This spot provided a nice place to enjoy nature after the Vegas whirl wind. We also experienced two things we hadn’t planned on. One terrifying and the other magical.

Our oldest had fun climbing the Juniper trees while our little one relaxed in the hammock. It was fun for us to show my Mom the desert plants and the living soil around. Grammy and the two girls rocked in the hammock and looked through the plant/animal identification book we have. They were in heaven snuggling with Grammy and eating their snacks.

It warmed up a little bit in the afternoon with the sun shining, enough for us to take off our hats anyway. Since it was such a lovely day and we were on a paved road we decided to give the girls a chance to ride their bikes. Many places we have been staying have dirt roads which isn’t super fun to ride your bike on when you’re little (honestly, not for me either). Justin went up ahead with our 5 year old while my Mom and I stayed behind with our 3 year old.

The road we camped on had two very large consecutive hills that we were all slowly meandering up. Justin and our oldest made it up to the top first and to my amazement, they were coming back down the hill. Usually our oldest is super cautious and doesn’t like going down steep hills on her bike. She usually walks it down the steep part then hops on when she feels safe. This time she was riding down at top speed. As she got closer and closer to me I was more and more worried. They were going way too fast! Just after they passed us at a heart-in-your-throat rate of speed we watched as my oldest’s feet came off her peddles!! Her front wheel started to wobble out of control as she was careening down the paved hill at top speed!!! Then the worst happened, she crashed!! It was terrifying!

I threw the things in my hand on the ground and started running toward our screaming girl. Thank goodness my Mom was there to stay with our little one and make sure she was safe. As I was running I was sure she had split her head open or at the very least smashed her teeth in. She went head first over her handlebars onto the pavement! By the time I reached her Justin was off his bike and picking her up. I carried her over to the side of the road as Justin dragged the bike. There was a lot of blood on her hands and she was screaming like she was being killed. I laid her in my lap and checked her over. Folks, this girls life was 100% saved by her helmet. The front of her helmet revealed a gash which would have been her sweet forehead. I felt so sick just thinking about it. Her fingers were cut up pretty good and her knees were sore and bruised but boy, she was so SO lucky!! Not a mark on her face! If there aren’t enough helmet saving stories out there, here’s another one. We are so lucky she was wearing her helmet!!

I carried her home and she and I sat for a long time snuggled in Wobbles just thankful she was alive! Our little one got some Grammy story time that she loved while we were in Wobbles. The rest of that day was spent around the fire snuggling while Grammy told HOURS worth of stories. No, I’m not pulling your leg. I wish we could have recorded the whole thing!! It was so very sweet. Our little one fell asleep on my lap listening to them all and our oldest stayed alert as ever hanging on my Mom’s every word.

It got pretty chilly that evening so we decided to take out a puzzle for a bit and then Mom and I knitted while we all watched Monster’s University in Wobbles. Turns out Mom was knitting the forevvvveeerr scarf. We have this thing in our family, it’s called not knowing when to stop! We do it while cooking food (heaven forbid we run out of food) and apparently we do it when knitting! In the past I have knitted a “king” sized afghan only to find it extending not the width of a single king sized blanket but the length of 4! Haha! My Mom now, not knowing it, was creating a scarf that could be wrapped around your neck so many times you’d never feel the cold, or see for that matter! Haha! Oh Mom, I love you. We should really follow patterns.

In the morning that forever scarf was looking pretty appealing! We woke to find that it had snowed! What a magical sight to wake up to! And also, brrr. Our plan was to find warmer weather for us to spend time in and here it was snowing!!

We decided that was our cue to move on. So, onward we went which the girls had fun with Grammy in the back seat of Dimes.