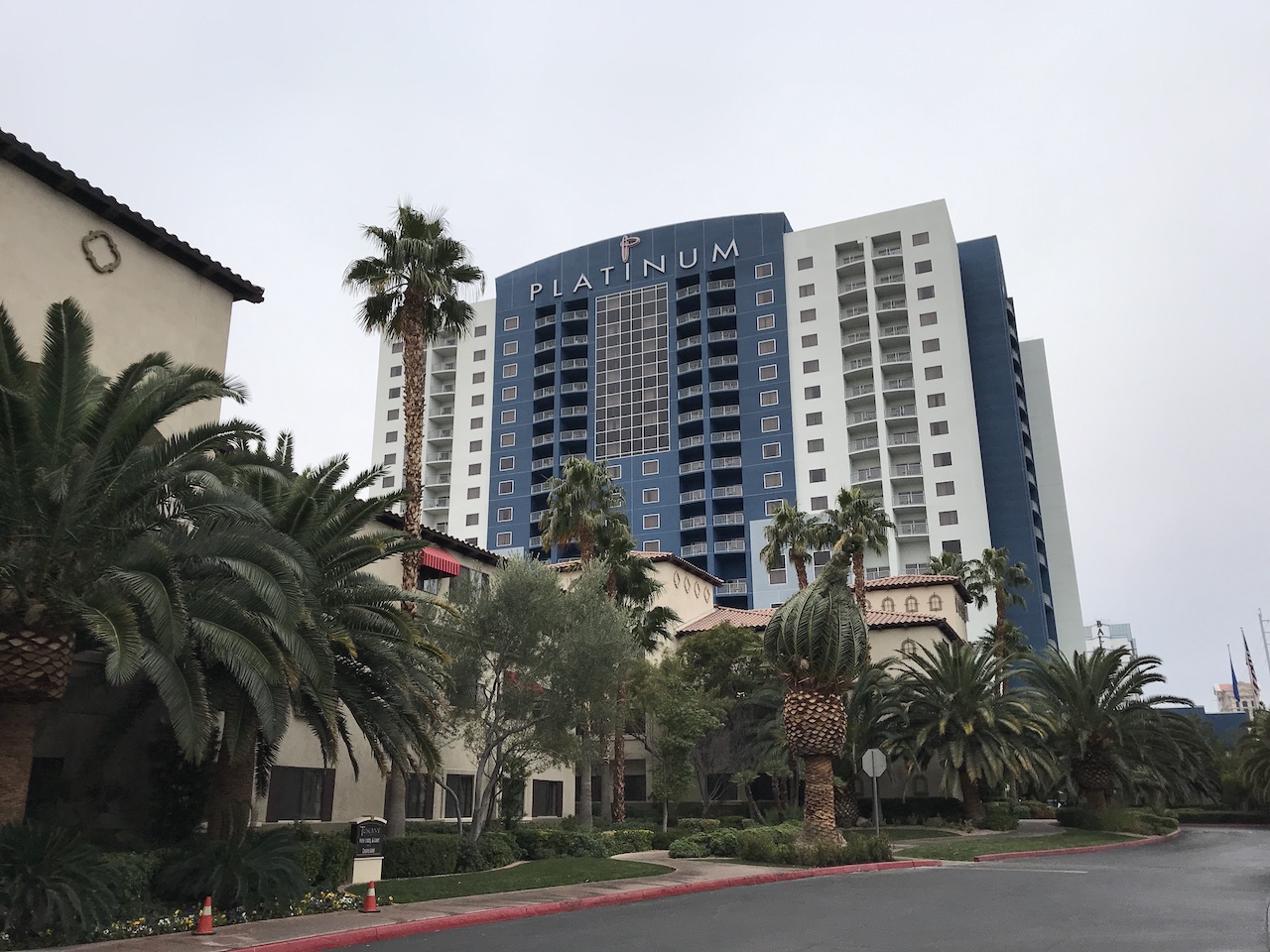 As you know from the last post, we had Wobbles at the dealership to get some work done before our warranty ran out therefore we were homeless in Vegas! Justin did a great job researching hotels for us to stay in for a couple days and landed upon the Platinum Hotel.

The Platinum is non-smoking and without a casino which was a relief! There aren’t many that can say that in Vegas. No ventilation system, no matter how fancy, can get the smell of cigarette smoke out! The hotel rooms were all suites including a pull out couch in the living room, a huge jacuzzi bathtub, a full kitchen and a main bedroom with a door. It was absolute luxury!!

The first night was rough getting the girls to bed because we were sad to see my Mom go back to her home, the bedding for their bed didn’t arrive until an hour after their bedtime and we were in a new place. I ended up staying with the girls in their bed until they fell asleep and it all mostly worked out after that.

There was none of the regular morning whining and crying from the girls. If they needed their space they simply walked away! Imagine that! We started off 2 of our 3 mornings with a dip in the pool/hot tub. The maintenance guy was around the first morning we were there so the girls looked on as he checked the chlorine levels. He was sweet enough to explain to the girls what he was doing and how it all worked.

After our pool time, Justin and I were able to shower. In fact I showered EVERY morning and the girls were able to have baths!! We were all loving it! The bathroom was as big as Justin and my bedroom at home!

From our hotel we were within a short walking distance to the High Roller (Ferris wheel). After our long morning routine and some schooling we walked over to purchase tickets.

Riders buy tickets for either daytime or nighttime. We bought ours for daytime, as it was cheaper, and also so we would have time to get the girls dinner and in bed on time. Upon arrival we were ushered to a separate line due to our stroller and then given a personal escort through special hallways and elevators to the giant wheel. The escort even waited while we all used the bathroom and got drinks and popcorn!

Boy, those Ferris wheel bubbles are certainly larger than they seem from a distance! It says they can each fit 40 people but that would be pretty tight. We were in our bubble with another family of 7 but we all had plenty of room. I learned that you can hire a bartender for your 30 minute bubble ride and have your own little party. Ha, totally ridiculous and sounds like it would be fun. It moved so slow you hardly knew you were moving but still, looking down that far with mere glass separating you and the ground so far below was a little nauseating. I didn’t feel it bothering me until the girls stood right next to the window! Eek! It was neat that while we were riding a little monitor inside told us our elevation and different fun facts about the High Roller.

Since we were getting in a bit later than usual we decided to take advantage of the half-off tiny plates happy hour at our hotel. That proved to be a bad choice. It was almost a 100% fried food menu. We each ate a couple things but couldn’t stomach the rest. We supplemented with some snack things we had brought with us but wishing we skipped happy hour all together. Although, the girls did enjoy the high bar table we sat at and their fancy personal water cups. 😉

We then poured 1/4 of a bottle of bubble bath into the ginormous bath tub and let the girls play until reading time. They had SO much fun with all that space and all those bubbles!! I hated to get them out.

We decided to check out some of the Vegas strip that we had missed last time around. We discovered a smaller fountain show that the girls watched for quite some days time.

We also made it to a Circus Circus show! The one we caught was an aerial performance in which a very talented and strong woman put on a trapeze act for the crowd, with no net I might add! I wish they would use nets. That way I could watch without my stomach in knots! It was fun to watch.

Next we headed over to the Adventure Dome which is a pink glassed dome that houses all sorts of rides. We first surveyed all the rides and let the girls each pick one to go on. Thankfully, they chose the same ride AND it didn’t require an adult to accompany them therefore we only had to purchase 2 tickets. Ride tickets were outstandingly expensive!! The girls chose a helicopter ride which allows them to control how high or low they want to be. Each ticket, for a two minute ride, was a whopping $6!! They were robbing people with their eyes wide open! Ah well, the girls loved it! They chose one of two helicopters with roofs “because they look safer than the ones that have no top.” “Plus” they added, “they don’t have those nasty guns on them like the rest. Who would put a gun on a children’s ride?”

We also happened to find the cheapest ride there. A 50 cent mini carousel! Our oldest thought it was silly at first until she got on. They both had a ball! And, we found another little girl to fill in the last seat and join the girls in a free ride.

All fresh and clean we all enjoyed our last morning with some extra elbow room. Morning tea, breakfast and getting dressed without hitting your arm on a camper wall.

The girls and I decided to spend our last hour in the hotel exploring! As a kid, this was always a highlight of staying at hotels. So, after the girls worked as a team to open the heavy hotel door we went into the elevator and I let them take turns choosing floors to explore.

Once the girls realized most floors looked the same, we decided to explore on foot in the stairwells. The girls were thrilled to find that the floor marked for employees only was open. A group of workers were busy at work loading something in from the rooftop. They let the girls peak out of the forbidden doorway. They felt so sneaky and were smiling ear to ear.

It was time go to the doctors (dealer) to see how Wobbles was doing. We weren’t sure if the work would be done therefore upon checking out of our hotel we weren’t sure if we’d be checking into a different hotel that night or taking Wobbles with us and sleeping in her. It was a strange feeling of not knowing where we were going to sleep. At that point, we had our luxurious stay at the hotel and were ready to be back to our home on the road.

Upon arrival to the doc’s they told us everything was done. Great news! We hitched up and headed off toward Lake Havasu, AZ, where we were going to meet up with the Full-time Families group again.

On the way we sought out a recycling center, as we had quite a bit of recycling that had built up in the van. What the girls did here melted my heart and made me so proud. They were appalled at the trash they saw on the ground nearby and insisted that we stop to let them pick it up. Our oldest said, “We need to help take care of our planet! Would you like to eat styrofoam for dinner?? Neither would an animal.” They both went out with their bags and collected giant bags of trash. Such sweet girls! I hope they always feel this way toward our planet.

The conclusion to this vacation within a vacation is that the hotel stay was very refreshing. It was so nice to have some extra space and a hot shower and bath. It’s the little things. I can see why families who are on the road full time would need to take a break in a hotel now and then. It seemed to reset us a bit.