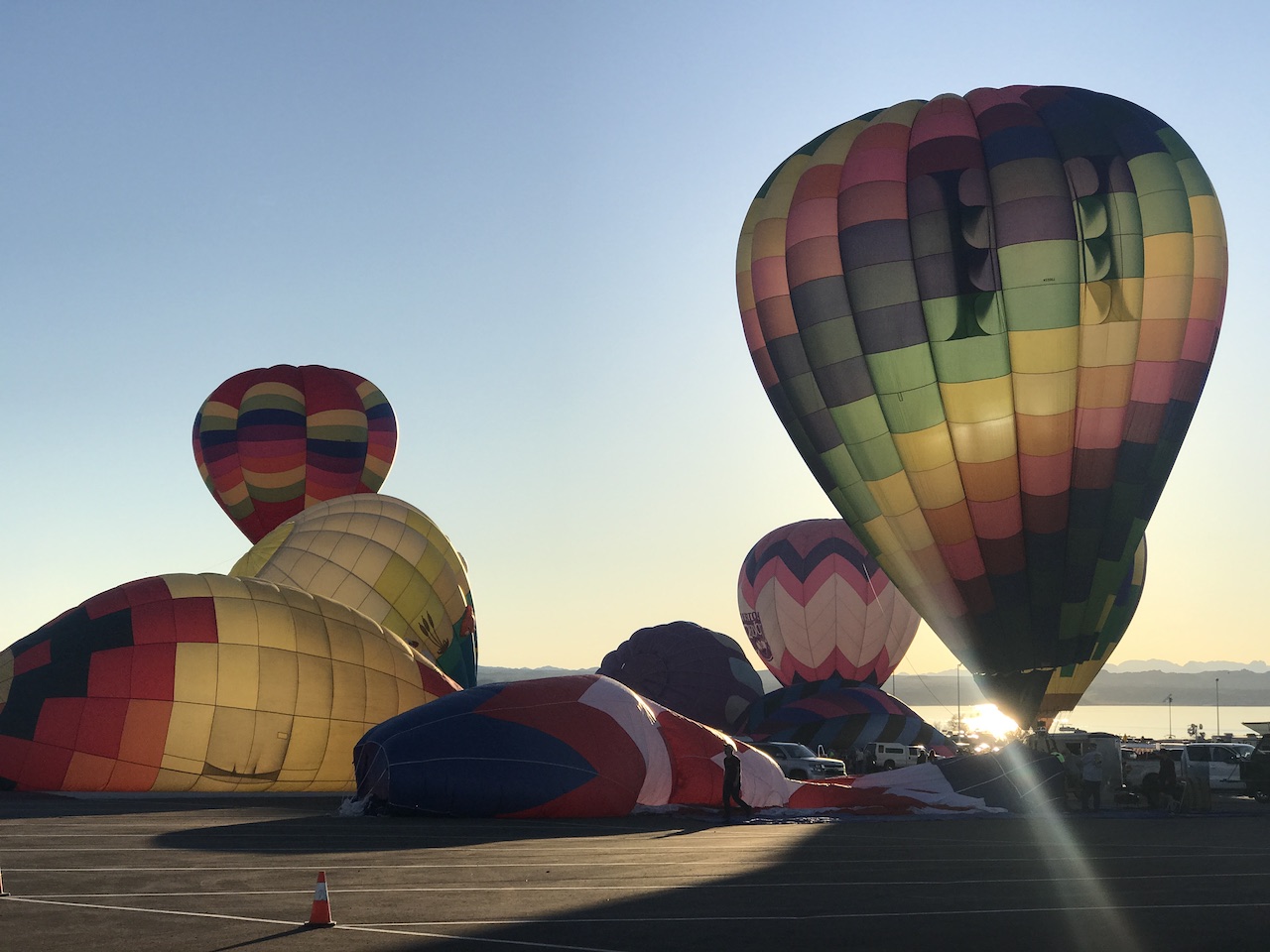 The Full-Time Families group that we are a part of had another meet-up in a town called Lake Havasu AZ near a balloon festival.  We all camped on BLM land outside the town.  Some of our friends we had made at a previous family meet up had saved us a spot so we decided to check it out.

This meet up was considerably bigger than the last one we had attended.  The last one had maybe a dozen families attend with varying number of kiddos.  However, this one was about double in size.  We were glad we had a back row spot away from the center ring of activity.  It gave us a choice to be part of things or to have a little space from the craziness.  This group of kiddos did have a larger selection of kids within the 5 year old range which was nice from a playmate stand point.

The second day of our new spot at the meet-up someone had organized a hike.  Learning from our previous mistake, we drove ourselves to this trailhead so we could leave at our leisure.  We knew going into it we wouldn’t keep pace with the other older kiddos but we thought we’d hike in until we saw some scenic sights and then turn around so the girls would have enough steam to make the return trip.

The hike was called Sara’s Crack!  Haha!  We had a good laugh out of this.  My oldest said, “Mama, we’re hiking in your buns crack!  Haha!”

It was a 5 mile loop trail that took you down a dry riverbed and into an amazing slot canyon.  Upon stepping foot on the trail the girls of course ate their way through our stash of granola bars.  I tell you, it doesn’t matter if they have just eaten a feast.  As soon as they set foot on a hiking trail or in Dimes, they are all of a sudden starving!  Pavlovs Dogs people, it’s a real thing.

The trail was littered with good climbing rocks and caves just their size making for a fun poky hike.

At last we came to the slot canyon, my buns crack!!  It was amazing!  Almost right away there was a huge smooth rock drop off to a landing below.  It was clear that water had carved this giant rock into a slick water slide.  It must be amazing to see when water is flowing in it.  However, I don’t wish that on anyone!  That would most likely be the last thing you see.  The slot canyon was so very narrow through this part, when the water is flowing it must be fierce here!  Conveniently placed at the top of the rock slide there was a rope anchored into a rock.  This aided in lowering yourself down without such a forceful drop.

At this point many hikers turned back as this wasn’t what they signed up for.  However, the girls and the two of us loved it!  It was beautiful and such a neat slick rock slide.  Our technique was to have Justin go down first and then I lowered the girls down to him from the top as he guided them carefully down to the bottom.

At this point in the hike we saw that we had to cross some water within the pockets of the canyon floor.  We could make it across without getting wet by carrying the girls across but since it was getting late in the day we decided that was a good time to turn back.  On the way back the girls did their fair share of climbing again.

It ended up being perfect timing!  We ended up finishing at the same time as the group who took the full loop.  The best part was, there was no complaining from the girls!  It was a perfect balance between full bellies, climbing time, new things to see and a good amount of time on the trail.

It’s important to have days like this every now and again.  On this day we cleaned Dimes and Wobbles, organized our things and let the girls play to their heart’s content.  The thing I always appreciate about these Full Time Family meetups is that all the kiddos (of age) are homeschooled.  Therefore, there is never the feeling of “we’re missing something” in the morning.  All of the kids are inside their campers doing school so our schooling doesn’t feel rushed.  It’s tricky when we are doing schooling and our oldest sees her friends outside having fun without her.  As you can imagine it is hard to concentrate.  Schooling is much more productive when she knows everyone else is doing the same thing.

That evening we decided to go into town to see the 4:30pm balloons take off at the balloon festival.  We were running a little behind so as we were approaching town we saw more and more balloons in the sky.  It was so neat to see.  The timing was great!

By the time we found parking and got over to the festival the balloons were still taking off.  We were able to  see them close up!  Our oldest thought they were great until she saw the big flames.  Then she wanted to admire them from a safer distance. Man, those balloons are huge!!  I had never been so close to one.  It’s incredible that they are able to fly!  It seemed almost cartoon like; just fill the fabric ball with hot air and it will lift you and your basket full of people in the air.  Kind of incredible!

We stayed so long admiring them that we were there for their evening show Night Glow as well.

In the Night Glow show, they wait until dusk and then they try to coordinate their flames to music.  When the balloons started their torches in the evening, they lit up like lanterns.  It was so magical and looked like a lot of fun.  At first we thought they were going to take off and were frightened about how they could do that safely.  We were hypothesizing how it could be done when someone told us it was just a light show.  The balloons didn’t take off in the dark.  Good!  How fun to see!  We ended up making dinner in Dimes in the parking lot because we had stayed so late watching the balloons.  I was so glad we have a full kitchen in Dimes to make nights like those possible.

The next day I spent baking!  Woo!!  I love days like these.  These days recharge me and make me happy.  The girls took turns coming in and helping me out with the perk of being my taste tester.  How on earth else could we be sure our ingredients were worthy of baking with?!  We made a giant chocolate chip cookie (so that we could give some to our neighbors from Portland who we would be meeting up with soon), a raspberry pie (in celebration of my Mom’s birthday the next day) and some crispy cinnamon pie crust to nibble on.

While I did this, the girls went out and found desert trash.  By this I mean old rusted pieces of equipment that people dumped on the BLM land.  It made for quite the play area for the kids and classy lawn ornaments for our camper.  For a good portion of the day, we had a dozen kiddos playing and using their imaginations with the trash next to our camper.  It was pretty funny.

Isn’t it great that such simple things kids can use their imaginations and it can give them entertainment for hours?!  Compared to this, adults seem so boring.  Life is so simple and fun for kids.  It’s really a time to treasure.  Moments like these makes me so glad we’re able to do homeschooling for the girls.  They get their schooling in but they can still be kids most of the time.  So much time for play and creativity.  Honestly, I think this has a lot to do with why our oldest is excelling in her school work so much.  She is given the freedom to use the knowledge she learns in school in her own play and within an environment that gets her excited.

On our last day we ate pie and sang to my Mom (on the phone) for her birthday, cleaned up again in preparation for our next move and attempted to catch the last balloon flight of the festival.

We found a laundromat in Lake Havasu with front loaders (Modern Laundromat).  Hurray!!  I stayed and did laundry while Justin took the girls to a playground nearby.  It was glorious!  I knitted and switched the laundry.  Easy and relaxing!  Plus, the laundromat was the cleanest and fanciest I have ever seen!!  There were two women working there who went around cleaning the floors, insides of the washer and dryers and dusting in every nook and cranny.  It was so lovely!  Our clothes were fresh and clean when they were done.

Meanwhile, the girls and Justin had fun at the park.  There was even a zip line at the playground for the kids to ride on!  What fun!

From the laundromat we went to Sara’s Park (the trailhead of the crack hike) to a dog park to meet up with our traveling neighbors from Portland.  It was so nice to see them and such a great coincidence that we were traveling in the same area at the same time!  It seemed like they were having some good adventures on the road.

That afternoon we went back to the balloon festival and let the girls each pick one “ride” to go on.  Both picked a dinosaur bouncy house/maze/slide contraption.

Our oldest loved it and our youngest thought she’d love it, until she realized that I wasn’t coming in with her.  She took off her shoes, took one step toward the door and froze.  “Mama, come with me.”  The volunteer running it ended up letting me go into the house with her.  After some time our oldest and I talked the little one to do one loop around the house by herself.  Reluctantly she did and sadly it was bad timing.  Just as she ventured off by herself a group of older kids pummeled her over!  Poor little thing.  So, I basically stood by the side of the netted entrance holding onto our 3 year old’s hand as she jumped.

The weather was cloudy with a threat of sprinkles so the balloons didn’t end up going up or having their night glow event.  We were extra glad we had seen it before since they cancelled the last night.

We had successfully gone 6 days on our black and grey tank and were now dumping at a local state park before entering BLM land for another week.

This was also the day that our 5 year old started her 3rd grade math book.  This girl is learning division and multiplication.  Woo!