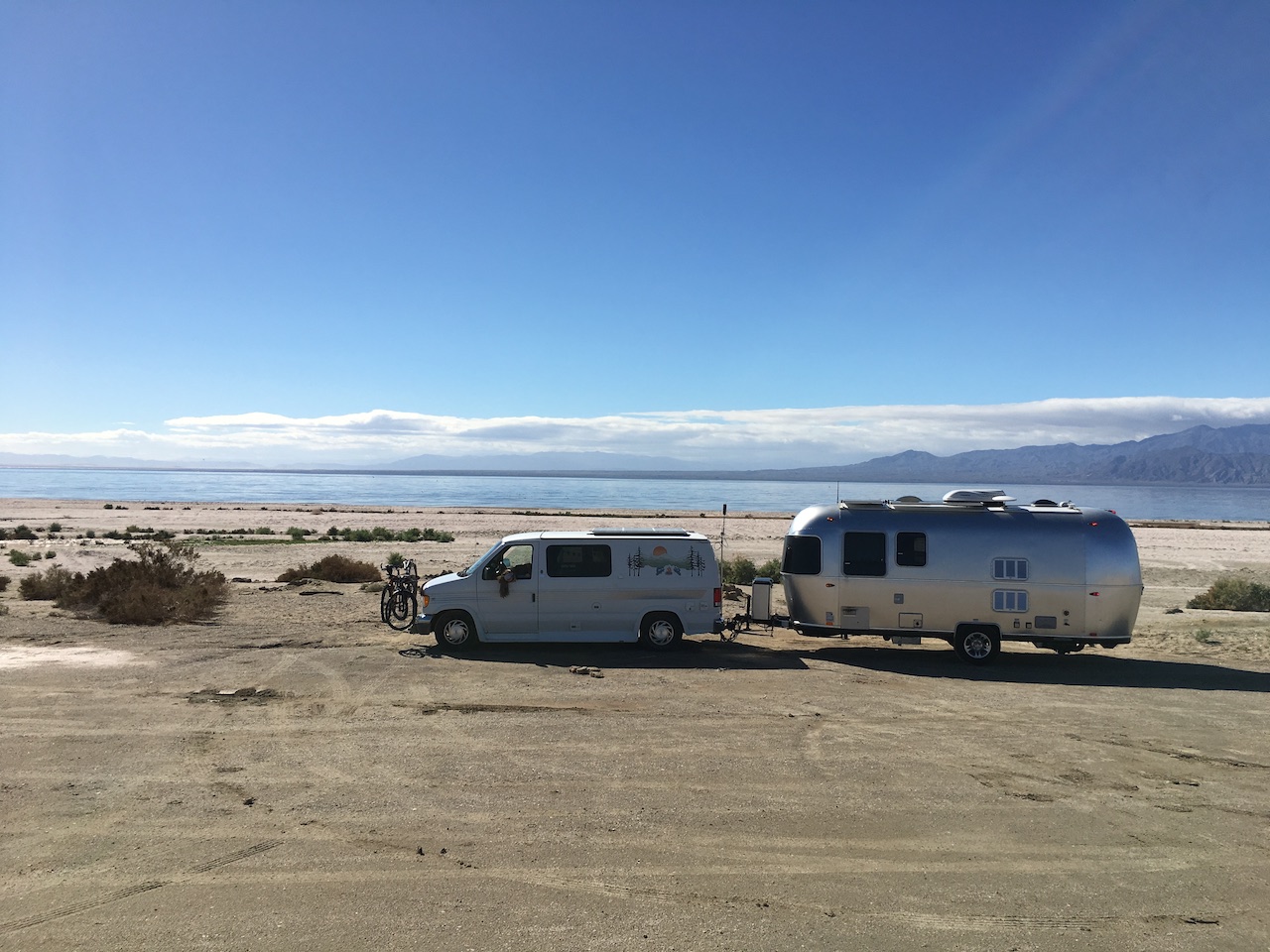 We had not decided where exactly we would camp for the night so when we saw beautiful white sand beaches next to a lake that had camping in several spots we jumped on it! It turned out to be not what we expected…

Justin had done a little research as far as what reviewers had said about their experience camping at the Salton Sea. The reviews said that it smelled like dead fishes. Hmm, we checked it out. As we pulled in and opened our doors the reviewers were validated with the sea smell in the air. ‘Well,’ we thought, ‘so it smells like the ocean…so does the ocean and we like that!’

Right away we got out the girls’ buckets for them to look for shells on these beautiful white sandy beaches. The girls asked to go barefoot but I wanted to be sure the ground was safe to step on first so I asked them to wait. I was so glad for this! As we walked closer we realized it wasn’t white sand we had been seeing. It was more like shells. Justin and I were chatting back and forth about potential camping plans for the next couple nights when our oldest said, “I found a bone!” I looked and, yes! She did in fact have a small bone in her hands. As I was asking her where she found it I crouched down to take a better look at the ground beneath our feet. No, this certainly was NOT white sand and it certainly was NOT shells. These were bones!!!! It was a bone beach!! AHH! It was a combination of lots of small animal bones such as fish, rodents and what appeared to be dead barnacles. It was sickening!

Probably not the smartest idea, but the girls and I went to peak a little closer to the water while Justin researched if this was a safe place to be. What the girls and I found was absolutely stomach turning! The girls found numerous little skulls that I guessed belonged to birds and small rodents such as squirrels. We found a couple dead fish with some flesh left on them as well as heaps full of pure bones and some dead birds at various levels of decomposition. The bone beach was so thick it was swallowing our shoes just as sand would at the beach only they were sharp and let out a back chilling crunch when you walked. I dug down at least two feet in the bones with no end in sight! If you looked around there were miles and miles of this bone beach. It was disturbing to think about!

As we got closer to the water the horrific putrid smell of rotting bodies grew stronger and stronger. By the time we reached a very large green sludge pool the smell was overwhelming. The “water” was covered in a thick layer of scum and filled with what looked like “gluppity glup and schloppity schlopp” as Dr. Suess describes in The Lorax. It was discussing! Enough was enough. The girls and I had made up our minds. We were not staying here and we were heading back to the camper to sanitize immediately!

By the time we got back to Justin he gave us a scoop on the research he had done about this lake.

We learned that this body of water was created quite by accident! In 1905 the Colorado River swelled and flooded the desert valley known as the Salton Sink. The water flowed into this area for 2 years forming a 15 x 35 mile lake named the Salton Sea. In the 1950’s and 60’s this was the beach to be at; a resort destination.

By the 1970’s the ecosystem was deteriorating rapidly with no new water coming in from the Colorado River, almost no yearly rainfall and toxic runoff coming in from the nearby farms. At this point the water within the lake was saltier than the Pacific Ocean! Periodic flooding brought the dead fish, depleted of oxygen, and toxins farther on the shore. Now the beaches are covered in carcuses at least several feet deep and the waters are filled with salt, petrol and green rotting sludge. It is a cesspool! Justin also read that it poses a risk to local residents every time the wind blows. The wind carries the pesticides off the dried portion of the lake bed into the lungs of locals giving this towns people extremely high rates of asthma. Such a sad and frightening story.

After learning all of that we not only washed our hands, we changed our clothes and washed up with washcloths. Even if it didn’t help to clean us up, we felt better afterward. We were OUT of there!