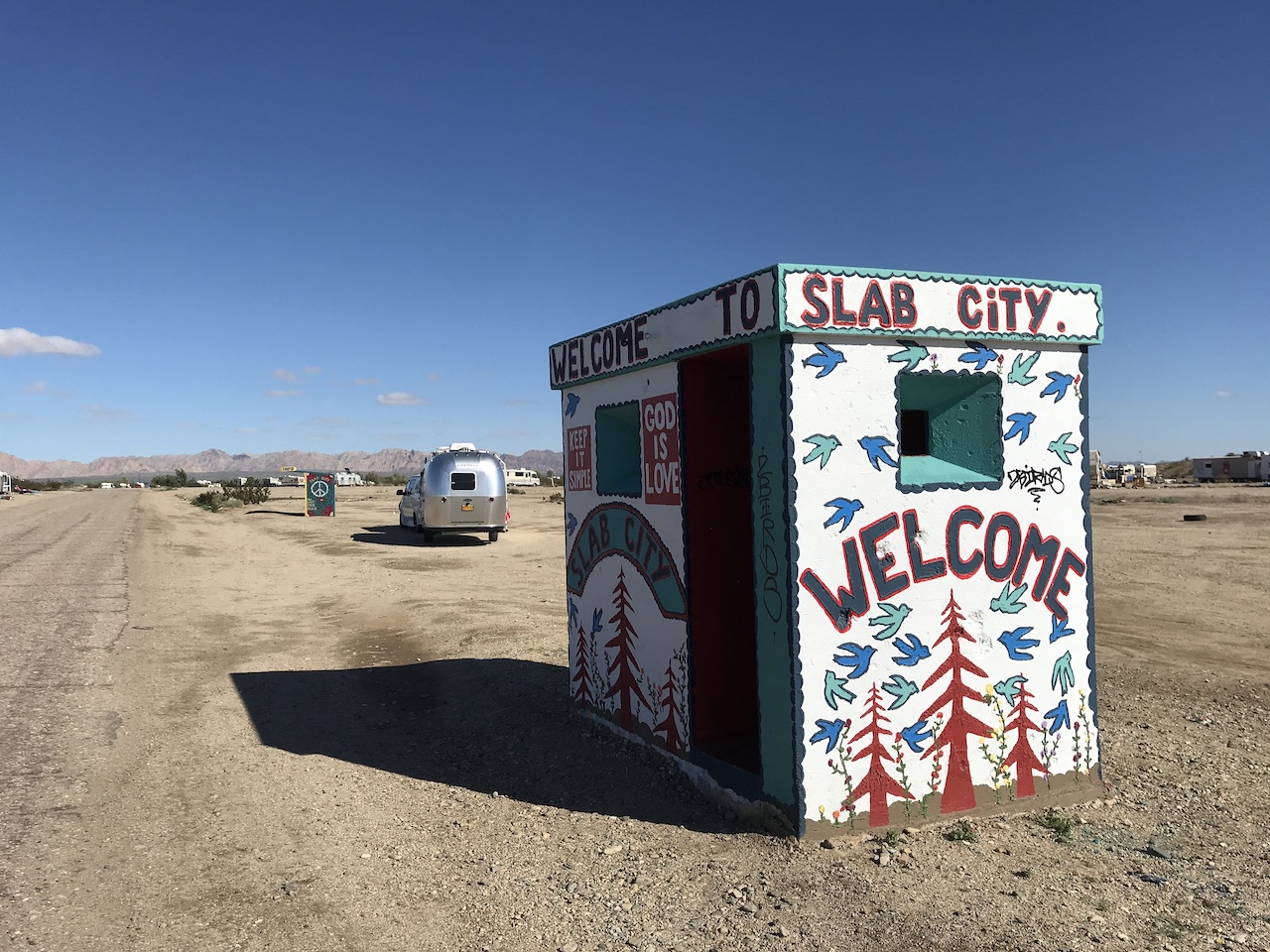 This stop wasn’t originally on our list but after the fall out at the “Dead Sea,” I mean Salton Sea, we decided to make a pit stop at Slab City which was only an hour away.

If you haven’t heard of Slab City, it is a free camping place that people have occupied and created a community in located near an active bomb testing zone. The land was once a WWII Marine barracks. The slabs of concrete still remain, hence the name ‘Slab City.’ There are a couple thousand residents who inhabit the place in the winter months and about 150 who are full time ‘slabbers’ and stay for the scorching 120* summer days.

As we approached Slab City we could see the famous Salvation Mountain. It is a hill that is intricately painted like a canvas. The creator of this mountain lived out of his truck in Slab City for over 20 years. He has since passed away but the mountain is still maintained as best locals can. We pulled over and took some pictures with the mountain and the decorated vehicles that littered the desert.

Most were religious messages painted on, some friendly greetings, others protests. The detail that was put into these was pretty amazing! All art in Slab City is created with what they have and most is from trash. We saw lots of creations made by the hundreds of used cartridges found from the barracks. There are some really talented people in that place. What is one person’s trash is another’s treasure!

We drove around a bit with Dimes and Wobbles through their town streets to gawk at the interesting little huts/forts/homes people had made for themselves to live in.

Some were campers with a decorated lawn, some were pieces of plywood leaning agains a tree with trash enclosed in their fence and others were well thought out and constructed structures made of various materials.

The going was rough towing down their streets and we wanted to see more. So, we decided to stay for the night and explore that afternoon by bike. We parked next to some seemingly abandoned campers, locked up and popped on our bikes. Justin towed the girls in the carrier while I rode beside. The roads were great for bikes!

First we checked out the library, which was unreachable while towing. It was open air (as was mostly everything in Slab City) with various sheets of fabric shading the books as well as some boards overhead here and there. It was really quite cute. The floors were lined with old carpets and shelves were built in little pathways which then opened out into the main reading area. The girls were delighted to see a children’s section!

They each picked out a couple books and we pulled up some chairs and read for a bit. The books had clearly been wet more than once and were weathered but the girls didn’t mind in the slightest. They were thrilled to have books read to them! Everyone was so nice there.

The last place we visited was East Jesus which was a sculpture garden. The gentleman in charge was a little odd for sure but he meant well.

There were sculptures of Dorothy’s house crushing the Wicked Witch of the West, a giant tire elephant, a 12′ working teeter toter and my favorite, an outdoor instrument set. There were some creepy sculptures too of course but we chose to skip over those.

The only thing that frightened me about our stay was when I happened upon a 4-wheeler without headlights after dark. I was just stepping outside Wobbles with our 5 year old in my arms heading over to Dimes to read our bedtime story when a 4-wheeler without headlights flew past the buns of Wobbles. I think the driver saw us but it frightened my daughter and I for sure!

Overall it was a neat place to visit. These people’s way of living was so fascinating. Everyone we drove or biked past or talked to was very kind and welcoming. I’m glad we went.