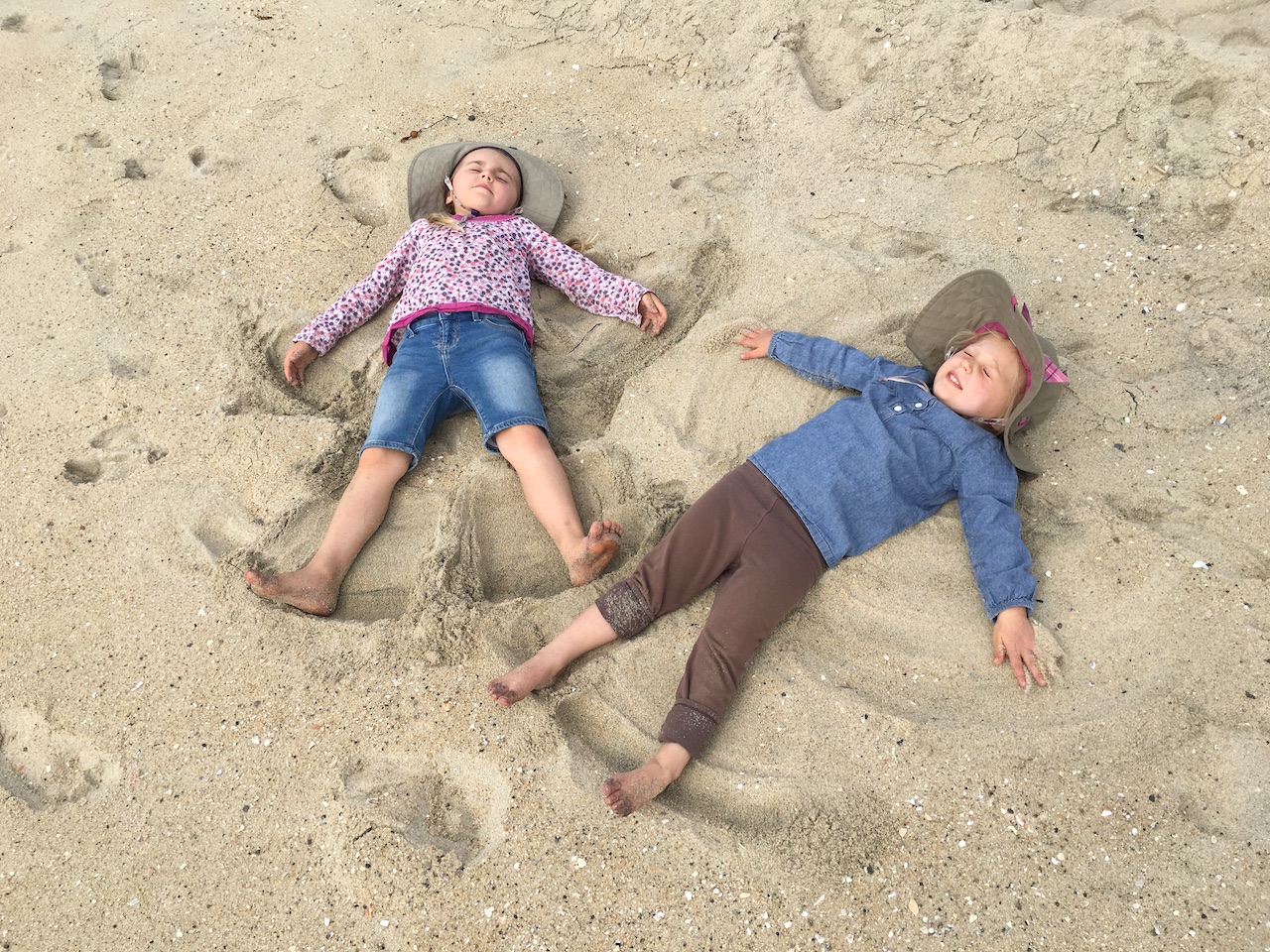 While in San Diego, Justin was introduced to a software company in which he fits the bill almost completely for. Still not sure what the future holds with this but this introduction led us to stay in San Diego at another friend’s house for a couple more days. Our friend lives in a cul-de-sac in Carlsbad so we were able to park outside his house during our stay.

After parking Wobbles at our friend’s house a bit farther north from where we were, we decided to enjoy the semi-overcast day on the beach. Before we headed to the beach we fueled up at a Mexican Restaurant called Señor Grubby’s. Justin ordered a burrito, our 5 year old ordered the kids menu bean and cheese burrito and our little one wanted hard tacos but settled for nachos when they didn’t have that on the menu. I wasn’t feeling very good so I decided I’d just dine on the leftovers the girls had. Boy, I was glad I didn’t order. The girls meals were gigantic! They were much bigger than Justin’s! It was so funny. Both girls were shocked at their meals when the waitress set them down in front of them. I snagged a photo of their reactions. Priceless! Needless to say, we had leftovers for the next day.

We went to Seaside State Beach in Encinitas where the girls had a blast! Our little one wanted to bring Bun Bun her stuffed animal but I insisted she stay in the car because of all the sand! Our compromise was that we gave Bun Bun a comfy seat in Dimes, gave her a snack and the walkie talkie in case she needed us to come back. Deal! Bun Bun was so patient while we were on the beach. Not even one radio message!

The beach was beautiful as the tide was coming in. The parking lot and top half of the beach was at a higher level from the incoming tide which made the waves look even more impressive as they slip up and down the dune. It was fun to watch a handful of surfers ride the waves. Boogie boarding is more my speed. 😉 The beach had little bits of tiny shells along the high tide water line so I collected some for a school project and the girls hunted for swirlies (the twisty top of spiraled shells) and made sand angels.

When we go to beaches the rules are: No sand in the hair and no sand on the face. Obviously these are hard rules to keep when you’re a kid but they usually give them a valiant effort. On this particular day our little one was being a goof ball and flailing about during which time she splatted herself face first into the sand! She got a little bit of sand in every face opening. Yuck and ouch!

We had heard it was calling for rain throughout the day so we decided it would be a good day to explore a museum. Justin stayed in the parking lot and did our taxes in Dimes while the girls and I checked out the museum. We went to the San Diego Children’s Discovery Museum in Escondido which we got 50% off admission. It was a very small but sweet museum with an indoor and outdoor space.

Luckily we thought to do the outdoor space semi-first since the weather was calling for rain. The outdoor area was of course after the girls had found fun costumes to dress up in. Outdoors there was a bubble station, a water table, a garden to walk in and a space to play with giant blue blocks and rubber tracks for balls. The girls had so much fun creating and perfecting a track for the wooden balls. It was neat to see the two of them problem solving together about how the track could work best while still having interesting features and obstacles.

We took a break to eat lunch in the van and when we did, the skies opened. It started light at first but quickly became some serious rain. Something I noticed about the places we visited in San Diego is people don’t plan for the rain like we do in Portland. Everything you construct in Portland including your yard has to be carefully grated so that the rain runs away from your foundation and drains appropriately. In San Diego it seems like since the rain is an occasional thing places aren’t designed for it. The discovery museum was no exception to this. Even after a light sprinkle the outdoor play area become a pool of water. After it really started raining it become semi-hazardous where they either had to start handing out life jackets to the littles or close it down. I guess they didn’t have enough life jackets in stock so they chose the latter. Ha! Luckily this meant my kids skipped getting drenched from the water table or sticky from the bubbles. Thank you rain!

Inside the girls had a blast dressing up in the many beautiful Indian dresses and attire provided while they “cooked” in the kitchen and pretended to buy things in the pretend store there. Those dresses they tried on were so beautiful that I took detailed pictures of them so I can try and recreate them at home. 😉 The sad part about the costumes was the fact that all were ripped or broken in some way making them either tricky to get on or difficult to have them stay on. All the mending would take no more than an hour. I wish I had my sewing machine along and were there longer. Maybe someone else will volunteer their time to mend the costumes! It did make me wonder if our children’s museum has the same issue in Portland. I’ll have to check it out when we get home.

Anyway, the inside section also had dress up things for fire fighters and police officers which was pretty cool. The girls even got to sit on a police motor cycle in their leathers. It was pretty cute.

There was also blocks, lego type things and magnets to play with. It was a tiny place for sure but a great place to go on a rainy day. Justin got some of our taxes done, a blog post out and the girls and I had fun…win!

Our friend’s were so gracious to let us spend our last day in San Diego in their house cooking a delicious dinner, getting clean and letting the girls play. It turned out to be a good day to do this as there was a huge storm with very high winds and flash flooding. We mostly watched from inside our friend’s warm home as the storm raged outside.

We all had a nice day and ate a yummy dinner. We left some for our friend’s too, don’t worry. 😉 Sadly, in the hustle bustle of the day I forgot to take a picture of our meal! Ah well…next time.