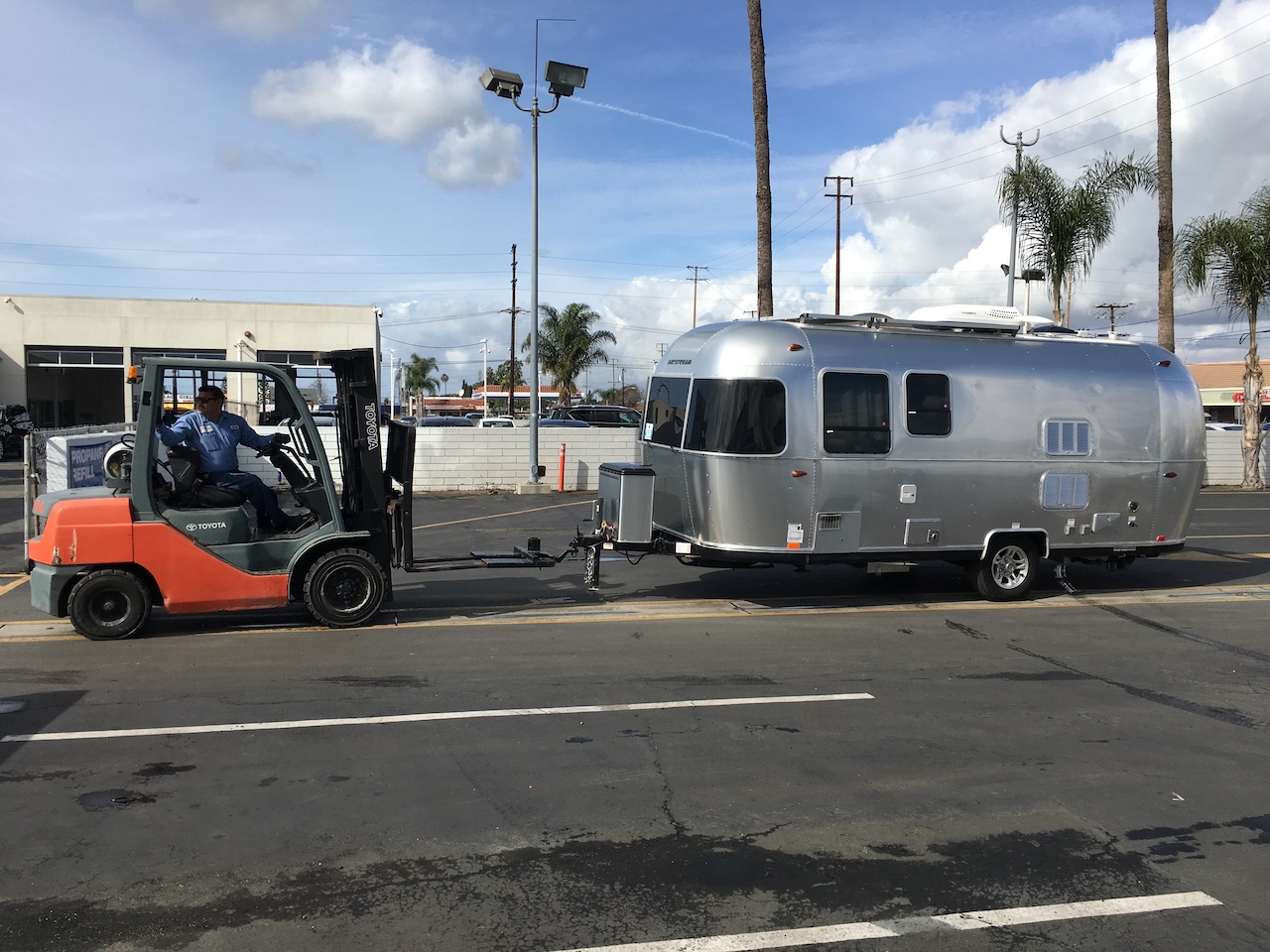 The morning of our travel day out of San Diego we found that our hot water heater was not working! Not a huge deal right away (cold hair showers in the sink aren’t the most pleasant but also doable) but we wanted to stop by a dealer on the way if possible to get it looked at.

Lucky for us, the Orange County Airstream Dealer was practically on our way and they had time to look at it! It was kind of ironic that we went here because only just that morning our friend (who we had been staying with) gave the girls an Orange County Airstream hat as a parting gift. They must have thought we were frequent fliers.

They got their little fork truck dohicky with a hitch attached to it and wheeled sweet Wobbles to their shop. They told us to run the tests they would have to run the hot water heater for a couple hours. This meant that we had a little time to kill. Beach time!

There was a beach just down the road that we all enjoyed. The beach also had a great playground on it. Though the girls spent most of their time on the beach. You know, it’s funny but 8 times out of 10 when we go to a playground the girls don’t play on it! They want to play on it but spend most of their time trying to convince me or Justin to follow them around and play with them. I’ll do this to help them acclimate to a new space but really, I feel like this is their time to go off on their own! I’d like to sit down and sew folks! Ha. Usually once we’re there for a little while they’ll warm up to the place and lean on one another for comfort but you can see how this doesn’t work well for a quick pop by a playground.

Ah well, the beach was more fun anyway. The girls always enjoy a good sand angel and loved digging for treasures in what the tide brought in. There was actually quite a bit of trash on the beach so we did a lot of trash pick up too. The beach was lined with lots of trash cans which was great but also made me wonder why there was still so much trash on the beach if there was such easy access to a trash can. The girls and I guessed that trash either blew there or was washed in from the water. Either way, a good community beach clean up was much needed here.

On the way back to the Airstream dealer I suggested we have olives as a snack. The girls were in agreement until out of nowhere sadness swept over our 5 year old and she started crying. I thought for sure she pinched her finger and I didn’t see it or she had bitten her tongue or something for her to get so sad so suddenly. When I was questioning her on what happened the truth finally came out. Sobbing she said, “My fingers are too big for olives now. My big thumb busts them right open.” Because obviously the best part about eating black olives is being able to put them on all your fingers and pop them into your mouth one by one! So sweet and innocent. The woes of a 5 year old. She cheered up when I suggested she just skip her thumb. 😛

After we had fun at the beach and the olive crisis was over we went back to the dealer. They couldn’t find anything wrong with the hot water heater, although they replaced a ‘thermal fuse’ just in-case it was the problem. They also offered to clean it out for a charge. I guess after using propane for a while it leaves an ashy soot behind. Justin also asked them to do the refrigerator while they were at it. In hindsight we realized these were bad decisions. We could have figured out how to do the cleanings ourselves but instead our misjudgment cost us almost $400! After minor parts and labor the bill added up. Why do we see things so much clearer after the fact?

Finding a camping spot for the night

Lesson learned. Onward we went to find a camping spot. Many of the “campgrounds” along the CA route 1 that we were traveling on were really just large shoulder pull off spots. That means cars are wizzing past your camper at 55mph! There is only so much space with the beach, road and mountains. This, however, did not sound like a good camping choice for us not to mention not a safe one! So, we kept driving.

Along our route it was windy and was sprinkling on and off but nothing too awful. Nothing too awful until we went through a tunnel. Obviously the weather change was not due to the tunnel we went through but it was like night and day on the other side. The wind was ferocious and big dark clouds were rolling in fast. All along the road we were traveling on a steep hillside met the road. The hillside did not have much of any vegetation on it and seemed to be eroding very quickly making the contents of it’s top loom precariously above us. We could see where numerous pipes were once buried underground and were not jutting many feet from the hillside and cement platforms (probably sidewalks) were crumbling with the erosion. We hoping to scurry along before the rain got worse!

Around dinner time we landed upon the Point Mugu State Park campground. The wind was still fierce but we were safely off the road. Thank goodness!