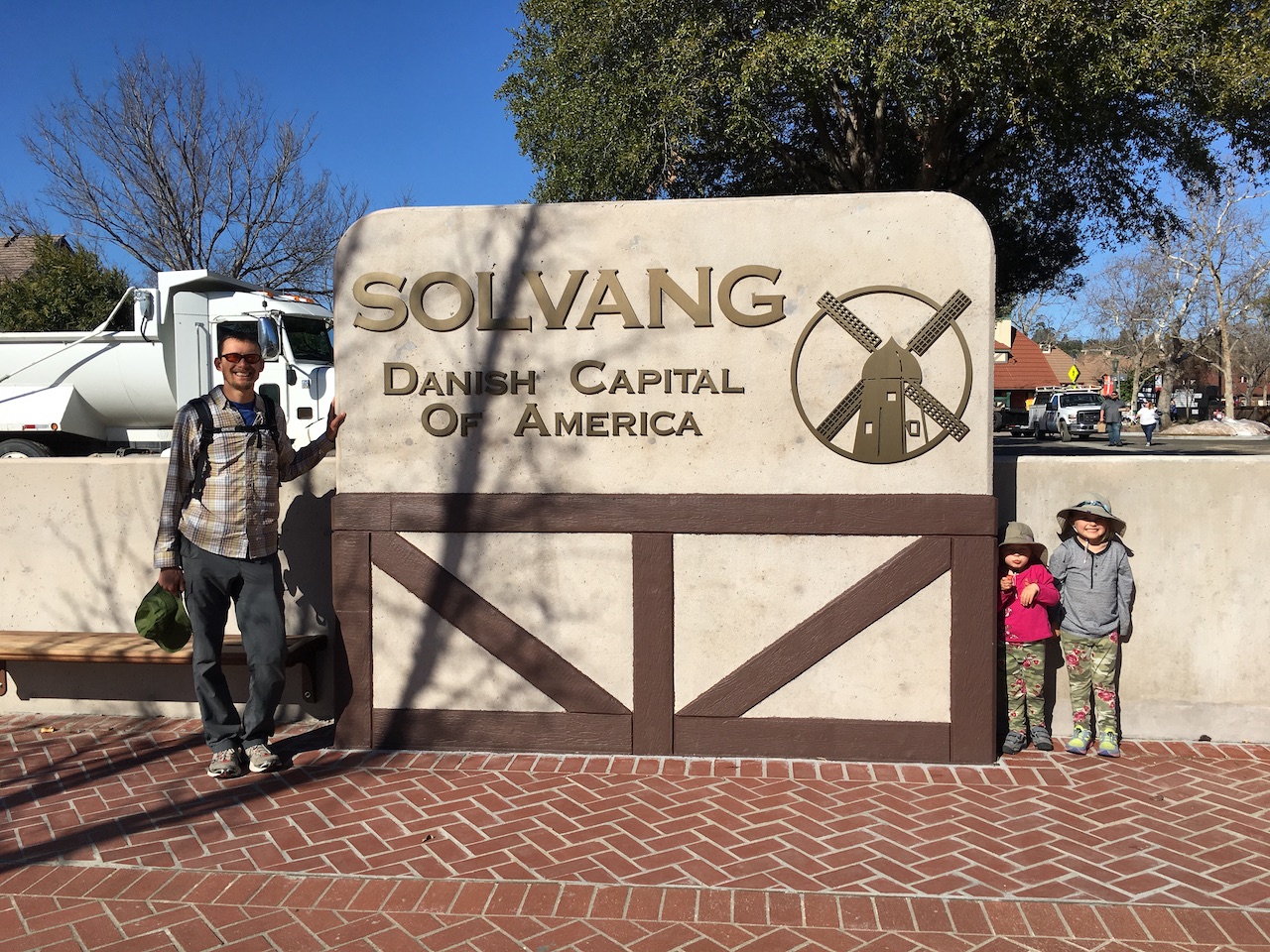 Along our way we saw that there was a little Dutch village set among the grassy hills.  Their sign boasted, “Solvang: Danish Capital of America.”  It was actually larger than we thought, the downtown strip radiating outward to lengthy side streets.  The buildings were just so quaint and beautiful we had to stop to take a peak.

Next we found an antique phone booth that really worked!  That makes 3 of these old treasures on our trip so far.  The girls were like, “it’s (the phone) making a buzzing noise.  I think it’s broken!”  Haha, that ‘buzzing’ is called a dial tone. :P. It was pretty funny to explain that in the ‘olden days’ you had to remember the phone numbers of your friends and family and when you talked on the phone you were connected to the wall.  Oh how times have changed.

We were excited to see so many bakeries in the Dutch town.  However, what we soon realized is that the Dutch like their sweets SWEET!  We went in a handful of the bakeries in town and I’d say they had 98% the same desserts in each.  Most were a very sweet dessert topped with frosting.  Even some of their bread was topped with a thick 1” layer of frosting.  Ooo!  A bit too sweet for us.  After exhausting our options we settled for a lemon poppy seed muffin.  After we bought it we realized it was filled with a sweet lemon jelly-like center.  We carved out the center and split the rest.  It was tasty!

After exploring for the afternoon we decided to camp fairly close by as it was already late afternoon.  We ended up staying at Cachuma Lake Campground.  Sadly we were only there for one night but the park was huge!!  There were over 400 camping sites and it was right on a lake.  I’m sure it is a bustling place in the summer but we were only one of two people in the dry camp sites (there were a bit more in the full hookup sites).

The park, including our campsite, had grass everywhere!!  Something we have missed for sure. We found a level campsite with a great big tree in it which contained a great hollow for the girls to play in.

When we arrived the hollow in the tree was filled with water and muck so I told them not to sit in it.  Their solution was to pick clumps of grass (the in the sections that were over their knees!) and fill the hollow.  They each took turns being “the boss” on the “phone” instructing the grass picker where to pick grass and how to arrange it in the hollow.  They made such a nice cozy nest!

It was slowly getting chillier as we headed farther north on our trip, but we were very thankful the winds had died down.  A cold breeze blows the chill right through you.  It was such a lovely campground and we’d love to go back sometime when we can take full advantage of it.