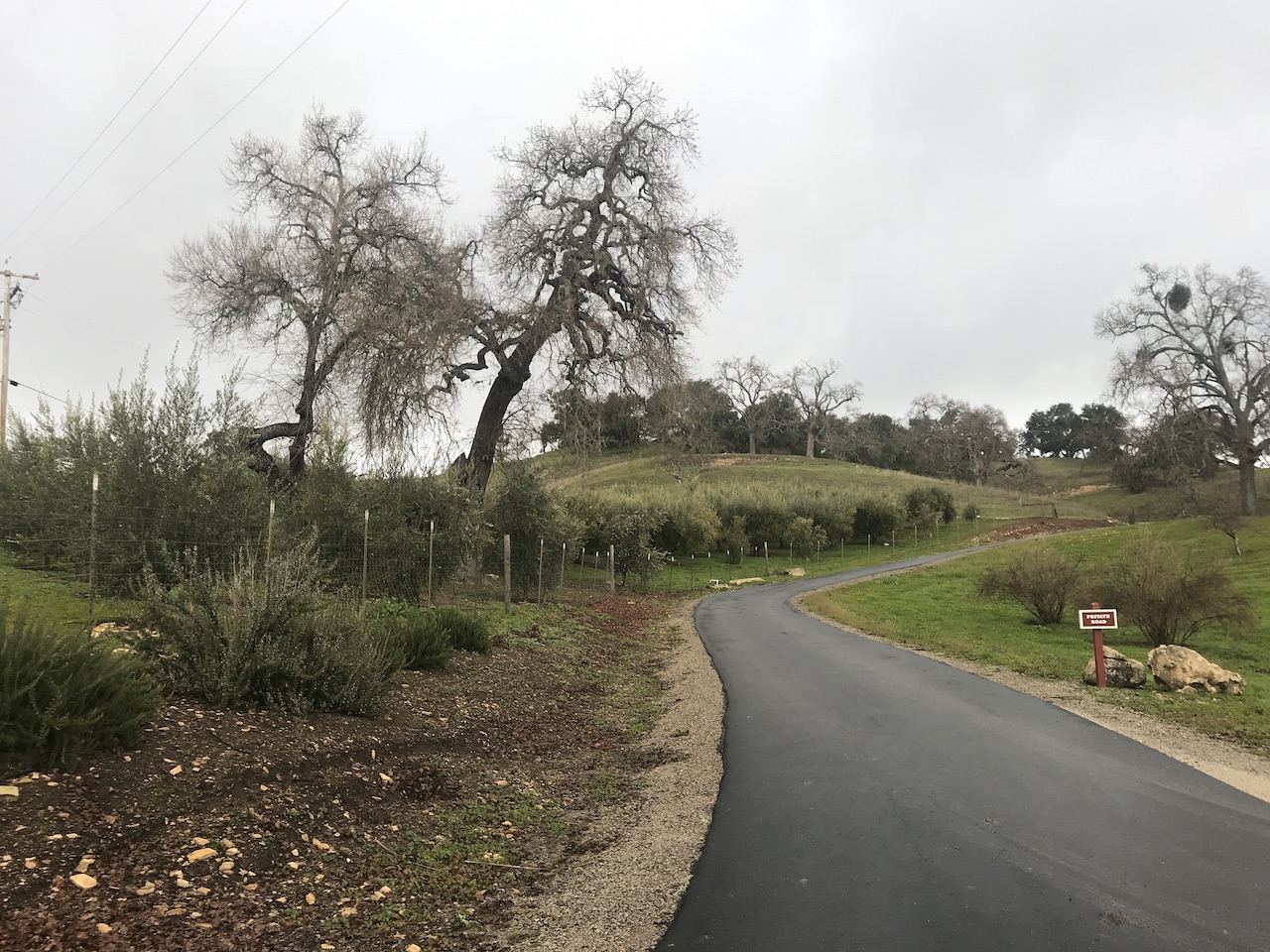 We had many stops on this California coastal drive. One of the things we wanted so badly to see was olive groves since they are so prevalent in CA. After searching for quite a bit we landed on Pasolivo in Paso Robles.

The drive to the olive grove was beautiful with rolling green hills all around. The hills were topped with trees but their steep sides were covered in vibrant green grass and low ground cover which made the hills seem almost as if they had been freshly mowed. It was such an impressive sight and felt so cozy with the green background. We had been so missing trees and green grass from all the desert traveling.

Through the rain and up and over twisty curvy roads we finally found the olive grove. We all did an olive oil tasting with some fresh homemade bread from a local bakery.

The amount of infused olive oils was impressive and boy, were they good! The server generously gave us two extra bags of bread for us to share. Our five year old couldn’t get enough of all the different infusions! It was extra delicious too because for almost every olive oil there was a paired spice blend that the server gave us to try. Both the oils and herb blends were outstanding! They had vinegar’s as well that they mix their olive oils into. It was hard to choose what to go home with.

The woman I spoke to on the phone earlier in the day had told me they normally do tours of the groves and equipment but since they were in the midst of some production they were currently not showing people around. However, when I asked our server about showing us around and teaching us the process of making their lovely oils she sweetly invited us to look around their equipment so the girls could learn more.

It is actually much more simple of a process than I had previously guessed it would be. This olive grove is special in that every step of the process from tree to selling the bottles of oil are done on the premises which makes their product so fresh. I’m paraphrasing of course but, they first hand pick the olive from the tree (picking each variety at once so that it can be processed as quick as possible from the time it was picked) and pop them onto a conveyer belt which basically separates the leaves and branches from the olives.

From here they are dumped into a giant mixer that crushes the olives, pit and all (they said the pits add richness to the taste as well as giving some good nutrients to the oil), and turns it into an oily pulp. From here it is put into a smooshing machine that squeezes out the oil. Many companies will use this pulp again to squeeze even more oil out of it in a second batch but the quality diminished quickly. After the oil is squeezed out of the paste you can use it right from the spout. However, to sell it and keep the shelf life a bit longer, the olive oil is then put into vats where they wait for the sediment to gravitate to the bottom. The sediment will give the oil a cloudy effect and is fine to use yet shortens the shelf life dramatically. From there it is bottled and put on their shelf. Not bad, right?! I told Justin I want to do this! Think of how much fun that would be to create new infusions? In my second life I’ll do this.

By the time we finished exploring and tasting olive oils it was getting late! There weren’t any great options for camping so we ended up staying on a large pull off from the main road. We had heard there are many large pull-offs along the road in wine/olive country where the authorities don’t hassle you if you stay there overnight. It wasn’t a great place by any means but, it worked!