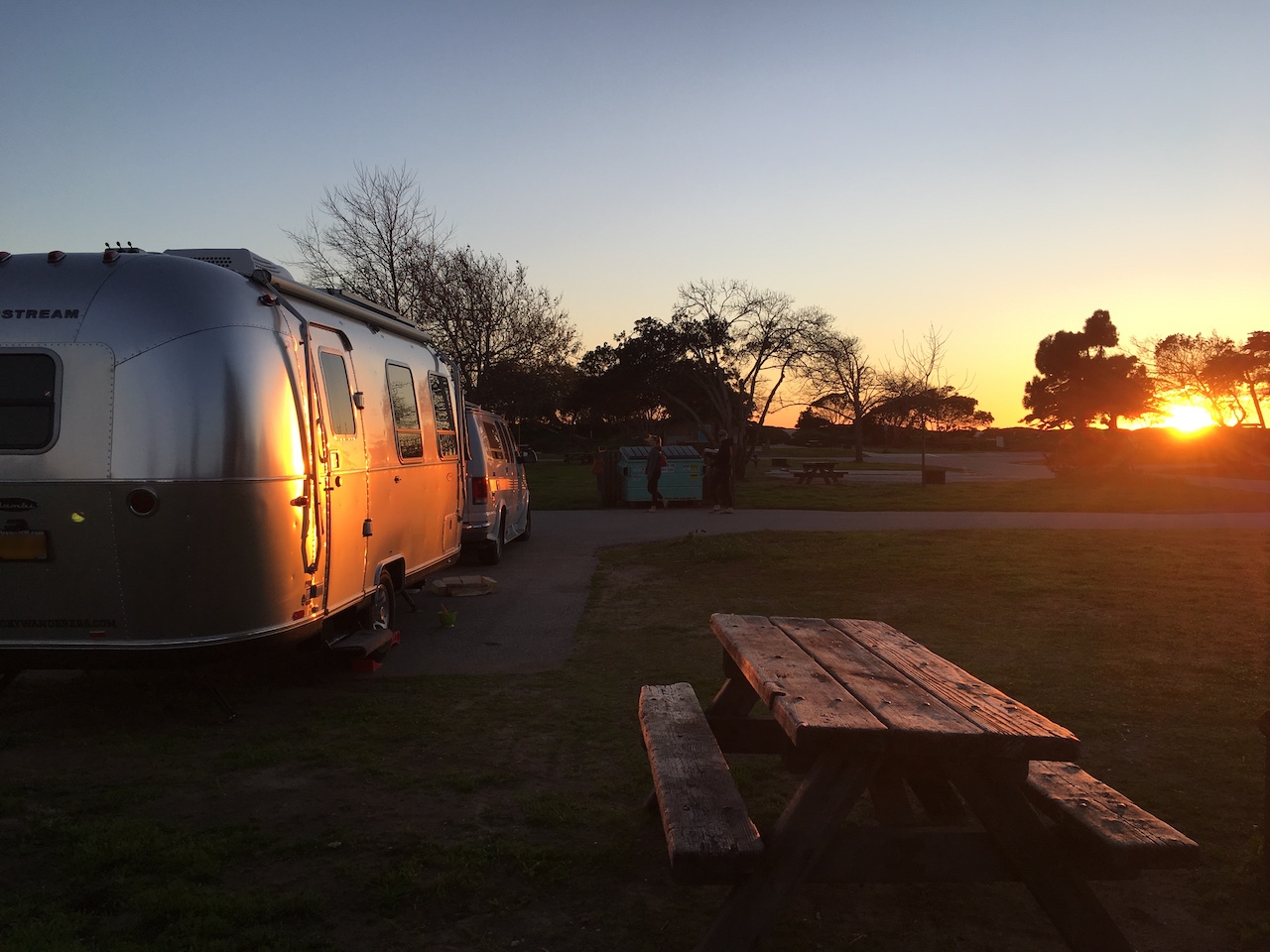 Just a little ways from the Channel Islands National Park Visitors Center we found a great group of campgrounds at Carpinteria State Beach. They were named after the Channel Islands and were located on the beach with lots of grassy areas to play on and access to a bike path that led right into town! The only down side, which was a big loud one, was the train tracks, with passenger trains that blasted horns blaring just past Wobbles. Ha!

The up side to the ear splitting honking of the train was that it went by only twice after the girls were asleep each night and didn’t start blaring again until 6:30am. On the first morning at the campground this was our morning wake-up call! Our oldest said, “I think it must be a wake-up train for the campground.” I think I’d take a rooster over this any day. There’s something a bit jarring about a train horn blasting you awake.

The weather wasn’t calling for rain or high winds so we decided to take a trip to the Santa Barbara Zoo. As we approached the zoo we realized it was probably a bad idea to pick a Monday holiday to visit a zoo in the calm after a storm. The traffic was backed up for quite a bit. However, when we walked into the place it wasn’t bad at all. There was a pay booth at the parking lot entrance which must have been the hold up.

It was a small and semi-strange set up for a zoo but it was fun to look around. They had koala’s which are just so sweet! Those little soft puff balls just make me want to give them a big hug.

We also took a ride on their miniature train. It’s route was really funny. The train riders did get to see some animals along the way but a lot of the ride was past storage sheds or the backs of buildings. Hehe, the girls didn’t even notice. They were on a train after all and loving it. 🙂

We ate our lunch at Harmony Park within the zoo which had a little playground and picnic tables to eat at. They had this really fun fake grass hill that all the kids were sliding down with pieces of cardboard. It looked like SO much fun!! So fun in fact that the girls didn’t actually eat any of their lunch! Of course they were hungry for lunch right AFTER lunch time but that’s besides the point.

I think my favorite part of the zoo was watching two monkeys monkey around. One monkey in particular was having so much fun swinging so effortlessly on a rope hung high above our heads. They are just so strong and so good at using their arms and feet to swing from. At one point, the monkey leaped upside-down and while hanging from his feet high in the air he shook his shoulders in a boob shimmy. It was hilarious! Fun day!

Unfortunately, we weren’t at this campground long enough to reap the benefits of the bike path leading to town or the walkable shops nearby. We did however make time for a beach morning before we hit the road.

The girls had a blast creating a beach fort out of downed logs, sticks, palms and other treasures. They created a restaurant/lodge on the beach serving all sorts of delicious food.

I love how creative they are and thank goodness they are getting along more times than not now. They are getting to be good ages to cooperate better with one another. Parent win!

While they played I refreshed my memory on how to use double pointed needles so I can finish the hat I’m knitting. Using them always looks intimidating but I have to remind myself they are actually quite simple. Both the girls and I also watched the surfers that were catching the waves. Brr!

We only wished our beach time could have been for longer! This last part of our trip (the last month) seemed a bit on the fast side since we chose to dilly dally in the warmer weather as long as we could. Just leaving more to see on our next trip I guess.