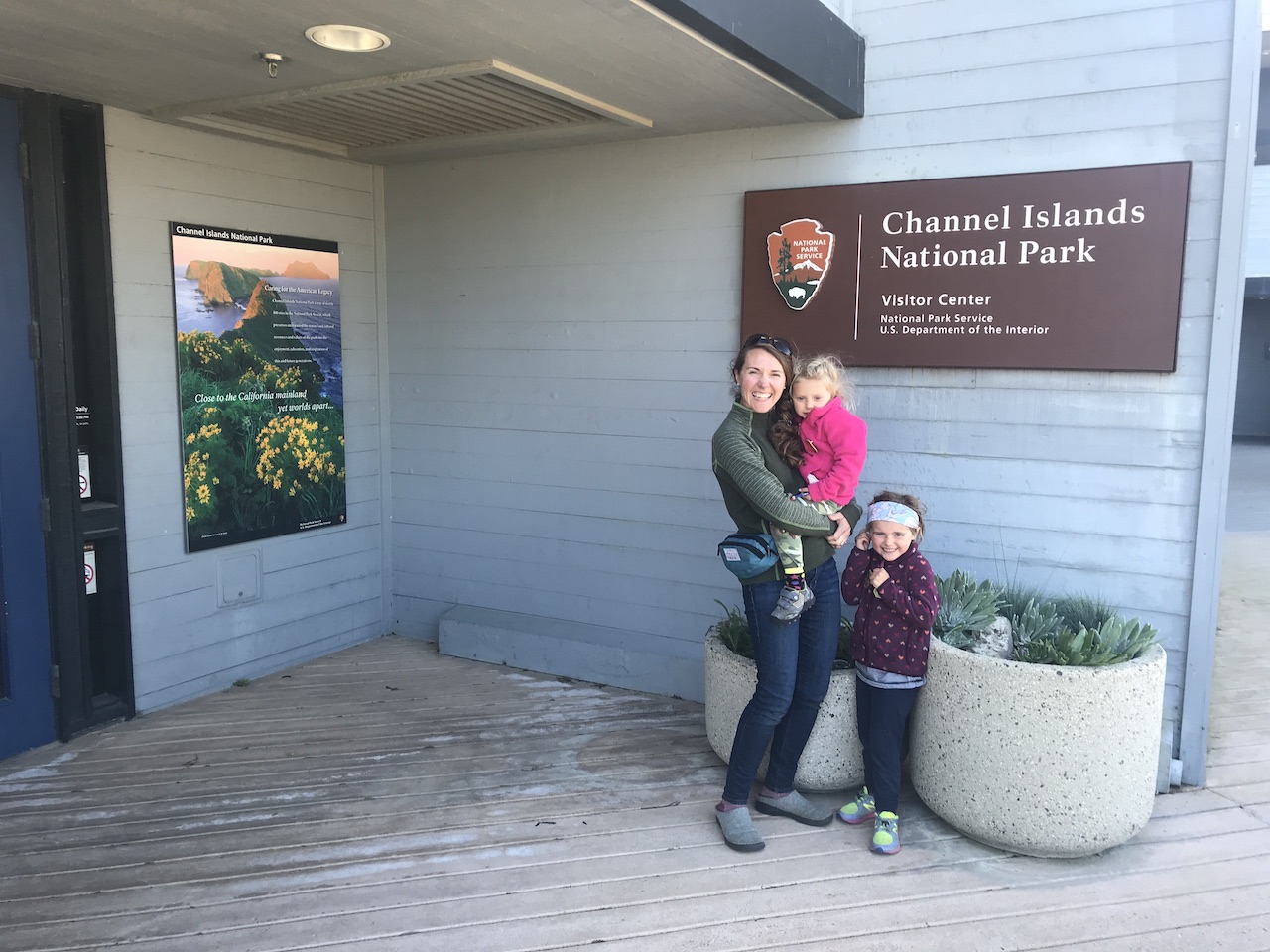 Okay, so we didn’t actually go on the Islands! The boats were all cancelled due to the crazy winds plus it was pretty pricy. However, the visitor center had an overflowing amount of information for us to soak up. Just as we love and as it should be.

On our drive to the Chanel Islands National Park we saw a fruit stand and decided it was a convenient potty stop for the girls. I went to the stand while Justin helped the girls. The produce was great with a giant bag of avocados for $5! I was getting the girls back in Dimes while I was telling Justin about the great deal I just got when I noticed, we were parked right next to a massive avocado tree!! I didn’t realize they could grow these so well there. Some were even ripe on the tree. Man, how I wish we could grow them in Portland! The last time we saw avocado trees we were in Kauai so it was really exciting to see.

The Channel Islands Visitor Center was awesome! When you first go in there is a touch and learn table where the girls got to guess what each item was such as different shells, krill, baleen (whale filter feeder system), bones and so much more. It was fun for the girls to see the actual size of some of these creatures they’ve learned about.

Inside the visitor center they also had a neat mini aquarium that is home to a shark, many garibaldis, star fish, crabs, sea cucumbers, a wavy turban shell, a funny sole fish and many more.

We were lucky enough to arrive just as a feeding was starting. The ranger got his scissors out and cut up a squid for the kids to throw in for the fish. Our girls were happy watching others feed the fish knowing it involved holding cut up squid!

Something really interesting I hadn’t realized before was that the inside of a squid looks like a piece of plastic. It looks like a clear plastic feather and it is called the cuttle bone which actually is not a bone but made of cartilage. The ranger said many sea creatures have innards that resemble plastic and that could be why so many sea creatures swallow plastic that is polluting their home. It is estimated that more than half of all sea turtles around the globe have eaten plastic. In a recent study where scientists looked at many sea turtles over 7 species 100% of the turtles were found with plastic in their gut. How very, very sad. My oldest turned to me and asked, “We can stop it though, right?” Little kids are so great about taking on big problems.

On a lighter note we also saw how massively huge elephant seals are. In the visitor’s center they had a to-scale replica of one and it was shocking! No wonder they were given their name! They are so large. We watched a video of them fighting by slamming their heads at one another. It looked ridiculous and also very painful. Later on our trip we hope to spot some in the wild as we travel up the CA coast.

While we were there we also checked out their lookout tower giving a view of the islands. However, as we traveled up the enclosed tower we heard the wind getting louder and louder. By the time we were almost to the top it sounded like people were down below throwing things at the tower. The wind was so ferocious it was creaking the tower and banging who knows what into it. I thought for sure we were going down. The door at the bottom of the tower had since swung open (it was latched when we started) and was slamming open and shut. It felt like it could have been a scene from a horror film. The girls were scared and cold either in my arms or clinging to my legs. We stuck our heads out of the top of the lookout just long enough to see that indeed there were islands out there before we practically were blown away. My goodness!

The girls both worked hard on their Jr Ranger books throughout the afternoon as Wobbles and Dimes swayed from the wind. When it was time for them to say their oath we ran across the parking lot as we were pelted with sand being ripped off the beach and at us by the wind. The girls bravely said their oaths, got their badges and we returned to Dimes safely. No wonder why the boats to the islands got cancelled!

Off we went to get a campsite for the night. We decided to leave exploring the islands to when the girls are a bit older to make it worth the cost and so we can stay on the island for a couple days.