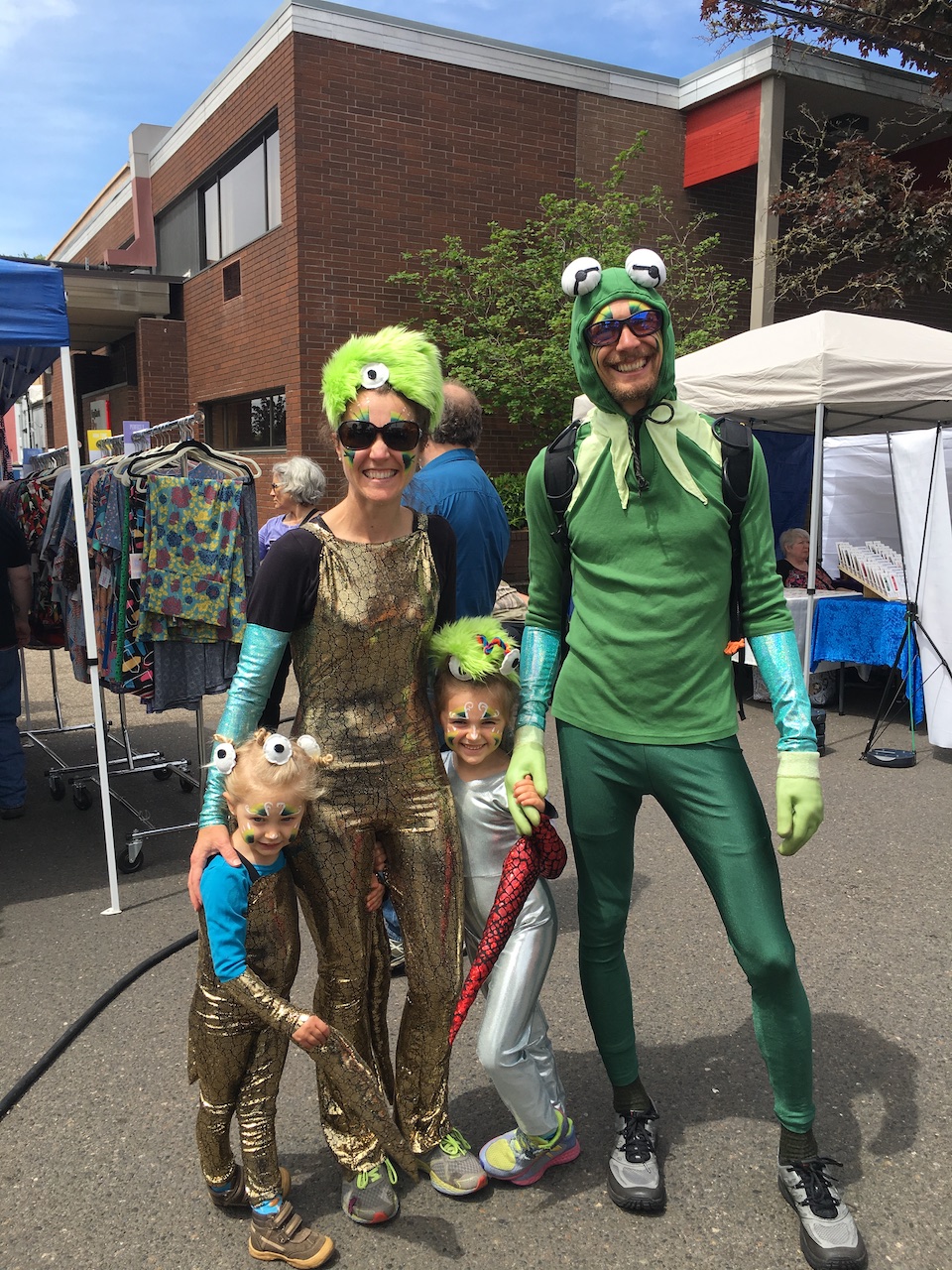 Once upon a time, Justin and I went to this very event prior to having kids.  We had a blast and thought it would a fun event to bring kiddos to.  However, for one reason or another, we didn’t make it to the event with the girls until now.

At the beginning of the year Justin and I like to put all the fun Oregon events on our calendar so we can try to attend all that we possibly can.  Therefore, we had a heads up on the date of this alien festival for a decent chunk of time.  Luckily for my To Do list, we had semi-planned to attend last year so I had already made parts of the costumes.  Justin and I had our stretchy shiny jump suits that I had made for Burning Man and luckily for the girls, I had enough scrap fabric from ours to make two tiny “alien” stretch suits to match.  All the prep I had left to do was to stuff some shiny tentacles (Yes!  Some alien’s must have tentacles, right?)

All was going well with the costumes and we were excited to test out camping in Azul for the first time!  We had completed some of our projects to Azul such as making black out curtains for the windows and the electrical work so we could use the electric cook-top and the new fridge.  Basically the bare minimum that we needed to do to make it a successful first trip.

We were all packed to go and ready to hit the road when the morning of…our 6 year old’s alien costume went missing!!  What?!  We searched the house high and low and still, nothing!  Our options were to have her not have a costume or make her a new one in a jiffy.  So, to the sewing machine I went!  Thankfully I had some shiny silver fabric that I had acquired to make myself a costume and so, after frantic measuring, in 10 minutes time it became a new alien costume for our oldest. Face paint on and we were ready to go!

On the road we went!  As we approached the event we saw an odd sight bobbing down the road.  Is it a bird? Is it a plane?? No, it’s a UFO!! It was a giant UFO attached to a telescoping boom lift going at a snail’s pace. Haha! We were definitely in the right place.

We found a school parking lot nearby and completed our ensembles which was now a breeze being able to stand in Azul! Hurray for headroom!

Upon arriving to the alien infested streets we were greeted with the sweet sound of the Unipiper! If you’re not familiar with him, he is a classic spectacle in Portland who is regularly seen sporting a Darth Vader costume while playing a flaming bagpipe and while managing to ride a unicycle. Very talented, strange and entertaining.

Soon after we found the MIB (Men In Black) aka McMinville Police Force. It was so great!! They were all dressed up in black suits with black ray bans on, their booth fully decked out in MIB garb. They had the Neutralyzer, the Cricket, you name it! They were giving out ID packets for the kids. These are the ID kits I remember doing in school where you document your fingerprints, cheek swabs and such so if you were ever lost, you could hopefully be found.

Onto the alien pet show. I’m pretty sure this was limited to a dog alien show last time we attended (I could be wrong) but this time all sorts of pets were dressed up by their owners. There was even a UFO beta fish and an alien turtle. Some were elaborate and some were pitiful but all were entertaining for sure.

People watching was a hoot as well. Many were in festive silver shine or crazy hair of sorts. You can’t really go wrong with an alien costume. You can let your imagination run wild. Speaking of running wild. One of the girls favorite sights was a set of girls dressed up in infallible alien abducting costumes. They were hilarious to see bopping around the crowds.

All this exploring made us hungry! We found a lovely Mexican restaurant to eat at before watching the parade. Mexican restaurants make us happy! They seem to be welcoming, festive, laid back and always have crowd pleasing food for our family. It got us excited to be visiting Mexico this winter.

The parade was fun to watch as well. I think every other float threw hand fulls of candy to the kids. Our girls had fun collecting it and fun giving away as well. 😛 I let them each keep one piece. I’m not a bad Mom, I promise! Our sweets look more like pie and homemade muffins. Most floats threw candy but the dairy float threw cheese sticks!! My girls were all over that! I felt like that Mom at the Easter egg hunts who is coaching her kid to snag the eggs out from under the hands of the toddlers. Okay, I wasn’t that bad, but I was cheering for each to get one!

What a day! We were pooped and ready to head back to Azul and get camp set up. Simple. Just go to the school we parked at a couple blocks away and off we go. Not so simple. Both Justin and I had failed to remember the school that we parked at. No problem, we’ll just google schools and obviously see the one within a couple blocks of the alien strip, right? Well, 9 schools came up with that criteria. Haha! We were lost! I thought I had remembered passing a giant seed building. Nothing came up on the Google map related to seed or grain. We asked passers by on the sidewalk about seed stores or local schools with the description we gave them. Nothing! We tried retracing our path with no luck. We had been wandering aimlessly for a half hour with dinner time quickly approaching and our girls patience and energy coming to an end.

Finally we figured out that the “seed store” did in fact sell seeds but it was actually a FEED store! Oh my goodness. We finally knew the direction to the van and none too soon. As we were crossing the street one block from Azul the sky opened up. The wind became fierce and it started pouring! All at once it hit us as if the sky had just been unzipped and Mother Nature came tearing out upon us. We scooped up the girls and ran like mad to Azul. We made it!! This mad dash lifted our spirits as we were all in a fit of giggles by the time we poured ourselves into the vehicle. What a day! I took a mental note to myself to always take a picture of where we parked!

That night we were fortunate to be able to stay at the Evergreen Air and Space Museum parking lot. They allow folks to stay for free for two nights. It was amazing!! We were parked smack dab next to an airplane. When we looked out our window we could imagine ourselves flying!

In addition, the girls got full reign over the amazing playground they have.

There were also lots of planes scattered around the parking lot as well as an old rocket that we could explore the insides of. It was absolutely perfect! In the morning we discovered that Evergreen also had an old picnic area within a grove of old tall trees. The picnic tables were mostly overgrown but the path leading around them acted as a lovely morning walk for us.

Our first test trip in Azul was a success!! We learned a couple things here and there that we will change the next time around (lights we need to cover up or shades I need to make) but nothing major.