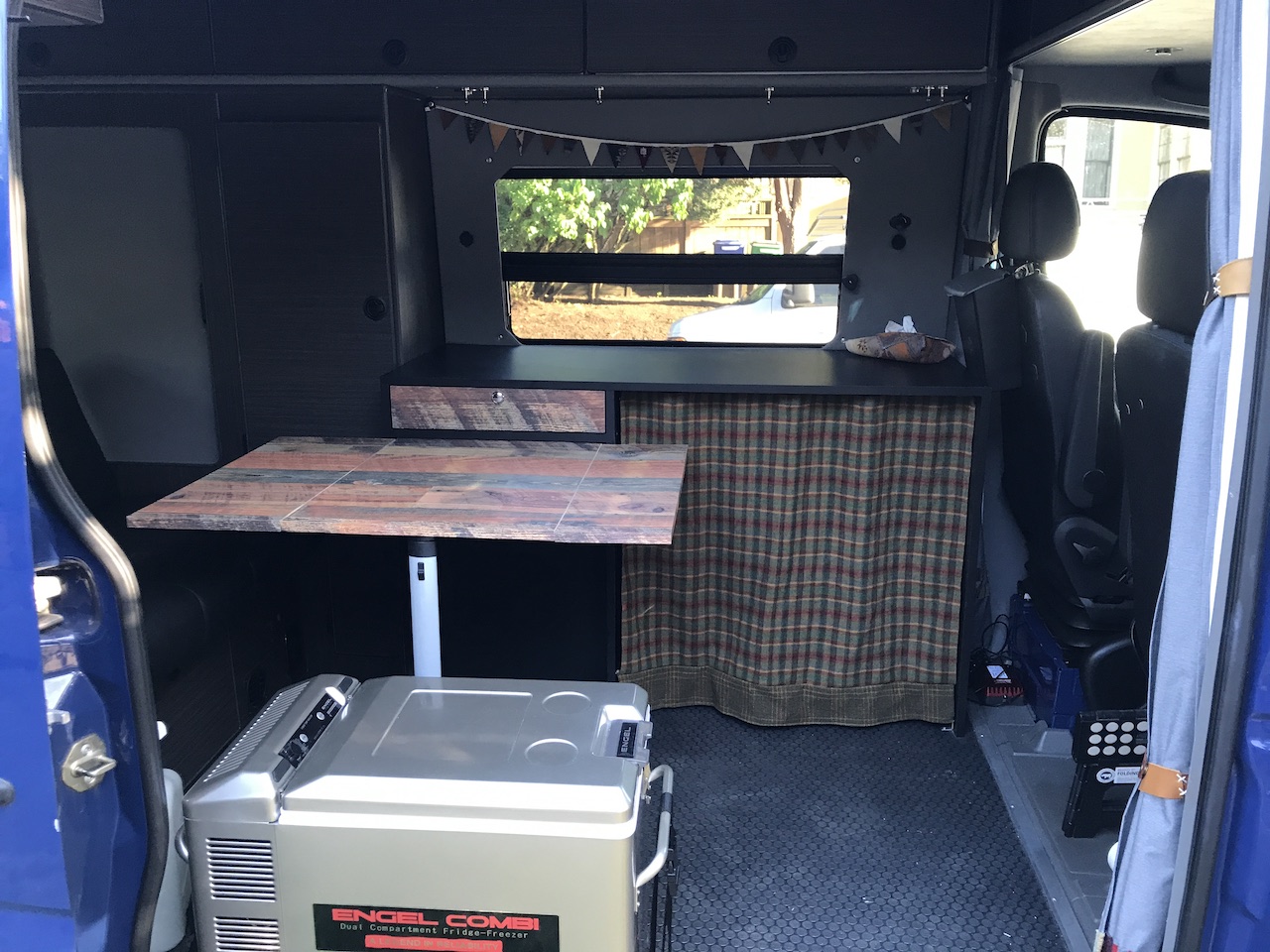 When we bought our van, Azul, from its previous owner it had already been partially converted into an RV by Sportsmobile. Additionally, the previous owner had built a large counter for food prep, etc. However, the van did not have a good table for the 4 of us to share a meal inside (for cold mornings, rainy days, etc.). It also didn’t have a fridge or water source.

The really nice thing about the existing counter that the previous owner built is that it was completely open space underneath it. This provided a very large storage space, which we used to store a bike trailer and kids bikes.

I wanted to make sure that my design preserved this open storage space. The obvious place to locate a fridge would have been under the “kitchen counter”, but instead I decided to mount a cooler-style refrigerator (opens from the top) next to the sliding door. This preserves the under-counter storage, allows fridge access from outside the van, and doubles as a bench seat.

As with all my recent projects, I started with a Sketchup design:

The flip-up table design has two table leafs that fold out using Soss hinges that are embedded in the plywood and invisible once the leafs are open. There’s a single table leg that folds up allowing the table to fold down and be stowed into its stowage pocket.

I had 3 new skills to learn as part of this build:

To match the existing black finish of the counter top, I bought some formica laminate (basically a thin sheet of plastic that’s glued to a thin wood backing). I did a lot of research on how to best glue the laminate to the plywood.

One method is to use contact cement– a kind of glue that bonds immediately on contact. However, these glues generally have very nasty fumes that cause all kinds of potential neurological damage, and I decided that I didn’t need any extra brain damage at the moment.

Another method is to use a regular wood glue along with a large press to clamp the laminate in place while the glue dries. However, I don’t have any such press.

Therefore, I went with approach number 3, which involves wood glue and a hot iron. I was skeptical this approach would work. You’re supposed to paint wood glue onto both the laminate and the plywood, wait for the glue to dry, then place the laminate on the plywood and iron it on. The heat from the iron is supposed to re-activate the glue while it’s hot, but then the glue immediately dries when the iron is removed. This eliminates the need for a press to clamp the laminate in place as there is no drying time.

To my surprise, this actually worked! Not perfectly– sometimes I had edges that didn’t stick well enough, and I had to squirt a little wood glue in and clamp it.. but for the most part, it worked. After ironing, the excess laminate is trimmed off using a router.

I wish I had taken some pictures of this step, but to be honest it was a miserably hot day and I was working out on the sidewalk in full sun, and just wanted to get it finished!

I bought a jig specifically for the SOSS 204 hinge and used my router to mortise out slots on the edge of the plywood for the hinges to fit into. The jig was very precise and worked amazingly well …. however, I noticed that my mortises were not perfectly centered on the plywood edge. By the time I realized what was happening, I was too far into the work to start over. The problem was that my “3/4 inch plywood” was not actually 3/4″ thick. Doh! The jig was designed specifically for 3/4″ thick wood.

That wasn’t the worst off it though. As it was getting dark out I was in a race to finish mortising the last 3 of 12 total mortises. I finished, and was marveling at my handiwork … when I realized that the last 3 mortises weren’t in the right spots … I had measured from the wrong side of the board! Not only were they in the wrong spots, but they overlapped where the correct spots were.. meaning that I couldn’t just mortise more holes next to them. Defeated, I went to bed.

The next day, with some fresh resolve, I went to Home Depot and bought some Bondo wood filler. To my surprise, the Bondo worked incredibly well. After waiting just 15 minutes for it to dry, I was able to mortise new holes right into the dried Bondo. The project wasn’t ruined after-all!

I wanted to make a strong drawer box, and I’d always been interested in learning how to do dove-tail joints. When we added drawers to Wobbles, I ordered custom made dove-tailed drawer boxes. I figured this time around I could buy the jig to do it myself for about the same price.

I ordered a Porter Cable jig, and when I received it I practiced a bunch before I started on the real drawer. It definitely took a lot of finesse to get the jig set up just right. Once it was set up, things went pretty smoothly, although I did have some problem with tear-out (the top layer of the plywood ripping out).

I made 2 drawers– one for the kitchen area, and one for the rear of the van to keep tools in.

Despite the blunders mentioned, the table came out great. I embedded strong magnets under the laminate which hold the leafs in place when folded and hold the table in place when it’s folded down and stowed.

1 Comment on “Building out the kitchen of our Sprinter van”