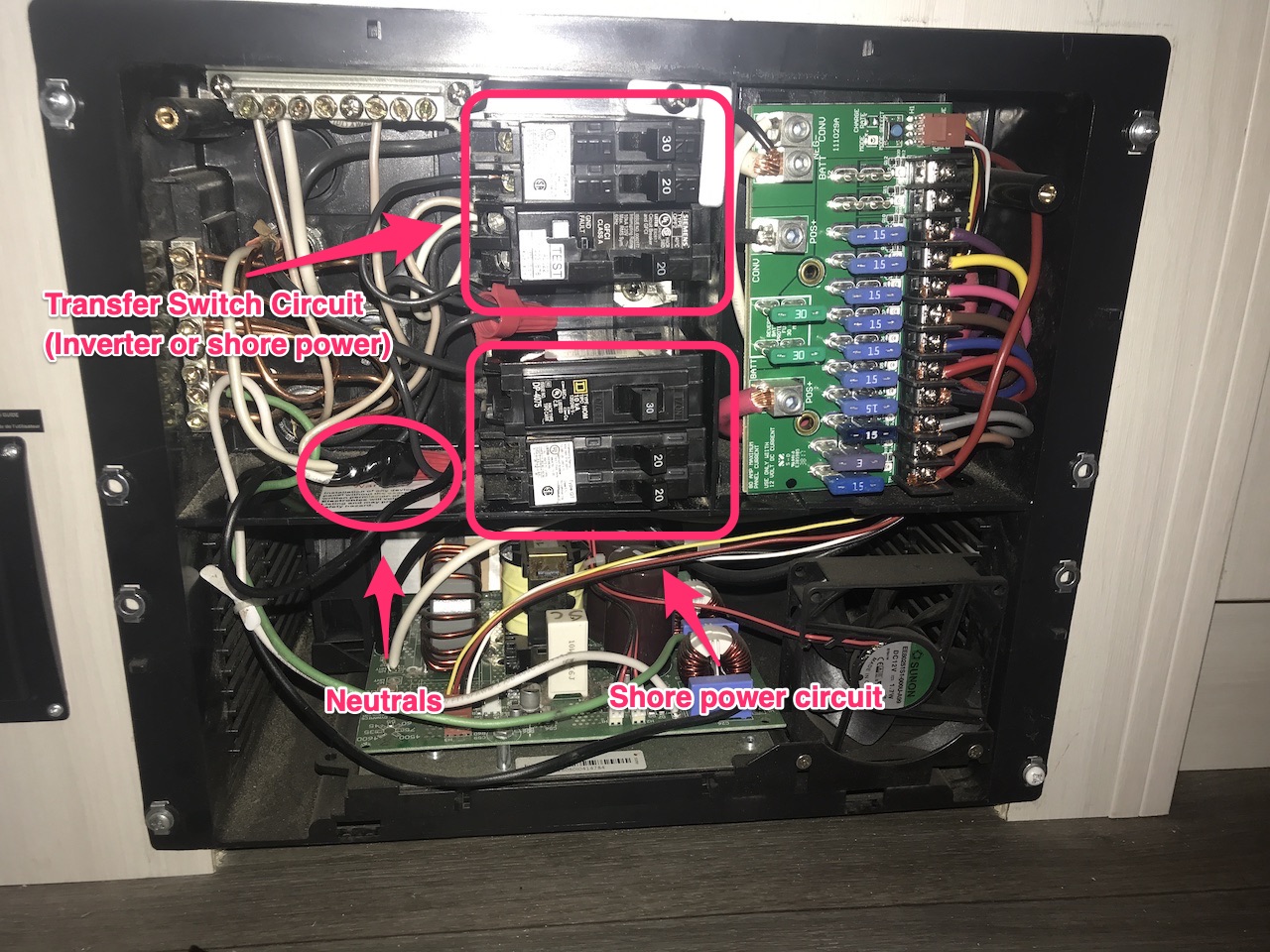 Last year I installed an inverter in our 2018 Airstream Sport 22FB. The inverter has worked awesome so far, but I did create one problem. When the inverter was turned on it would power the battery charger, created a power loop that quickly drained the battery unless we manually turned off the charger at the breaker panel. In this post, I finally fix the problem.

I didn’t want that hassle in our Airstream .. and besides, the inverter I installed was large enough to run some of the appliances, such as the microwave, so I wanted it connected to them.

So when I wired up our inverter, I wired it directly into the 110 volt breaker panel, after going through a transfer switch (a relay which switches between the inverter and shore power automatically). Thus, when the inverter was turned on, it powered everything in the rig just the same as the shore power did.

For the most part this worked great. However, as I mentioned above, each time we switched between shore power and inverter power, we’d have to remember to turn off the breaker for the battery charger. If we didn’t, then we would create a loop: the battery powers the inverter, the inverter powers the charger, the charger charges the battery. It would be awesome if that loop magically created perpetual energy. Unfortunately, because there are inefficiencies at each stage, it actually drains the battery. Further, the charger can use about half of the power that the inverter can generate, which means that if it’s left on, there’s not enough power left over to run other major appliances.

The harder part was ensuring that the charger circuit still was properly protected by a circuit breaker. I spent over an hour searching the internet for a small circuit breaker box that would hold just one breaker .. but I couldn’t find such a thing. Circuit breaker boxes are huge, and there just isn’t enough space in our Airstream to install a second breaker panel (at-least without being a hideous eyesore).

So I decided the way I was going to tackle this was to turn the existing breaker panel into two. After ensuring the power was completely turned off, I removed the breakers from the breaker panel to expose the bus bar behind them.

In our Airstream, there are 5 slots in the breaker panel and only 3 are used. Therefore, my plan was to separate the bottom 2 slots onto a separate circuit. I removed the bus bar and, with a Dremel cut-off tool, cut it into two pieces. I cut off as much extra metal as possible to ensure a large gap between the two pieces.

I purchased an additional 30-amp breaker to install as the “shore power main”, and also moved one of the dual 20-amp breakers from the top section down to my new separate lower section of the panel. I brought the battery charger circuit and the air conditioner circuit down to the bottom section (I didn’t want the air conditioner on the inverter circuit either as the inverter can’t generate enough power for it).

I then ran a new 10-gauge wire from the shore power (after our surge protector but before the transfer switch) into the breaker panel and hooked it into the new 30-amp “shore power main” breaker.

I also took the neutrals for the charger and air conditioner out of the neutral bus bar and connected the shore power main neutral to these two other neutrals directly with a wire nut.

Below is a crude diagram that shows how the circuits are now wired:

And that’s that! No more forgetting to turn off the charger.