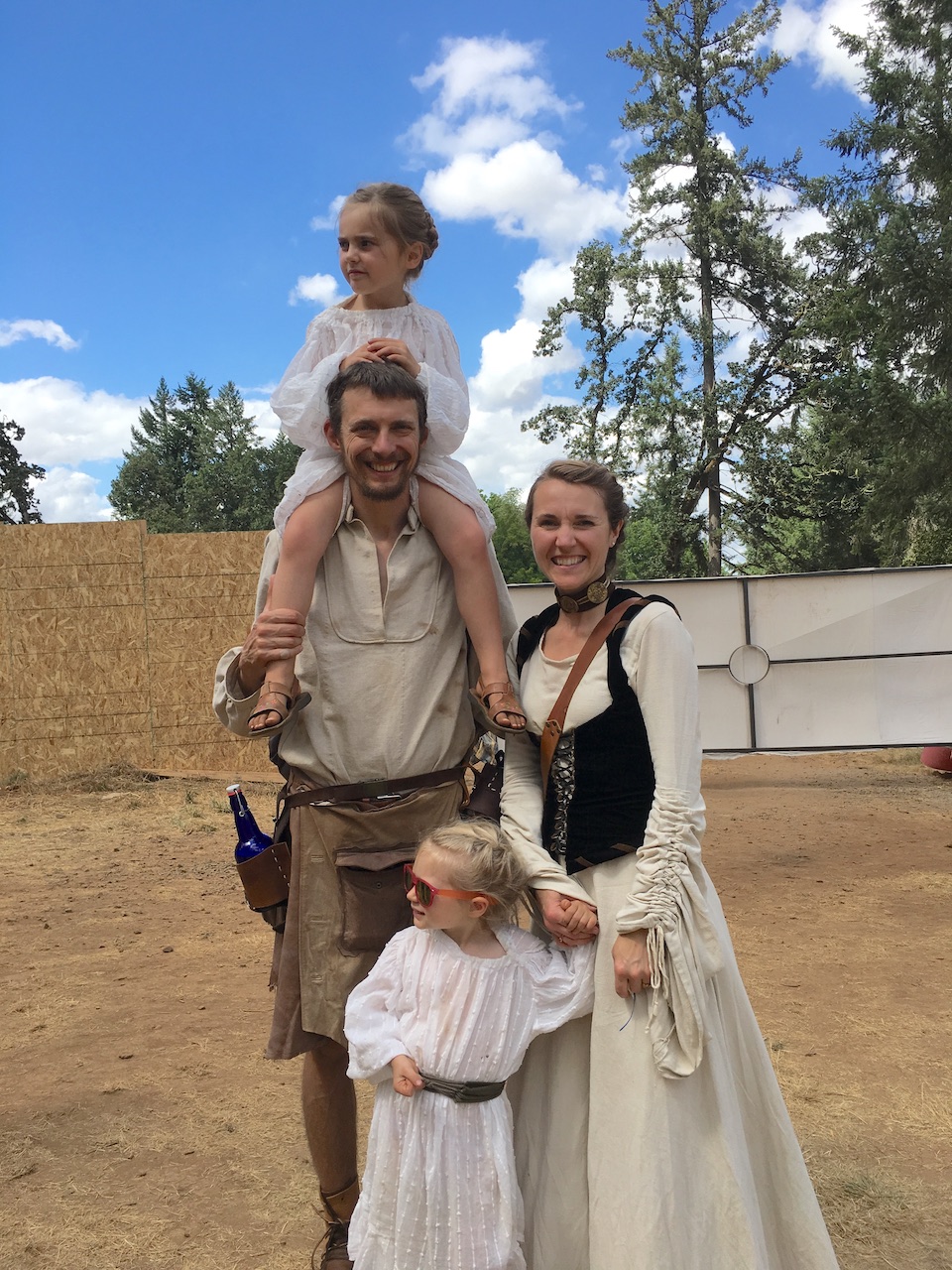 We have been wanting to attend a Renaissance Faire for years but never felt ready for it costume wise and didn’t feel good about going to it without some solid medieval costumes. Well, this year we prepped! By prepped I mean Justin was my continuous reminder to make family costumes for the faire; in a good way of course.

The task of making 4 good medieval costumes was exciting but a little daunting none the less. I decided to give Justin and I a solid costume and for the girls go with something 1: practical 2: simple (since they grow out of things so quickly) and 3: light weight (to decrease complaining and overheating the littles). That seemed more manageable. For the girls I ended up making them flowing extreme light weight white dresses out of sheer curtains I already had and waist corsets out of some pho dark green suede and some shoe laces I had from a table runner and old sneakers. Yes, the white was probably going to be not white for long but it was practically a free outfit that will last for 1-2 years time. Plus, they’ll look more the part if they are a little dirty. When they are a little older I’ll make them more involved costumes but I’m waiting until my little sprouts stop growing so quickly!

For Justin’s costume I had previously made him a period tunic out of old linen curtains and a pair of lederhosen which he was able to wear the bottoms of his medieval outfit. The only thing I had to make was a half hooded cloak out of pho green suede. Not bad!

For my costume, it was another story. If I was going to make it, I was going to go all out. I ended up finding a picture of a dress I really liked on Pinterest, creating a pattern, buying NEW fabric and making a linen dress as a base to so many different options. You have to start with a good base to get a solid medieval dress. I then created a vest out of black velvet and leather accents to wear over the linen dress as well as some jewelry made from wooden pogs (for mock coins) and scrap fabric. In the future I’ll create an additional dress to go over the linen dress and under the black vest but for this year, I was done. I tell you, I don’t think I was meant to be born in this modern era sometimes. Maybe I’d do better in the medieval times or Little House on the Prairie days?

These festivals give us the chance to take a giant leap back in time! And, it quite honestly does feel like you are in another time period when you’re there. We learned some common phrases spoken in the 1500’s but as a whole, it was really a different language. Doth, thou, thine, thy…it gets confusing! Our favorite was, “Wither be the privies?” It means, “Where is the bathroom?” We took every opportunity to ask this to folk. 😛

Driving the faire was pretty funny. It’s a good thing women back then didn’t drive cars because I could hardly pack myself behind the wheel! Finding the shifter through all the fabric was another issue. Pretty funny looking none the less.

The first faire of the season was in Canby, OR. The people working at the faire were so friendly and vert much in character making it all the more a surreal and exciting experience. The Oregon Renaissance Faire was nestled in a wooded area giving the place an even more authentic magical feel.

We were greeted by pirates, gentleman, peasants and the girls’ favorite, fairies! The fairies spoke their own gibberish language and went around as jolly as can be dusting people with their pixie dust, playing with giant flowers and dancing merrily. It was such fun!

There was jousting, sword fighting, archery, tournaments on horse, a roaming pickle vendor, a blacksmith, dancers, leather workers, shoemakers, harpests, performers, and instruments of every kind! I knew almost none of the instruments being played by musicians there. I don’t consider myself an expert on identifying instruments but I’m also not a novice. Most instruments being played were of times long ago. Such different and interesting sounds.

Food options were limited there. However, they did have good old turkey legs and corn on the cob! I’m not much of a meat eater, but for some reason turkey legs are irresistible. They remind me of when I was little getting them in Disney World. The girls and Justin thoroughly enjoyed their corn. We took a mental note to bring our own lunch next time since there wasn’t much of a healthy selection.

The kids had fun taking turns trying on our friend’s chain mail. Boy, it’s heavier than it looks I’ll tell you that much! Those warriors with long hair must have had it pulled out all the time.

Justin had fun shooting some arrows. It suited his costume well.

We all attended some of the variety shows that were offered at the Faire. There were beautiful dancers, funny and talented folks putting on a rat and cat circus and a sword swallower. I wasn’t a fan of his humor in the slightest but our friend did get to go up on the stage and pull a sward out of his throat, so that was neat for sure! Not everyone can check that off their bucket list.

There were also giant wooden rocking unicorns for the kids to ride! The craftsmanship was phenomenal! They were hollow like the Trojan horse and their horns were made of twisted glass.

The most fun part about this magical place was being able to spend it with our good friends. We are so lucky to have them in our lives and felt so fortunate to share this adventure with them.

The second faire we attended was in Silverton, OR. We didn’t know what to expect. Would it be the same vendors as before? Same set-up in a different location? We were surprised to find that it wasn’t a repeat of the last Faire we went to (though we loved the first).

We were staying at Silver Spur RV Park just a couple of miles from the Faire. We snagged the last open site when we semi spur-of-the-moment decided to go. The plan was to make it into a test trip with Wobbles and Azul as well as give me some adult time with a friend who was meeting us there. On Saturday our family went to the Faire and on Sunday, Justin and our friend brought all 4 kids to the faire while my friend and I went for a hike at Silver Falls State Park.

On the first day of the Faire we had a lot of fun watching tournaments and enjoying the kiddo activities it had to offer. This faire definitely had more kid focused actives and events than the last we attended.

There was a rat hunt that the kids could play that at random would “give them the plague” which required them to go to the medic tent and be cured before continuing the hunt. Clever! There was even a little fairy land for kids complete with a tea party with dried fruits and delicious sweet tea. It was so precious!

I also discovered a new craft I’d like to pick up someday in the near future; weaving on a small scale on an Inkle loom! I was able to try out their larger loom but some of the looms were so tiny it could semi-easily be kept at your feet in a car to pull out on long trips. The women at the faire had some very lovely products made with the tiny loom. Just another way to keep me busy!

The second day when Justin, the girls and our friends went to the faire they explored even more than the first. They even got to meet the Queen herself!!

Our oldest also became brave enough to ride a horse for the first time.

Meanwhile, on the second day my girl friend and I hiked in Silver Falls State Park to see the many waterfalls and have some quality time with each other. It was such a lovely hike and always such a joy to have time with such a sweet friend. What a treat!

As far as testing out Wobbles with the new bunks and gadgets…it went great! There were some minor adjustments that we had to fix up but nothing major (thank goodness; no more projects!!!!). Justin and I now have a standing table above the girls’ smaller pull-out table which works fairly well.

One adjustment we did have to make is to the top bunk. I found our poor oldest one sound asleep but hanging by her bottom from the rungs of the upper bunk. The sweet little thing had one leg on either side of the rail and was asleep there!! We have since put a pad that attaches to the side of the rail so that won’t happen again. Yikes!

It was also on this trip that we made the discovery that our half griddle on our outdoor grill worked amazingly well for pancakes. Pancakes is always a must have while we are on the road camping but prior to this trip it involved much effort. I previously cooked the pancakes inside Wobbles in a skillet which would hold a max of 4 pancakes. It also involved cranking the vent fan on high for fear the smoke detector would go off from the sizzling butter in the pan.

With our new revelation for cooking pancakes we have ordered the other griddle side for the grill as well. That will multiply our pancake production from 4 to a whopping 12 pancakes at a time!! I get to eat breakfast with my family now on pancake mornings!!