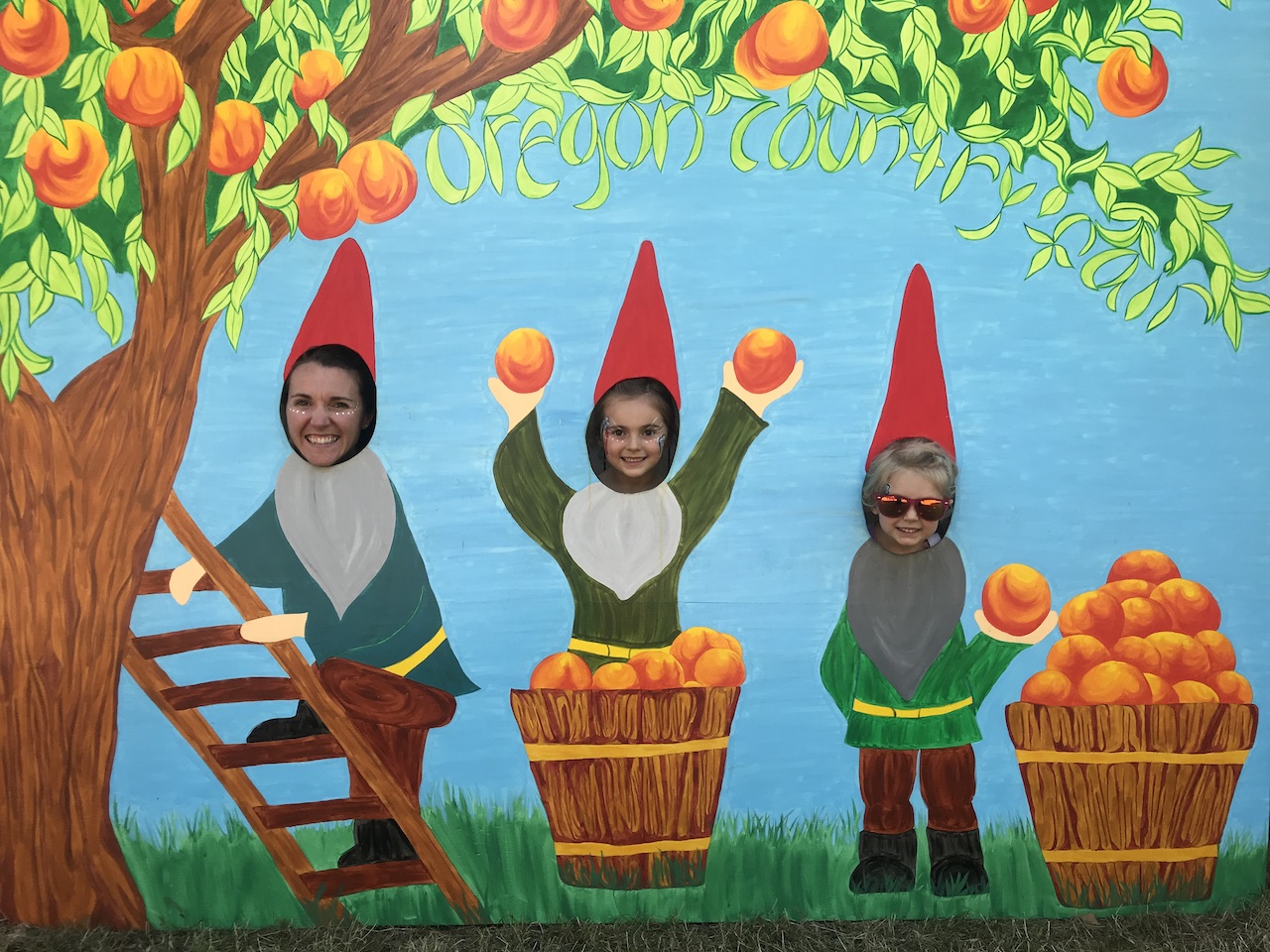 Oh Country Fair!  We had wanted to go to this festival for years but didn’t think the girls were old enough to walk on their own feet for that long so we had passed. We finally did it this year and it was like a Renaissance Faire mixed with Burning Man and a hippie concert.  It was fun!

We ended up staying at a sweet little camp within walking distance to the Fair.  The “campground” is someone’s land that used to be a horse farm.  We chose this one in particular because it was family friendly which meant smoking and loud music was not allowed.  Everyone was SO friendly and they had everything set up so cute.

The main barn was full of family games like mini golf and foos ball and the old horse stalls were converted into shower stalls.

There was also a sweet little tree swing that the girls loved to swing on.

This was our second trip with Azul and the longest stay thus far for 3 instead of 1 night.  It went well and I happily used the lovely bucket shower contraption Justin got me to wash me hair in.  It’s a USB chargeable pump that sucks water in one end and pumps it out the other with decent pressure (and I’m picky about water pressure).

We had fun with face painting every day and jagua (like henna) to class up our outfits. Jagua is potent stuff that, as we learned the hard way, stains anything it touches even if a flake only touches the skin for a moment.

We didn’t really know what to expect so we brought a variety of different costumes.  The first day we played it a little safe with costumes since we didn’t know what the norm was.  We soon found out that anything was acceptable (think Burning Man).  One of our favorite costumes we spotted we named Beaded Booty.  It was worn by a woman in her maybe-70’s and was basically a one layered beaded skirt with no bloomers.  It made us all chuckle especially since her husband was wearing a long sleeved plaid shirt with jeans and work boots.  The dress code in their house clearly is on a spectrum.

Other costumes were amazingly detailed and outstandingly beautiful!  There was one man dressed as a faun.  Our oldest and I had just finished reading “The Lion the Witch and the Wardrobe” so seeing this faun playing the flute just like Mr Thomnas was magical.

There were great vendors there selling all kinds of beautifully hand made goods.  The leather shoe booths especially caught Justin’s eye as he had been looking for some nice leather moccasins.  What was supposed to happen was he would invest in me taking a shoe making class that I have been eyeing for years so that I could learn to MAKE him some boots.  But, he got a little antsy and there was a great pair from a local artist right there under our noses.  It was a very big decision that we mulled over for the duration of the fair but he ended up taking the expensive plunge and investing in a lovely pair of very well made moccasins.

Side entertainment was something that was not lacking at the Country Fair.  When we first arrived we sat and watched ladies on aerial silks for quite some time before realizing that we actually hadn’t even entered the fair!  These were just the entrance performers and there were so many more to follow.

We saw our share of musicians, side shows, concerts, circus performers and other very talented people when we happened upon them while walking along the paths.  There is something to be said about a place that has spontaneous marching bands erupt out of what seems like nowhere.

There was also a piano sing-along in a side nook which the girls loved because it also housed an interactive puppet controlled by people off in the far distance.

There was also a trash fashion show. After last year’s fair some people went dumpster diving and make a fashion show out of their findings (wrist bands, tents, Country Fair programs, etc).  It was actually quite impressive and very thrifty!

The place was all that more amazing as well because of the awesome environment.  The fair was strewn throughout the woods as if you were exploring little gnome trails in a little village.  The wide paths were more pleasant to walk through than the narrow ones as there were SO many people there!  The narrow paths created a pinch where we carried the girls for safety’s sake due to shoulder-to-shoulder foot traffic.  It was very dusty and HOT but was still a really neat place.

Because it was so hot we couldn’t resist giving in each day to the high prices of a hand dipped chocolate covered coconut milk ice cream bar from the Coconut Bliss cart.  The booth was so nicely placed next to a relaxation area; the ground covered in carpets and pillows and the borders made of sheer drapery.  It was the perfect place to enjoy our treat.  I saved the popsicle sticks to use for crafts. We came to the shocking reality that we had eaten $60 worth of ice cream bars by the end of the fair weekend!!!  Yikes!

We have learned some valuable things for next year if we go.  One being to bring our own icy treats! :P.